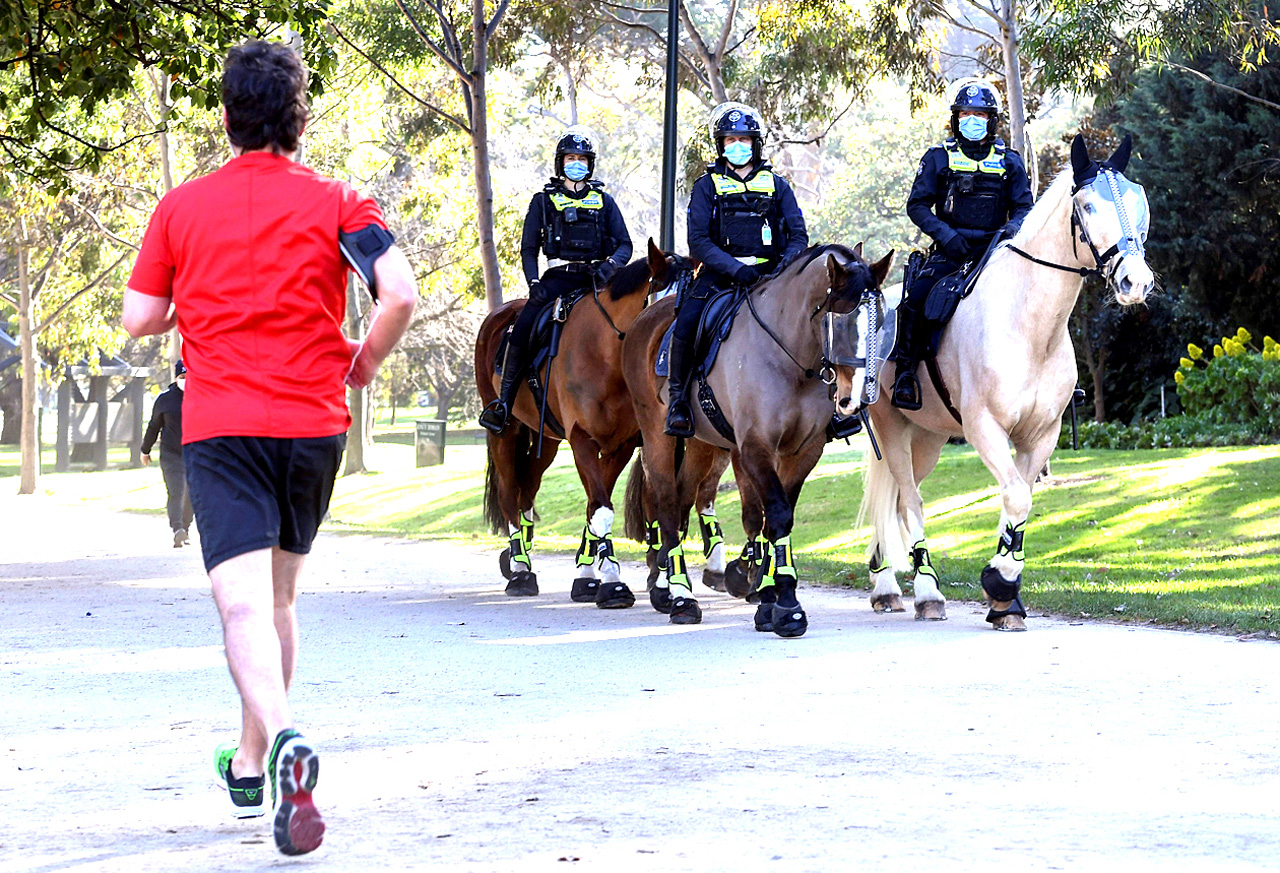 Police on horseback patrol The Shrine of Remembrance enforcing the wearing of face masks in Melbourne. — AFP photo

MELBOURNE: Hopes that Australia may have escaped the worst ravages of the coronavirus pandemic were fast fading yesterday as a growing outbreak in its second-largest city has officials eyeing draconian measures to curtail the spread.

With hundreds of new infections emerging every day despite people in Melbourne entering a fourth week of lockdown, many on the streets told AFP they were saddened and anxious.

The virus has forced millions back indoors and behind masks weeks after the country thought the epidemic had been tamed.

“All you do is go to work, come home if you’re working — if you’re unemployed, you rely on government social security.”

Victoria state Premier Daniel Andrews said the city of five million and surrounding areas would be stuck in ‘limbo’ unless they could cut infection rates.

He announced more than 600 new cases yesterday and eight more deaths, nearly all in Melbourne.

“We’ve stopped it from getting completely out of control … but we haven’t been able to suppress it sufficiently,” Andrews told media.

Without a drop in infections, it was an ‘absolute certainty’ that any rollback of restrictions would see cases spiral out of control, he said.

The resurgence of the virus has been largely blamed on security bungles at hotels used to quarantine international travellers that allowed Covid-19 to leak into the community.

But Andrews also blamed the continuing rise in cases on those flouting the rules — including people with the virus leaving their homes instead of quarantining for 14 days. A quarter of those doorknocked by inspections staff on Thursday were absent.

“It’s almost impossible for us to see businesses recover and survive unless and until we get these numbers down,” he said.

Yesterday’s 627 new cases in Victoria were a drop from Thursday when the state recorded the nation’s highest daily toll to date with 13 deaths and 723 cases.

Many of the recent fatalities were connected to aged care homes in Melbourne where government disaster relief teams have been deployed to replace infected staff. — AFP