Tuesday, August 11
You are at:Home»News»Dr Chin: Individuals referred to hospitals but not taken into account as SDMC cases part of precautionary measures 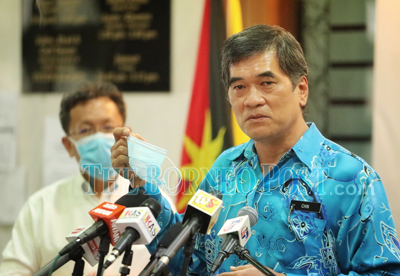 KUCHING: State Health Department (JKN) is aware of complaints that individuals who have been referred and admitted to hospital as well as associated with positive Covid-19 cases were not taken into account as a case reported to the State Disaster Management Committee (SDMC).

In a statement today, its director Dr Chin Zin Hing said that the department had taken note of public complaints and feedback, including a question from Pending assemblywoman Violet Yong on her social media.

He explained that it is one of the precautionary steps taken by the JKN to conduct further investigation on the cases that are still suspected and for the purpose of re-screening tests to be done.

“The purpose of re-screening is to ensure that they are completely free of Covid-19 infection. In fact, the purpose of referring and admitting them to the hospital is to ensure they will not spread the infection to others, especially to their family members who stay in the same house, if they have been confirmed positive.

“While in the hospital ward, these people will also be isolated and not placed together with cases that have already been confirmed positive to prevent infection in the hospital,” he said.

Yong, in her Facebook on Friday, raised the question on why her friend’s nephew who was admitted to the hospital for quarantine was not reflected in the daily Covid-19 report.

“I hope that the number of the reported confirmed Covid-19 cases in Sarawak everyday reflects the true situation,” she had written.

Meanwhile, Dr Chin also explained that active Covid-19 screening on July 26 and 27 resulted in a high number of positive cases being reported on July 28.

“The high number of cases reported on July 28 was because on July 26 and 27 , the department, through Kuching Division Health Office, had done active screening activities on clusters that are still active in Kuching District. As a result, many members of the public had their swab tests taken and a number of them were found positive,” he said.

JKN thanked the people who had cooperated in combating the spread of Covid-19, and advised the public not to be complacent but instead stay vigilant by complying to all health recommendations and practising all the Standard Operating Procedures (SOP).