Tuesday, August 11
You are at:Home»News»Escaped cow has to be slaughtered in eight-foot deep drain during Aidiladha 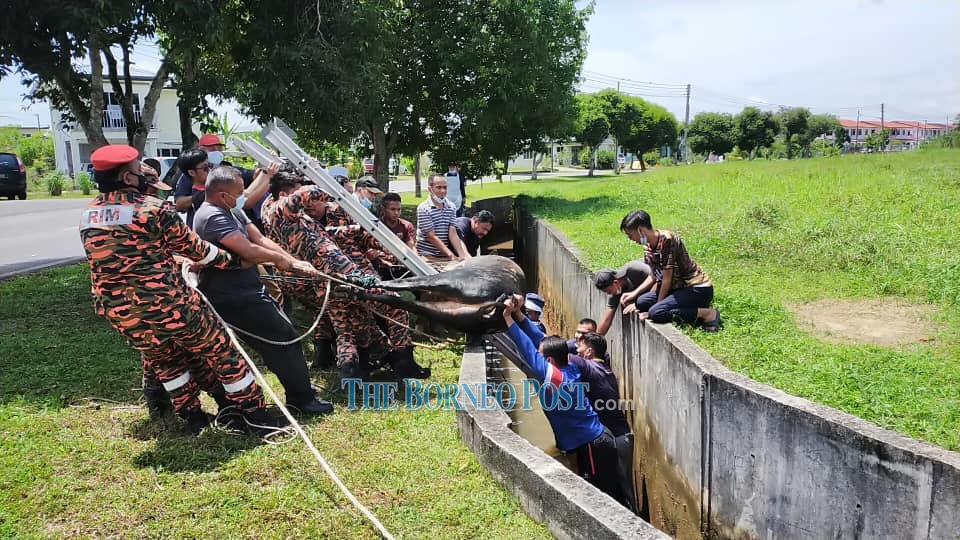 The cow was successfully removed from the drain after it was slaughtered.

SIBU: The slaughtering of a cow for Hari Raya Aidiladha at Surau Darul Jannah, Kampung Dato Baru had to be done in a eight-foot deep drain after four hours of futile efforts to remove the animal.

According to Surau Darul Jannah chairman Ali Supian Daud, 45, the animal escaped from the cage at around 7.30am today and crashed through the surau’s gate before heading into the open area in front of the surau.

Members of the public were also seen chasing after the cow to prevent it from escaping.

“Initially, the villagers succeeded in tying it to a tree. But somehow, it became more aggressive and jumped into the drain opposite the road in front of the surau.

“After several futile attempts by villagers to remove the cow from the drain, we were forced to call in the firemen at around 11am for assistance, but also without success,” he said.

As it was difficult to calm down the cow, the ‘korban’ committee suggested it be slaughtered in the drain concerned.

The cow was slaughtered at around 12.15pm by Imam Surau Darul Jannah Ustaz Fathoni Sukriyo.

“Three people had to go down into the drain to tie the cow’s legs so that the slaughtering process could be carried out, while others held it down with rope.

“This is a really unforgettable experience as it is the first time the sacrificing of a cow was done in a drain,” said Ustaz Fathoni.

Meanwhile, according to Ali Supian, the ‘ibadah korban’ carried out at the surau was done by Kampung Dato Baru ‘Korban’ Committee.

Seven head of cattle were slaughtered this morning, of which one was contributed by Nangka assemblyman Dr Annuar Rapaee.