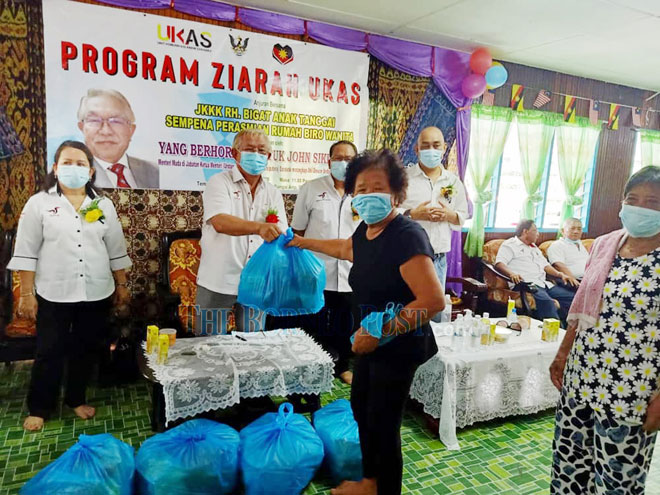 Sikie (second left) hands over a food pack to one of the recipients.

BINTULU: The people of Kakus constituency have been urged to continue strictly adhering to the government’s directives and standard operating procedures (SOPs) to protect themselves from Covid-19 infections, said Assistant Minister of Native Laws and Customs Datuk John Sikie Tayai.

He said though Tatau and Selangau districts under the constituency are both classified as green zones, continuous adherence to SOPs must be practised regardless of whether they are in urban or rural areas.

“Covid-19 is a deadly virus but we can stop it from spreading if the people obey all the safety guidelines and SOPs including the mandatory wearing of  face masks in crowded places effective Aug 1.

“Tatau and Selangau districts are currently green zones but it is the responsibility of all parties to keep their community safe and free from Covid-19,” he said at the ‘Ziarah Ukas’ programme held in conjunction with the launch of Rumah Bigat Tanggai Village Security and Development Committee (JKKK) and Women’s Bureau at Sungai Arip in Selangau on Saturday.

On another issue concerning the Agriculture Facilitation Fund in Kakus, Sikie said the government will be distributing durian saplings from Musang King, Johor Mas and  Black Thorn as well as fertiliser.

The Kakus assemblyman also said the distribution of the assistance will be made once there is a sufficient supply of the durian saplings.

“These durian varieties were selected due to the high price and demand in the market.

“Although the number of saplings given is not much but if the trees are well cared for, it will generate lucrative income during fruiting season,” he added.

He also touched on the need for rural areas to be connected with better telecommunication network in view that the lack of such infrastructure has affected online learning for rural students during Movement Control Order (MCO).

“The government has approved 30 communication towers in Kakus constituency and one of the towers will be build in Ulu Arip and Arip Ili,” he said, adding that an application has also been forwarded to the relevant agency for a road upgrading project in Ulu Arip.

He also urged the longhouse chiefs to update their longhouse profiles with the district office if there is any change to facilitate the smooth distribution of aid from the government particularly food supplies during this Covid-19 period.

Other allocations were also announced for the JKKKs of Rumah Adan, Rumah Sibat, Rumah Jimin and Rumah Melap Ulu Arip.