Monday, February 6
You are at:Home»News»Sabah»Sabah Youth Council to air first online festival
For the freshest news, join The Borneo Post's Telegram Channel and The Borneo Post on Newswav. 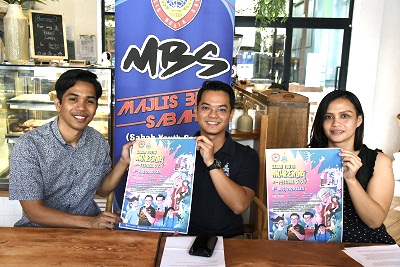 Its president, Ahmad Farid Sainuri, said viewers would be able to watch the festival, which would be launched by former Sabah Youth and Sports Minister Jin Zhe Phoong, through its official MBS Facebook Page from 11.30am to 8.30pm.

The MBS inaugural e-festival is organized in cooperation with the North Borneo Collective (NBC).

“This E-Festival is the first online festival organized by the Sabah Youth Council as a commitment to continue with the Sabah youth development programs despite the Recovery Movement Control Order (PKPP) to curb the Covid-19 pandemic spread.

“MBS is targeting the involvement of at least 50,000 to 100,000 online participants in the Sabah Awakening Youth E-Festival this Saturday,” added Farid in a press conference held at Nook Cafe here yesterday.

Farid said the program was a continuation of MBS’ efforts to assist those who have been affected by the Movement Control Order period.

He said this included the ‘Dapur Belia’ (Youth Kitchen) program, which had benefited more than 30,000 recipients.

“The Sabah Awakening Youth E-Festival is a follow-up program to inspire youths to remain resilient and positive in facing the challenges of today and the future,” he said.

He said there would also be a sharing session from social media influencer Veveonah Mosibin and Duyung Darat to inspire new ideas on digital economic opportunities that Sabah youths could pursue.

Besides that, he said MBS efforts to promote digital economy opportunities would be further strengthened with the presence of first Facebook Gaming partner in Sabah, MicaHoya.TV.

Further information regarding the e-festival can be found on the official Majlis Belia Sabah and Sabah Awakening Youth E-Festival Facebook and Instagram page.