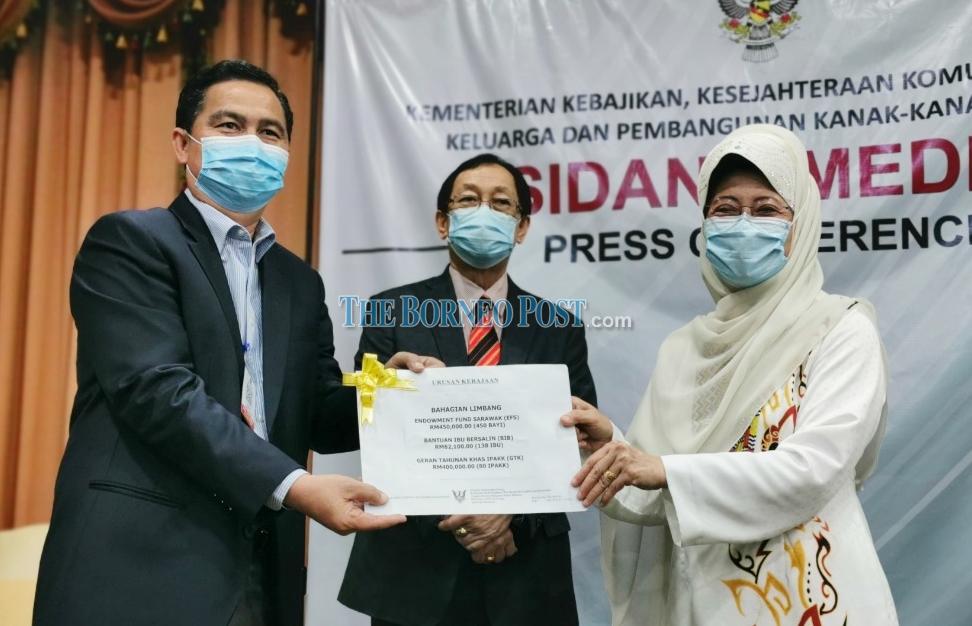 Fatimah (right) hands over an envelope containing the EFS, BIB and Special Annual Grant to a DUN representative, while Francis looks on. Photo by Roystein Emmor

“For the same period this year until July 31, the total registration for EFS throughout the state is 13,538 or 79 per cent of the total number of Sarawak-born children, which is 17,196.

“The number of applications approved or the number of EFS accounts that have been opened by Bank Islam Malaysia Berhad as of July 31 this year is 12,184, involving a total of RM12,184,000,” she said at a press conference at her office today.

According to Fatimah, last year the state government allocated RM40 million for EFS while for this year it is RM30 million.

“This is the second year the state government has introduced EFS, which is to give a RM1,000 one-off to Sarawakian newborns starting January 1, 2019.

“This fund aims to help Sarawakian children when they reach the age of 18 to further their studies or as capital to start their careers,” she explained.

On Maternity Assistance (BIB), Fatimah said since its introduction earlier this year, the ministry has received 6,791 mothers with ‘K’ status or has Sarawak connections as of July 31.

She said of the total, 4,140 or 61 per cent had received their respective payments.

“The state government has channeled RM450 of assistance to each mother who has given birth with the status of ‘K’ (Sarawakians) or has Sarawak connection, or is married to Sarawakian starting Jan 1 this year.

“For that purpose, the state government has allocated RM19 million to help lessen the burden of mothers during confinement as well as provide for the needs of the baby,” she explained.

Previous ArticleWitness says never received receipts from BN or Umno for ‘political donations’ given to Rosmah
Next Article Kenyalang Gold Card does not entitle cardholders to cash claims, Fatimah explains