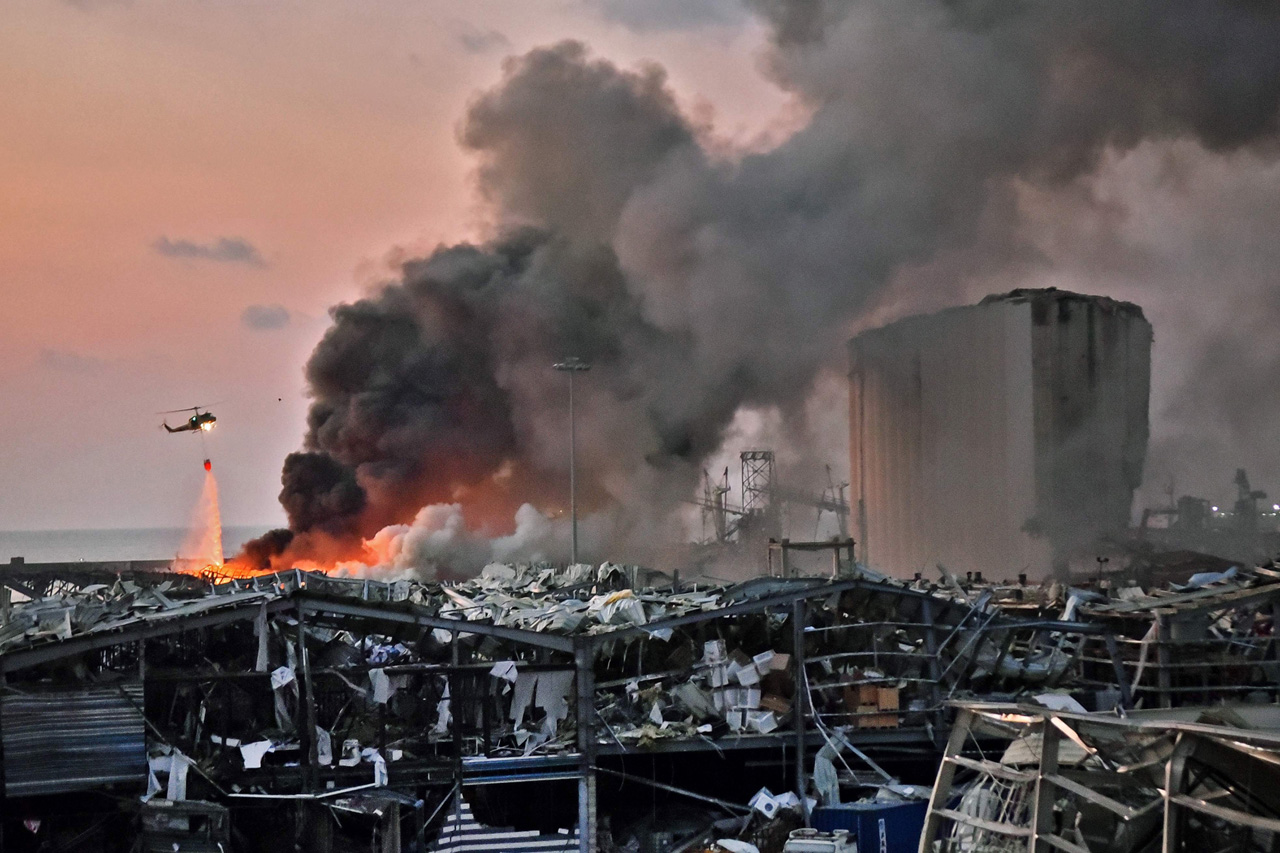 A helicopter puts out a fire at the scene of an explosion at the port of Lebanon’s capital Beirut. — AFP photo

BEIRUT: Rescuers searched for survivors in Beirut yesterday after a cataclysmic explosion at the port sowed devastation across entire neighbourhoods, killing more than 100 people, wounding thousands and plunging Lebanon deeper into crisis.

The blast, which appeared to have been caused by a fire igniting 2,750 tonnes of ammonium nitrate left unsecured in a warehouse, was felt as far away as Cyprus, some 240 kilometres to the northwest.

The governor of Beirut, Marwan Abboud, described the disaster as “an apocalyptic situation” he estimated might have made 300,000 people temporarily homeless and would cost the country in excess of US$3 billion.

The scale of the destruction was such that the Lebanese capital resembled the scene of an earthquake, with thousands of people left homeless and thousands more cramming into overwhelmed hospitals for treatment.

“A massacre. I saw people screaming, covered in blood, homes broken, glass shattered, roads that look like Hiroshima or like a tsunami hit,” Elie Zakaria, a resident of a neighbourhood close to the port, told AFP

In those areas, the amount of destruction caused by the long years of civil war between 1975 and 1990 was achieved in a second by a blast that levelled buildings within a radius of several hundred metres.

A resident of Mar Mikhail, one of the most affected neighbourhoods, said she saw bodies strewn in the middle of the street, apparently thrown off balconies and rooftops by the blast.

Many people were watching and filming with their phones after an earlier and smaller explosion was heard in the port and ignited a fire.

The resulting footage, which was widely shared on social media, shows a ball of fire and smoke rising above Beirut and a white shockwave engulfing everything around it.

The mushroom-shaped explosion – which seismologists said was logged as the equivalent of a 3.3 magnitude quake — and the scope of the damage drew nuclear analogies in many people’s accounts of the tragedy.

“The Apocalypse” read the headline of L’Orient-Le Jour, the main French-language daily in Lebanon, a country that has seen its share of explosions in its recent past, but none quite this big.

The embattled government of Prime Minister Hassan Diab described the circumstances at the port that led to the explosion as “unacceptable” and vowed to investigate.

“Those responsible for this catastrophe will pay the price,” he said.

Messages of support poured in from around the world for Lebanon, whose economy was already on its knees after it defaulted on sovereign debt earlier this year.

A crippling devaluation has sent poverty levels soaring to an estimated 50 percent of the population and for a country so heavily reliant on imports, the obliteration of the main port signalled more hardship ahead.

Criticism of the government was already rife on social media, where Lebanese users argued that a disaster of such magnitude could only strike in a state whose institutions are crippled by incompetence and corruption.

Late Tuesday, thousands of families drove out of Beirut to take their families to safety, but many others were left stranded without a roof, unable to go anywhere or unwilling to leave their gutted homes open to looters.

The rescue effort was slowed at night by the lack of electricity, which was already intermittent at best in much of the city before the explosion.

The security forces sealed off a huge area around the blast site, searching for bodies and survivors under the rubble of levelled buildings while rescue boats scoured the waters off the coast.

Hospitals that had already been stretched to the brink by a spike in the number of coronavirus cases in recent days were pushed to new limits by the influx of wounded and forced to turn many away.

Saint-Georges hospital was badly damaged by the explosion and lost several members of its staff.

“We’ve had some dark days in Lebanon over the years but this is something else,” said Rami Rifai, a 38-year-old engineer, speaking to AFP from a hospital where his two daughters were receiving treatment after sustaining cuts despite being half a kilometre from the seat of the blast.

“We already had the economic crisis, a government of thieves and coronavirus. I didn’t think it could get worse but now I don’t know if this country can get up again. Everyone is going to try to leave. I will try to leave,” he said, his voice choked by tears.

The Red Cross said on Wednesday morning that more than 100 deaths had been confirmed. It also reported around 4,000 injured, prompting fears that the death toll could rise significantly.

In a country where smallholders have been unable to withdraw even limited amounts of cash from banks since the start of the year, there was little hope of compensation for those whose property was destroyed.

Crippled by debt and political paralysis, Lebanon, which was due to celebrate its centenary next month, looked ill-equipped to tackle the new crisis.

Grassroots solidarity was still alive however, with initiatives swiftly set up on social media to help people locate missing loved ones or assist victims with free accommodation. – AFP