Tuesday, October 20
You are at:Home»News»RM1,000 fine for violating SOPs can be reduced by Health Ministry – Miri OCPD 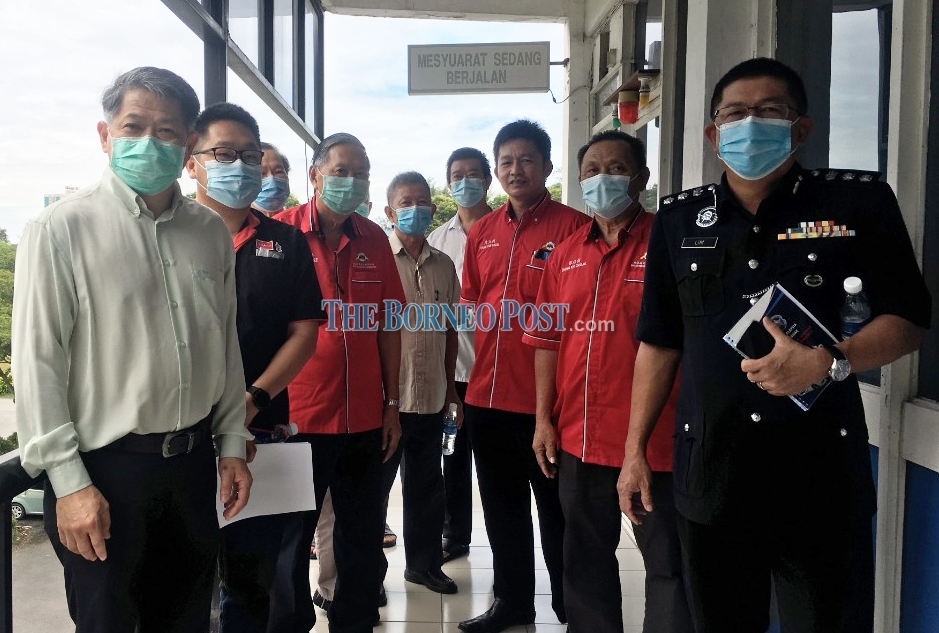 Lim (right) and Dr Ting (left) with members of the two associations pose for a photo after the dialogue held at IPD Miri today.

“The police have also provided information that the compound can be reduced by the health offices.

“The compound of RM1,000 does not mean that the offenders must pay RM1,000. They have the opportunity to appeal to the health offices and the courts if they want the compound to be reduced.

“The value of RM1,000 is only set as a maximum,” he told reporters after the dialogue session held at Miri district police headquarters today.

Lim had earlier held a dialogue with the members of the Miri United Hawkers Association as well as Miri Coffee Shop and Restaurant Owners Association.

Also present at the dialogue were members of DAP Miri branch led by its chairman Dr Ting Tiong Choon.

Lim said the meeting was aimed at explaining the SOP for businesses to provide a deeper understanding to the leaders of the associations so that the knowledge can be passed on to their members.

On another note, Lim also advised the public to not to be intimidated or upset about the uniforms and firearms used by the armed forces personnel when they are on duty throughout the RMCO period.

“The armed forces personnel have been on duty for more than four months since the start of the Movement Control Order. There were complaints from the community that they are bringing fear to the people by carrying weapons.

“In my personal view they must carry firearms when carrying out their duties. That is already their rule while on duty,” Lim explained.

Hence, he advised the public to always cooperate with the authorities and always comply with all of the SOPs that have been set.

Meanwhile, Dr Ting said they were very fortunate to have the chance to meet Lim and his officers because the members of the two associations have been very concerned about the implementation of the SOPs.

“A lot of community and the public have been fined for not following the SOP. So, when I asked, most of them were very confused about what needs to be done and a lot of them felt that the enforcers have been overzealous in penalising them for minor mistakes,” he said.

Dr Ting said the dialogue session had enabled them to bring up several issues including the SOP for businesses.

“We have asked the police to be a little bit more towards educating the public rather than implementing strict enforcement,” he added.