Tuesday, October 20
You are at:Home»News»Emergency aid lands in Lebanon 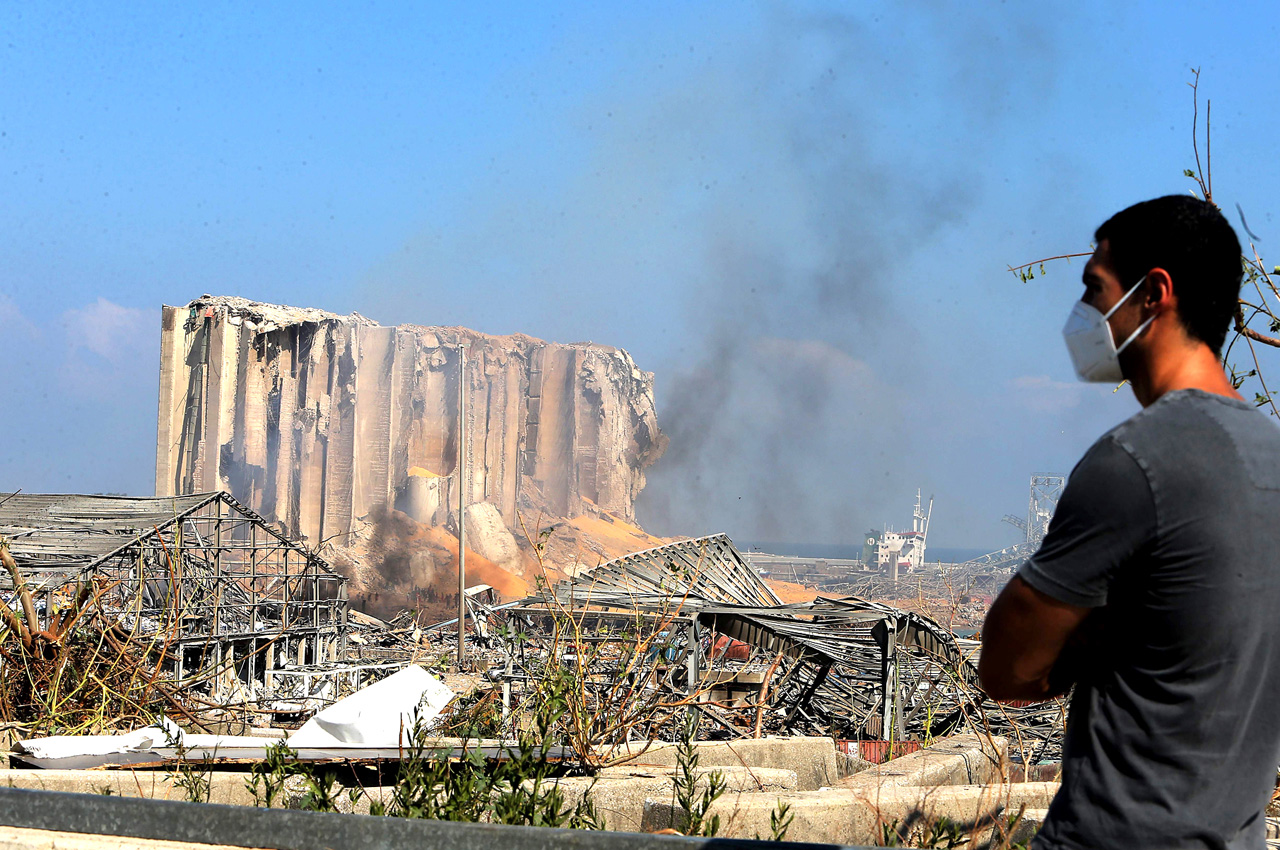 A man wearing a protective mask against the coronavirus stands across the road from the damaged grain silos of Beirut’s harbour. — AFP photos

The blast centred on the city’s port caused massive destruction and killed at least 113 people, heaping misery on a country in crisis.

Gulf states were among the first to respond, with Qatar sending mobile hospitals to ease pressure on Lebanon’s medical system, strained by the coronavirus pandemic.

A Qatari air force plane delivered hundreds of collapsible beds, generators and burn sheets in the first of a convoy of flights to Beirut.

Kuwait also sent medical supplies as the Lebanese Red Cross said more than 4,000 people were being treated for injuries after the explosion, which
sent glass shards and debris flying.

A Greek C-130 army transport plane bearing a dozen rescuers landed at Beirut’s airport, itself damaged in the catastrophic blast.

Algeria said it would send four planes and a ship with humanitarian aid, medical teams, firefighters, supplies and construction materials.

Lebanon’s Prime Minister Hassan Diab has called on ‘friendly countries’ to support a nation reeling from its worst economic crisis in decades as well as a coronavirus outbreak that has infected over 5,000 people and killed 68.

As emergency crews hauled survivors from the rubble of demolished buildings, France said it was sending search and rescue experts aboard three military planes loaded with a mobile clinic and tonnes of medical and sanitary supplies.

President Emmanuel Macron has travelled to Lebanon yesterday, the first world leader to do so after the disaster, as France seeks to swiftly push reconstruction in its former colony.

“France is at the side of Lebanon. Always,” Macron tweeted in Arabic.

Prosecutors in France also opened an investigation into the blast, which wounded 21 French citizens.

Britain’s Queen Elizabeth II sent a message to the president of Lebanon, saying she was ‘deeply saddened’ by the blast.

US Secretary of State Mike Pompeo, in a phone call with Diab, offered Washington’s assistance and stressed “our solidarity with and support for the Lebanese people as they strive for the dignity, prosperity and security they deserve.”

Cyprus, parts of which felt the blast roughly 240 kilometres, said it was sending eight police tracking dogs and their handlers aboard two helicopters.

From Europe, authorities in the Netherlands, Czech Republic and Poland offered an array of assistance including doctors, police and firefighters, together with rescue experts and sniffer dogs.

The World Health Organisation said it was sending trauma and surgical kits from its Dubai base after the ‘shocking event’ that comes at a ‘particularly difficult time in Lebanon’.

“Many hospitals are overwhelmed with casualties and people are still looking for the injured and the dead, so it’s a very sad day,” said the UN agency’s emergencies director Michael Ryan.

In a statement, the World Bank Group said it “stands ready to deploy its expertise to undertake a rapid damage and needs assessment and to develop a reconstruction plan as per international standards.” — AFP