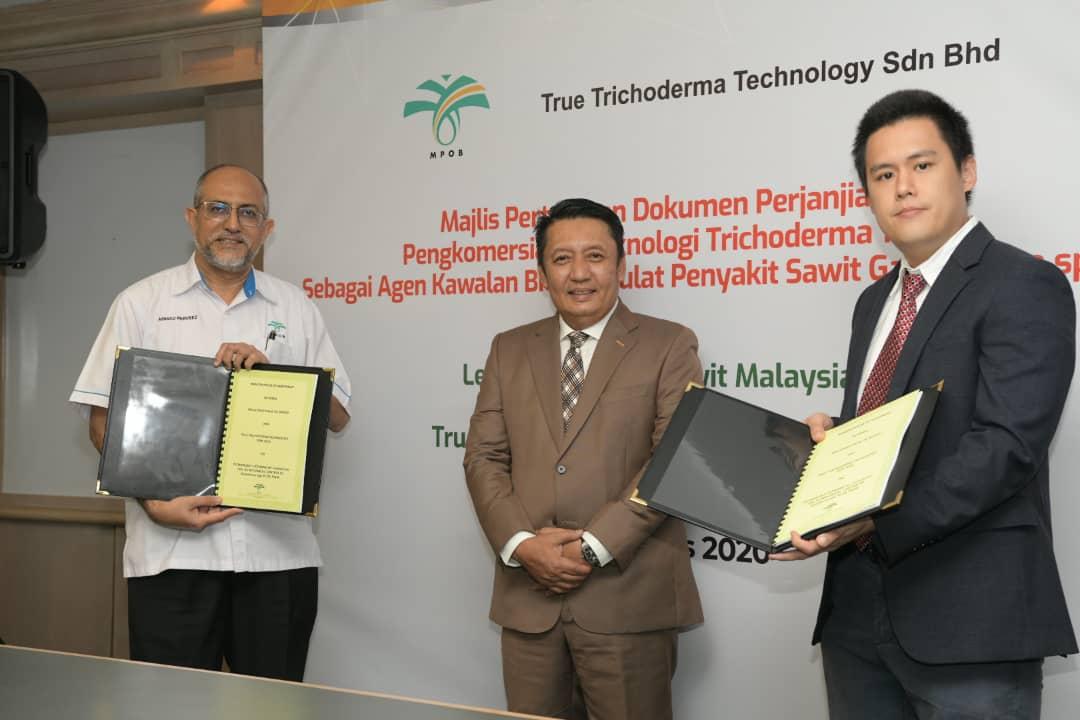 Chairman of MPOB Datuk Ahmad Jazlan Yaakub said True Trichoderma Technology has collaborated with MPOB in the research for the technology beginning June 2018.

“We are witnessing the commencement of the commercialisation of MPOB technology, a biological control agent technology using Trichoderma which is an effective method for the palm oil industry,” he said at the Memorandum of Agreement Exchange Ceremony between MPOB and True Trichoderma Technology on Wednesday.

The technology developed by MPOB for Ganoderma control can be used through integrated land and crop preparation that includes environmentally friendly approaches that benefit oil palm growers including smallholders.

The Trichoderma formulation is able to help prolong the productive life of the palm tree, which in turn contributes to a significant reduction in income loss due to the Ganoderma fungus which is the cause of the palm basal stem rot disease.

“With the effectiveness of this technology as a biological control method for the oil palm industry, it is recommended as one of the integrated disease management methods. The commercial potential of this product is huge because it is one of the main diseases of oil palm trees,” said Dr Ahmad Parveez.

Dr Ahmad Parveez said the study started 10 years ago with the isolation of the endophytic Trichoderma fungus from the roots of palm trees and its effectiveness was tested in the laboratory using in vitro testing. Endophytic fungi are fungi that can live intercellularly in the palm tree system, as one of the advantages of biological control of Ganoderma.

Studies in nurseries and fields using oil palm seedlings that have been treated with the fungus Trichoderma 159c are able to provide protection against basal stem rot disease and in turn reduce the effects of disease on palm trees.

Biological control agent technology using Trichoderma is an effective method for the palm oil industry. This preventive approach is recommended to be incorporated into integrated disease management.