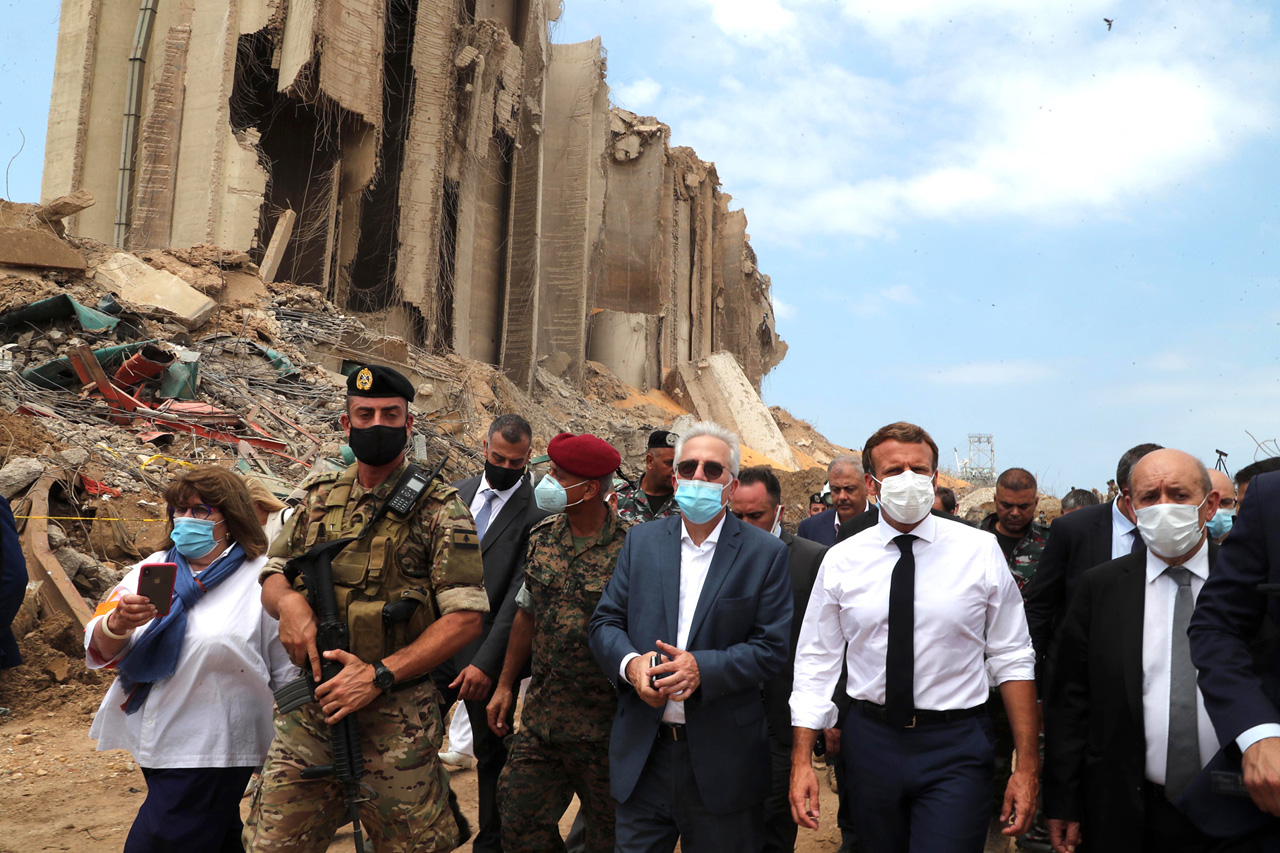 BEIRUT: Rescuers combed through the rubble of Beirut port yesterday in a search for survivors watched breathlessly by relatives of the missing, after an investigation into the huge blast made its first arrests.

Shock has turned to anger in Lebanon since Tuesday’s colossal explosion killed at least 153 people and devastated swathes of the capital, with security forces firing tear gas at demonstrators who gathered near parliament late Thursday.

The revelation that a huge shipment of hazardous ammonium nitrate fertiliser had languished for years in a warehouse in the heart of the capital served as shocking proof to many Lebanese of the rot at the core of their political system.

What ignited the 2,750 tonnes of fertiliser is still unclear — officials have said work had recently begun on repairs to the warehouse, while fireworks were stored nearby.

Near the seat of the explosion, next to the carcass of the port’s giant grain silos, rescue teams from France, Germany and Italy coordinated their search efforts.

“I am waiting to hear that you have been rescued alive, my dear,” tweeted Emilie Hasrouty, whose brother is among the missing.

“There wasn’t a door I didn’t knock on to know what happened to you, and now that the waiting is almost over, I am paralysed with fear.”

Beirut has received a stream of international assistance since the blast, and on Thursday hosted French President Emmanuel Macron, who pressed Lebanese leaders for deep reform ahead of an aid conference planned in the coming days.

World leaders have joined the chorus of voices in Lebanon and the diaspora demanding an international inquiry into the cause of the devastation.

The UN children’s agency Unicef has said nearly 80,000 children are among the 300,000 people left homeless, including many who have been separated from their families.

Near the disembowelled silos at Beirut port, Russian rescuers were ankle-deep in corn, as excavators removed mangled shipping containers.

Civil defence teams anxiously watched a sniffer dog as he paced around a gap under a fallen crane.

An eerie sense of calm filled the once-bustling port, reduced to an enormous scrapyard.

The only sounds are those of heavy machinery cutting through forests of twisted iron rods and mountains of concrete rubble to clear a path for the rescuers.

French rescuers said they had recovered four bodies, but had found nobody alive so far.

Relatives of the missing have been flocking to the port for days hoping to know the fate of their loved ones.

Lebanon’s hospitals, already strained by a wave of coronavirus cases and a severe economic crisis, have been unable to cope with the number of casualties and the authorities have pressed international donors to send field hospitals and medical supplies.

Relief flights from Iran, Saudi Arabia and the United Arab Emirates were set to land in Lebanon Friday, following others from France, Kuwait, Qatar and Russia.

Two days after the blast, Lebanese were flocking to a Russian field hospital newly established in the capital’s largest sport stadium.

Medics were still erected nearly 20 medical tents when the first wave of patients started to arrive.

They included a 93-year-old man suffering back and chest pains after Tuesday’s blast and a Syrian three-year-old whose scalp was scarred by a shard of glass.

With destruction from the blast extending over half of the capital and the damage expected to cost more than US$3 billion, world leaders have backed calls from ordinary Lebanese for those responsible to be held accountable.

In his snap visit on Thursday, Macron stressed the need for an international investigation after meeting Lebanese politicians, including representatives of the powerful Shiite Hezbollah movement, whose leader Hasan Nasrallah was scheduled to speak later Friday.

Lebanese authorities had announced their own inquiry into Tuesday’s explosion and a military prosecutor on Thursday said 16 people had been detained.

The central bank also ordered an asset freeze for seven port and customs officials, an official and a banking source told AFP.

The measures did not dampen the anger in Beirut’s streets, where dozens of demonstrators scuffled with security forces late Thursday drawing a volley of tear gas.

Lebanon’s leadership was already deeply unpopular, with a wave of mass protests that erupted in October last year only abating in the face of the coronavirus pandemic. — AFP