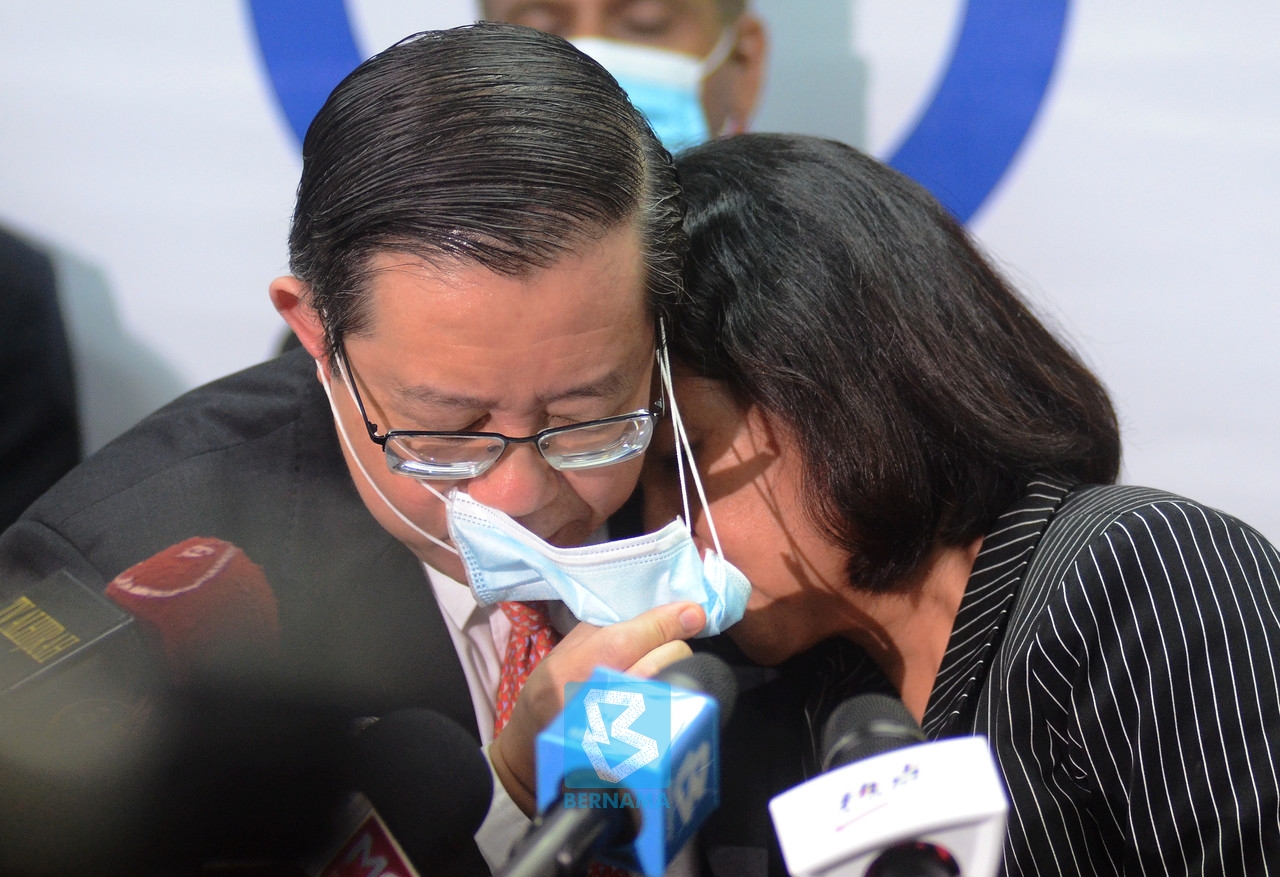 Lim (left) and Chew both pleaded not guilty to the charges. Bernama Photo

Lim, 60, Chew, 56, and  Phang, 48, all pleaded not guilty to the charges made against them which were read out before judge Ahmad Azhari Abdul Hamid, who then allowed them bail of RM50,000 in one surety each and set Oct 16 for mention.

The former Finance Minister drew the public’s attention when he appeared in court today to face the graft charge, having appeared in the same court yesterday and charged with using his position for gratification.

In today’s case, Lim was charged, in his capacity as the Chief Minister of Penang and chairman of the Penang Development Corporation (PDC) Procurement Board then, with using his position for gratification, involving RM372,009 for his wife through a company,  Excel Property Management & Consultancy Sdn Bhd.

It was to ensure Magnificent Emblem Sdn  Bhd was offered an invitation to propose a workers’ village at Lot 631, Mukim 13, Juru, Seberang Perai Tengah and part of  Lot 282, Mukim 13, Batu Kawan, Seberang Perai Selatan, Penang, worth RM11,610,000, where Chew indirectly had interest.

The Bagan Member of Parliament was charged with committing the offence between Aug 19, 2013 and March 3, 2016, at the office of the Penang Chief Minister, Level 28, KOMTAR, in George Town, Penang.

The charge was framed under Section  23(1) of the Malaysian Anti-Corruption Commission (MACC) Act 2009, which provides an imprisonment for up to 20 years and fine of not less than five times the sum or value of the gratification, or RM10,000, whichever is higher, if found guilty.

Phang was charged with abetting Lim in committing the offence at the same place and date.

Meanwhile, Chew pleaded not guilty to three counts of money laundering by receiving RM372,009 from a company through her bank account.

On all three charges, Chew was alleged to have received  RM87,009, RM180,000 and RM105,000, respectively, which were proceeds from unlawful activities from Excel Property Management & Consultancy Sdn Bhd , and deposited into her Public Bank Berhad account.

The charges were made under Section 4(1)(a) of the Anti-Money Laundering and Anti-Terrorism Financing Act 2002, which provides a maximum fine of RM5 million, or imprisonment for up to five years, or both, if found guilty.

The prosecution, led by deputy public prosecutor from the Malaysian Anti-Corruption Commission, Ahmad Akram Gharib, offered bail of RM100,000 in one surety for each of them, and also for Phang and Chew to surrender their passports to the court.

Lawyer Datuk V.Sithambaram, representing  Phang informed the court that the charge against his client was a double jeopardy.

He said the charge against his client today was not a new one, According to him, the charge against Phang today is not a charge of a new case, but an old case for which she had been charged as it involved the same facts, namely the proposed workers’ village of workers and the same land in Taman Manggis.

Citing Article 72 of the Federal Constitution, he said, no person could be charged again for a charge that the accused had been acquitted and discharged.

“We will file an objection on this matter,” he added.

Deputy Roslan Mat Nor then informed the court that the facts of the charge against Phang this time was not the same as before.

Prior to this, Phang had been charged with abetting Lim in connection with the purchase of a land lot and bungalow at below the market value.

However, on Sept 3, 2018, the Penang High Court acquitted and discharged her of the charge.

Ahmad Akram then argued that in the previous case, Phang was given an acquittal and discharge after the prosecution applied not to proceed with the case under Section 254 (3) of the Criminal Procedure Code and the court at that time had used the power under that section to acquit and discharge her.

“But what is certain, at that time, the facts of the prosecution case and the merits of the case were not heard in full yet, so the principle under Article 72 of the Federal Constitution does not apply,” he said, adding that Article 72 of the Federal Constitution 72 is applicable when the court has heard case in full, whereby for the bungalow case, it was was only heard half way.

Yesterday, Lim pleaded not guilty to a charge with using his position as the Penang Chief Minister then for gratification amounting RM3.3 million for himself as an inducement for helping a company to secure the Penang undersea tunnel project, valued at RM6.3 billion. – Bernama