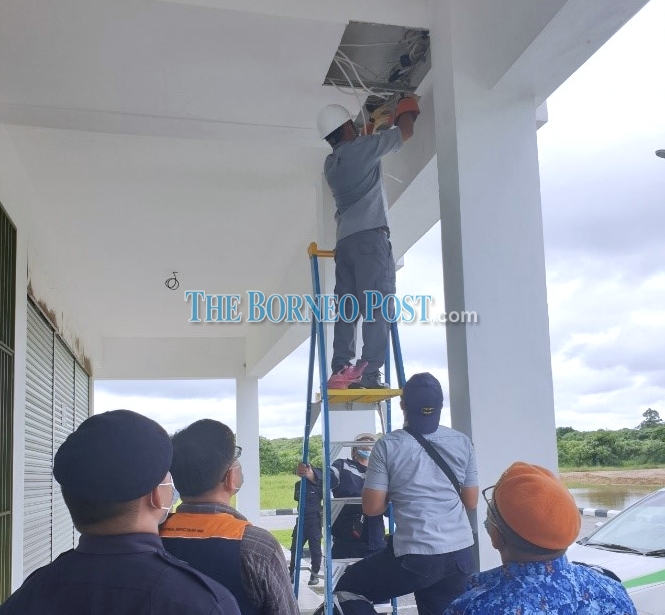 KUCHING (Aug 12): Five cryptocurrency mining operators in Sibu were caught stealing electricity during a joint operation between Sarawak Energy Berhad (SEB), the Electrical Inspectorate Unit (EIU) from the state’s Ministry of Utilities and the police recently.

According to a statement from SEB today, the illegal activity was uncovered at mining centres situated in four different shophouses at Jalan Tun Ahmad Zaidi Adruce, Jalan Pahlawan and Jalan Tunku Abdul Rahman over the course of the two-day operation.

“At all premises, the team found unsafe direct tapping cables from the main incoming supply hidden in the gypsum ceiling that were connected straight to the electrical appliances, bypassing the meter and avoiding actual electricity consumption measurements.

“Checks revealed that the monthly bills for all five shophouses amounted to about RM800 to RM1,000 despite having mining servers operating 24/7. Actual load readings taken on site showed that all five premises were consuming at least RM250,000 worth of electricity per month,” it said.

The statement informed that the team entered the premises with search warrants from the court as efforts to contact the premise owners were unsuccessful.

Five police reports were lodged and all unsafe connections were removed and seized as evidence. The premise owners will also be called in to assist with the investigation.

EIU together with Sarawak Energy have investigated about 50 electricity theft cases relating to cryptocurrenty mining operators in the the state since 2018.

These cases are now pending prosecution by the Sarawak State Attorney-General’s Chambers.

SEB is mandated to recover the loss of revenue resulting from this illegal activity and will actively carry out meter inspection throughout the state working together with the Ministry of Utilities and the police to curb this dangerous crime.

Stealing electricity is a criminal offence under Section 33 (5) of the Sarawak Electricity Ordinance, which carries a penalty of up to RM100,000 and/or five years’ imprisonment.

Illegal connection is not only prohibited, but it also poses dangers such as electrocution, fire and damages to the electrical appliances, SEB said.

Customers are reminded not to trust any service providers claiming to be able to reduce electricity bills or allow premises owners to enjoy unlimited usage of electricity. Landlords are advised to ensure that their tenants do not tamper with their electricity meter to avoid unnecessary prosecution upon themselves.

The public is encouraged to report any suspicious activity to Sarawak Energy’s customer care centre at 1300-88-3111 or email customercare@sarawakenergy.com. All information obtained will be kept strictly confidential.