Monday, September 21
You are at:Home»News»Court»Indonesian woman sentenced to hang for drug possession escapes the gallows 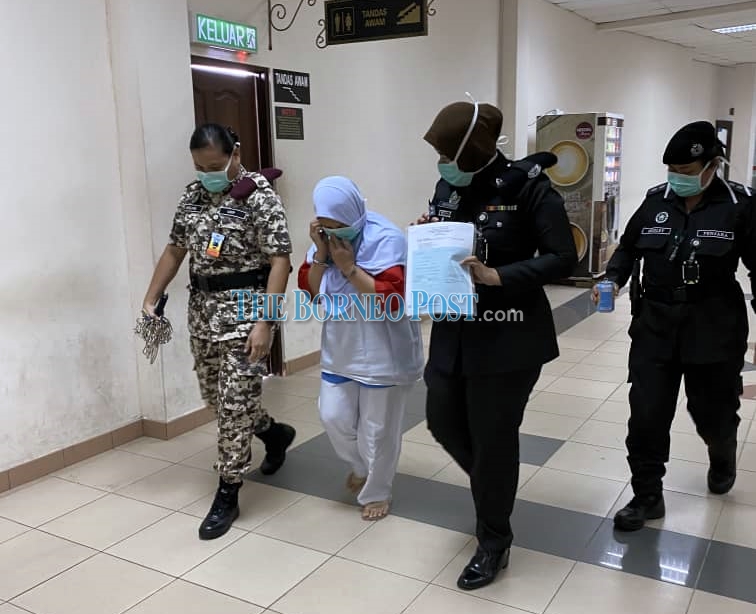 Eva is escorted by prison officers at the Kuching Courthouse.

KUCHING (Aug 12): An Indonesian woman who was sentenced to death by hanging for possessing drugs had her initial sentence replaced with 19 years in prison after the Federal Court here accepted her appeal today.

A panel of judges chaired by Judge Datuk Rohana Yusuf along with Datuk Mohd Zawawi Salleh and Datuk Abdul Rahman Sebli set aside the death sentence imposed on the appellant Eva Syliviana, 53, for syabu trafficking in 2014.

“After examining the submissions of the prosecution and the appellant, the court unanimously sentenced the appellant to 19 years’ jail.

“The sentence runs from the date the appellant was arrested on November 5, 2014,” said Rohana in a conference which was conducted online.

The appellant, who hails from Jakarta, was sentenced to hang to death by Kuching High Court Judge Datuk Rhodzariah Bujang on Oct 11, 2016 after she was found guilty under Section 39B(1)(a) of the Dangerous Drugs Act 1952.

Through her lawyer Ranbir Singh, she wrote to the Attorney General’s Chambers (AGC) to amend the appellant’s charge to Section 39A(2) of the Dangerous Drugs Act 1952.

The appellant was charged again today based on the amended charges and she pleaded guilty after the charged were read out to her by a court interpreter.

Based on the amended charge, the single mother of six was charged with possessing syabu weighing 4,874 grams on Nov 5, 2014 at the Special Examination Unit Office of the Kuching International Airport at 11.30pm.

Authorities found the drugs in the luggage of the appellant who boarded a flight from Hong Kong and was  transitting in Kuala Lumpur before arriving here.