Tuesday, October 20
You are at:Home»News»Projects that benefit people will not be arbitrarily scrapped, says Fadillah’s pol sec 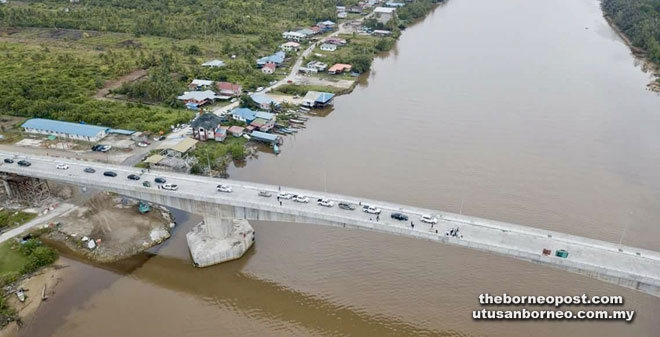 KUCHING: The current government will not simply scrap projects that are meant for the people or force the termination of contracts by using threats, said Hamzah Brahim, the political secretary to Works Minister Datuk Seri Fadillah Yusof.

“Therefore, we respect the decision of the previous government and decided to continue with the Sabah-Sarawak Link Road (SSLR) project, and we will continue to fight for the projects that were cancelled by the Pakatan Harapan (PH) government, including the three bridges,” he said.

Hamzah said this in a statement today after former political secretary to Baru Bian, Zehegkiel Piree said the federal government’s move to carry on with the SSLR had vindicated Baru’s decision to scrap the Rambungan, Igan and Batang Lupar bridges in Sarawak when he was the works minister.

Zehegkiel said the RM900 million bridge projects were under the state Public Works Department of Sarawak and not the federal government.

Hamzah said the previous Barisan Nasional government had approved RM1 billion, half of which is from the state government, for the Batang Lupar bridge; RM500 million for Igan bridge and RM100 million for Rambungan bridge.

“The allocation meant for the three bridges were diverted to the SSLR, forcing the Sarawak government to take over the projects completely for the people,” he said.

In this respect, Hamzah thanked Chief Minister Datuk Patinggi Abang Johari Tun Openg for putting the people first and deciding to take over the implementation of the three bridges.

He said the bridges would not only benefit the people living along the coastal areas but also those living in other towns and cities in Sarawak as they provide the needed connectivity.

He also pointed out that Baru had cancelled the second phase of the Pan Borneo Highway project from Limbang to Lawas, and the state government too decided to shoulder the cost of the project and to continue with its implementation for the good of the people in the two districts, which happen to also be where Baru’s constituency Ba’kelalan is located.

“The government’s priority today is to ensure that all projects that have been approved can be implemented in the people’s interests instead of being politicising them,” said Hamzah.