Monday, February 6
You are at:Home»News»Over 21,000 smallholders in Sarawak yet to achieve MSPO certification – KPKK
For the freshest news, join The Borneo Post's Telegram Channel and The Borneo Post on Newswav. 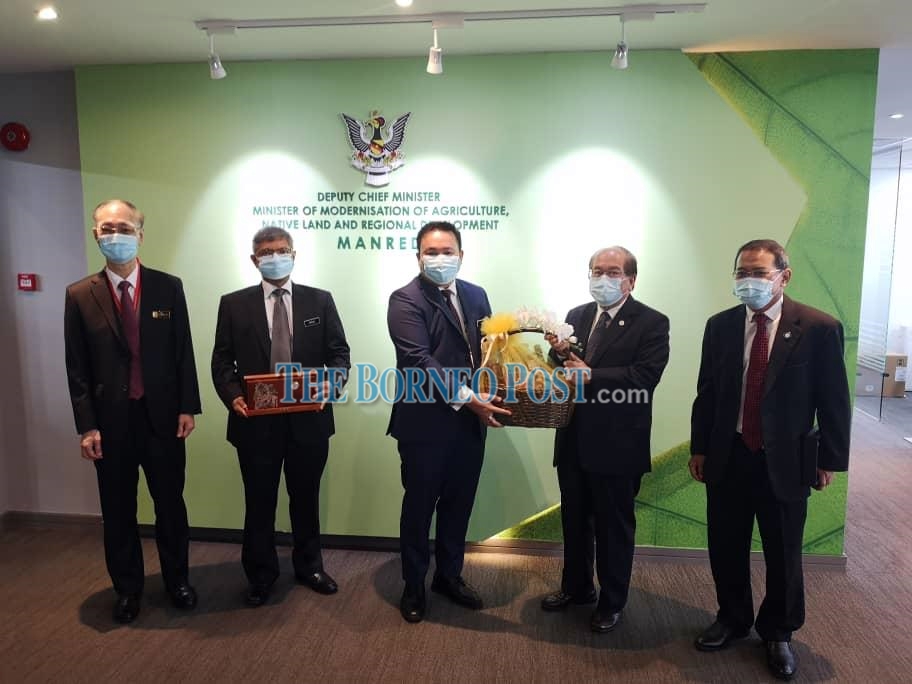 Uggah (second right) presenting a memento to Willie during the courtesy call. Also seen is permanent secretary to the Ministry of Agriculture, Native Land and Regional Development Edwin Abit (right).

KUCHING (Aug 24): Only 17,785 out of 39,391 oil palm smallholders in the state have received the Malaysian Sustainable Palm Oil (MSPO) certification as of July 31 this year, said Ministry of Plantations and Commodities (KPKK).

“The Malaysian Palm Oil Board (MPOB) has found that the percentage of MSPO certification among smallholders is still low. Among them are the Q8 cluster (Pantu, Bukit Begunan, Lingga, Simanggang), Q22 (Marudi) and Q30 (Sebauh).

“To further strengthen the MSPO certification, the mandatory MSPO warning letter will be distributed to smallholder licensees who have yet to register as the certification will be made mandatory starting Jan 1, 2021,” the ministry said.

For the purpose of MSPO Standards Review currently being implemented, the ministry said smallholders are advised to refrain from planting the palm oil trees at the river buffer zone (Riparian Zone) at a gradient exceeding 25 degrees.

This was because it was in contrary to the High Conservation Values (HCV), which will be included in the MSPO certification standards.

“In this regard, to avoid the withdrawal of MSPO certification among Sarawakian smallholders, they will be given a warning about this requirement,” the ministry said.

Meanwhile, the ministry announced the implementation of B20 Biodiesel programme for transport sector will be implemented in the state on Sept 1, this year.

The implementation of the programme will increase the usage of crude palm oil (CPO) from 534,000 tonnes to 1.06 million tonnes a year, the ministry said.

The ministry also said the Malaysian Rubber Board (MRB) will improve and expand the Rubber Production Incentives (IPG) claim methods, especially for smallholders living in rural areas due to lack of communication infrastructure.

“KPPK through the Malaysian Pepper Board (LLM) will also welcome companies who are interested in venturing into pepper cultivation in order to move the pepper industry to be more competitive. This is because the area of ​​pepper cultivation in 2019 was at 7,132 hectares, with a total production of 33,164 tonnes cultivated by local smallholders,” it said.

The ministry said they were pleased to be able to work closely with the Sarawak government to resolve issues that arise to ensure the survival of the agricultural sector in Sarawak such as oil palm, rubber, timber, cocoa, pepper, sago and kenaf.

Among the issues discussed were the MSPO certification, implementation of the Biodiesel B20 programme for transport sector, rubber production incentive and pepper cultivation potential.