Saturday, October 1
You are at:Home»News»State government to revive Rimbunan Kaseh project in Lawas shelved by PH 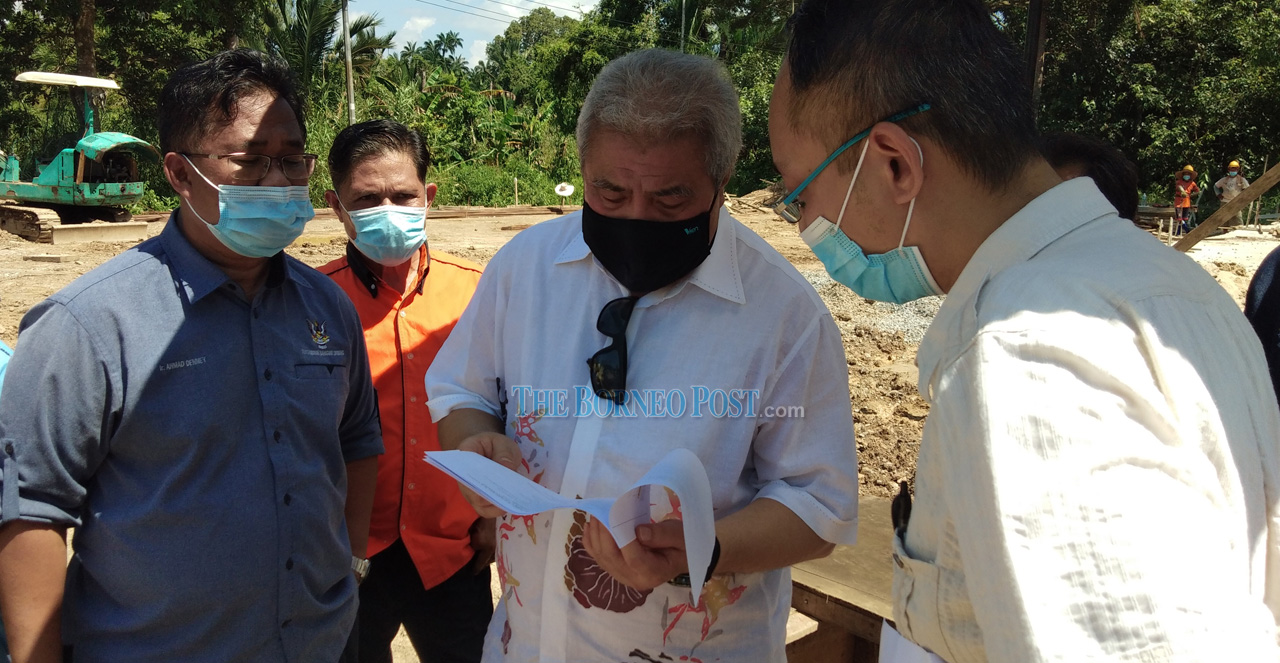 Awang Tengah (third left) seen during the inspection on the site of Surau Tanjong Katong Sundar.

MIRI: The Sarawak government will revive the community economic uplifting programme under Rimbunan Kaseh (RK) project in Lawas after it was discontinued by the previous Pakatan Harapan (PH)-led federal government.

Deputy Chief Minister Datuk Amar Awang Tengah Ali Hasan said this would be undertaken by Land Custody and Development Authority (LCDA) to enable participants get back on track after their livelihood was disrupted.

He disclosed this after officiating at the Agriculture Community Outreach Programme (AgriCop) in Kampung Tanjong Katong in Sundar yesterday.

This pilot project produced its first harvest of golden melons in 2016 as a model of rural economic transformation to eradicate poverty, where participants were each paid monthly salary of RM1,000 in the first six months and RM1,500 in the subsequent months.

The Deputy Chief Minister said this programme held high potential in commercial farming and the state government was focusing on the production of rock melons, gold melons and good quality fish fry under the revival plan.

“It will be managed by the private sector. This revival is expected to cost RM3 million and generate incomes for the participants,” he said.

The private sector’s involvement would cover the management and marketing aspects, while the participants from the local community would be involved in production at RK Sundar.

Awang Tengah, who is Minister of Minister of International Trade and Industry, Industrial Terminal and Entrepreneur Development, said the Sarawak government had always been sensitive to the needs and welfare of the people, as reflected in its policies and allocation of funds.

“The state government has to step in to revive many of the projects that were shelved by PH while they took helm of the federal government,” he
said.

According to Awang Tengah, efforts are being made to add another revenue stream to buffalo farmers in Lawas – namely, the utilisation of milk to produce high-quality buffalo cheese.

He said a lactating buffalo could produce three to four litres of milk, and this could translate into an income of at least RM400.

In this respect, Assistant Minister of Agriculture Native Land and Regional Development Datuk Dr Abdul Rahman Ismail said a renowned cheese entrepreneur from Peninsular Malaysia had met him to express interest in developing this industry in Lawas.

Meanwhile, he urged crop, livestock and fisheries farmers in Lawas to look beyond the domestic market in marketing their products as the advancement of technology had enabled them to improve production and promotion.

“They should also equip themselves with sufficient knowledge and skills, including learning Arabic or Chinese language to penetrate international markets, where these languages are the lingua franca.

“The government has facilitated entrepreneurship for them by providing easy access to
skills-development, funding and aid for farm input such as those provided under AgroCop,” he said.

Some 150 participants from 12 villages in Sundar are included in the AgroCop programme under the Agriculture Department, where RM8.2 million has been allocated for agriculture development in Lawas District this year – half of this amount is slated for the Sundar Sub-District to enhance productivity of the farmers there.