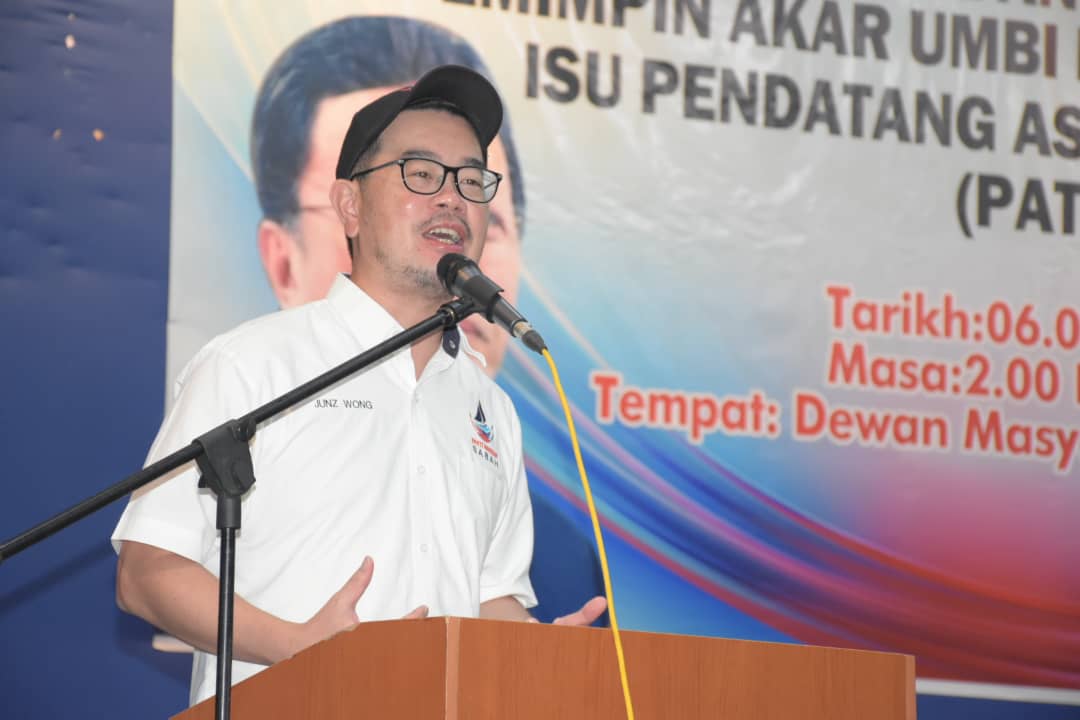 Junz speaking at the dialogue.

“Not many are aware of this gazetted ‘PTI village’, so let us ask Musa and his allies, STAR, PBS and LDP for an explanation.

“But I can tell you according to the Land and Survey Department records, the gazette happened in January 2006.

“The size of the settlement is 4.64 acres. You can search for these information on the JTUWMA.”
JTUWMA is an online portal to search for land title details.

“Sungai Mowtas is maybe the one and only ‘PTI village’ gazetted in the entire Sabah.”

“Thanks to Musa Aman, the PTIs now think Sabah welcomes them.”

Junz added that in view of the anti-PTI platform STAR, PBS and LDP are campaigning under, they must explain themselves.

“Since STAR is so vocal about PTI, and their supporters have even insulted Warisan as PTI party, they must now explain why they support Musa who gazetted Sungai Mowtas, Sabah’s first and perhaps one and only ‘PTI village’ in existence.

“In the last election, STAR campaigned under the anti-Musa platform, only to support Musa in the end. And now STAR is clearly siding with Musa.”

As for PBS and LDP, Junz said no matter how they try to rebrand and reinvent themselves, Sabahans will not be taken for a ride.

“PBS and LDP meanwhile, can try to rebrand and reinvent themselves, but Sabahans are no fools.”

“This is the internet era. Information is just a click away. PBS and LDP’s track record as Musa’s supporters all Sabahans are aware of.

“Both were part of Musa’s Cabinet when the gazette happened in 2006. They had Deputy Chief Ministers and Ministers in the then Musa’s administration.

“Why didnt PBS and LDP object this ‘PTI village’ when they were in power?” Junz questioned.

“PBS is under the same PN banner as Musa, whereas LDP’s Chong came out of retirement to campaign for Najib and Musa in 2018.

“Do they think Sabahans are fools to be so easily misled by them?

“Do they think Sabahans can be so easily tricked by them just because they changed cloths?”

Junz who is also the caretaker Minister of Agriculture and Food Industry, said Sabahans can see the through the divisive roles STAR, PBS and LDP are playing.

“Sabahans can see that STAR and PBS want to split the KDM votes, while LDP wants to split the Chinese votes.
“STAR did that in 2018. Now PBS and LDP are trying to replicate it by splitting Sabahans even further apart.

“This is a classic divide amd conquer tactic used by outsiders who do not want to see Sabahans unite. The more divided Sabah is, the easier it becomes for outsiders to control Sabah, take our resources and continue crippling us Sabahans.”

Previous ArticleBuy local products campaign to stimulate economy
Next Article CM: Sabah can survive on its own