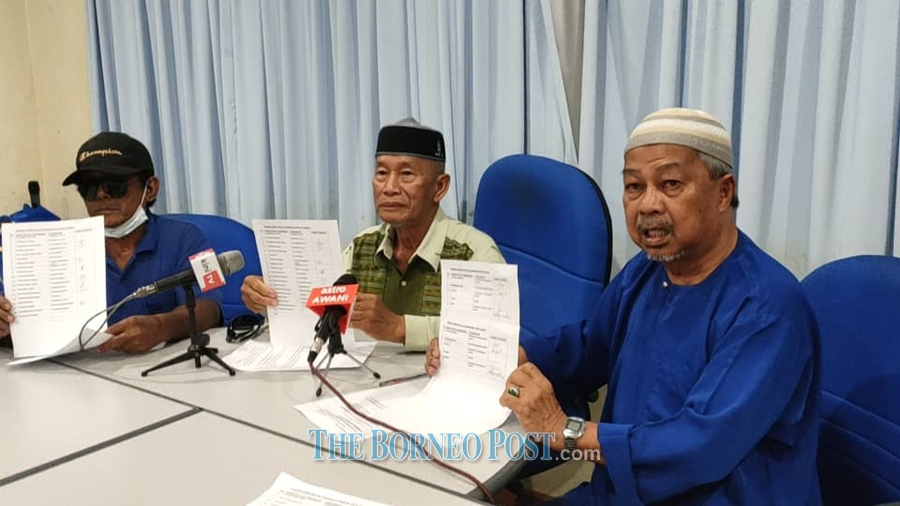 Safar (centre) claimed that 42 Umno branches will not support the party’s candidate if Musa is not nominated.

SANDAKAN (Sept 11): Leaders of some 42 Umno branches in the Sungai Manila state constituency are supposedly claiming that the party will lose if former Chief Minister, Tan Sri Musa Aman, is not nominated as the Barisan Nasional (BN) candidate for the seat in the coming polls.

Umno Taman Sri Gaya Branch chief Safar Sastro, who claim to be representing the group, told a press conference here that the party’s pick, Mokran Ingkat, was not even a member of the party in Sungai Manila.

“He is not even from here. He has never served the people here. How can we vote for him?

“Also, we, as Umno members, want Umno to win this seat. In order to do that, Tan Sri Musa Aman has to be the candidate. We want Musa who we love, who have helped and served the people here, to contest in Sungai Manila,” Safar said.

He claimed that if Musa stood as an independent candidate, he would have the support of the 42 branch chiefs and their members.

“We don’t care which party he represents, we don’t care if he is independent, we will still vote for him,” he said.

The 42 branches are located in four voting districts in Sungai Manila.

Sungai Manila is one of the 13 new state seats in the snap election on Sept 26 with nomination held tomorrow.

Previously, Sungai Manila was under the Sungai Sibuga seat, which was held by Musa.

Besides Mokran, the candidates who have been confirmed by their parties to contest in the seat are Prof. Dr. Mahmud Sudin from Parti Warisan Sabah, Sahidzan Ag. Salleh (Parti Cinta Sabah) and K Zulkipli @ K Zulkifli Harrith (United Sabah National Organisation)

“We respect any leader including Tan Sri Musa but he never applied to become a candidate for Barisan Nasional. That is the only issue,” said Bung, who is also the state Umno liaison chief.