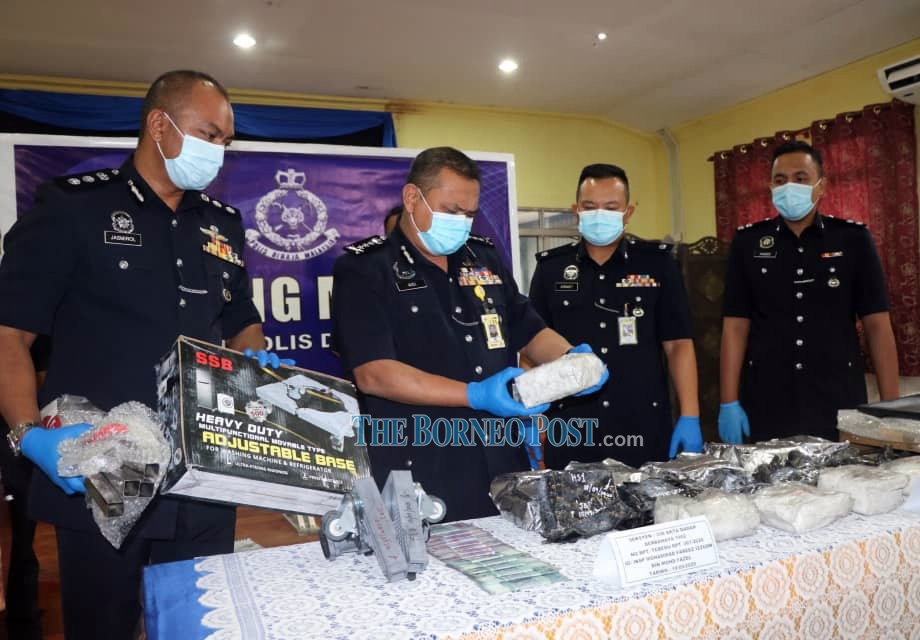 SERIAN: Sarawak Police seized 5.1 kilogrammes (kg) of syabu and arrested a man suspected of being a drug trafficker in front of the main gate of the Tebedu District Office last Thursday.

He said the suspect was arrested while collecting the parcels sent through a delivery service provider from Johor to the location.

“The suspect was arrested on suspicion of being involved in drug trafficking activities and we believe these drugs will be distributed to the locals.

He added that further examination on another brown box found three packets of crystal lumps suspected to be Methamphetamine with the total weigh of about 3,100 grams.

“The total seizure of 5,100 grammes is estimated to be worth RM201,000. The suspect who was arrested was then taken to the Serian Police District for further investigation,” he said.

He said the urine test carried out on the suspect came back negative.

Besides drugs, Aidi said police also seized RM14,000 in cash, a car and a motorcycle with a total value of about RM49,000.

He said the suspect is being investigated under Section 39B of the Dangerous Drugs Act 1952 which carries a mandatory death sentence or life imprisonment and whipping of not less than 15 lashes, if convicted.

The suspect, he said, has been remanded for seven days from Sept 11 for further investigation.

Aidi thanked Sarawakians for their concerns in providing information on drug abuse activities to the police.