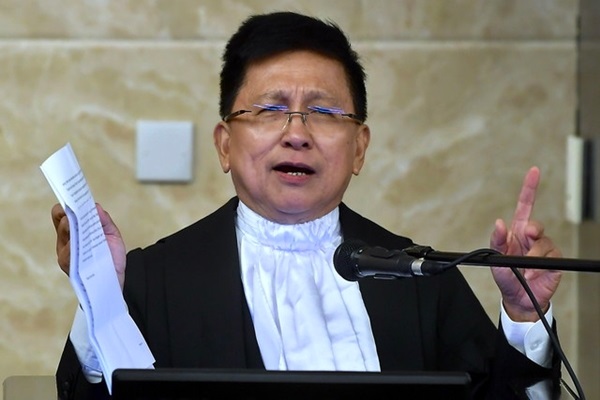 Presiding judge Chief Judge of Sabah and Sarawak Datuk Abang Iskandar Abang Hashim allowed Malanjum’s petition after the Advocates Association of Sarawak (AAS) and the state Attorney-General Chambers (SAG) had no objection to it.

Malanjum and former Chief Judge of Sabah and Sarawak Tan Sri David Wong Dak Wah had filed petitions to be admitted as advocates in Sarawak.

Wong’s petition was heard today but a decision would be made on Oct 8.

During the proceeding today, the SAG among others, argued that Wong did not have the element of Sarawak connection but the AAS argued otherwise.

Malanjum, who retired as Chief Justice in April last year, and Wong, who retired in February this year, are both from Sabah.

During the court proceeding today, Abang Iskandar also ruled that lawyer Voon Lee Shan did not have the locus standi to appear as an intervener in the petitions.

Voon had filed the application because of concerns that if a petition to admit a non-Sarawakian as an advocate or to practise in Sarawak is approved, it would open the floodgates for other Peninsular Malaysian lawyers to set up offices in the state, thereby defeating the objectives and spirit of the Malaysia Agreement 1963.

After dismissing Voon’s application, Abang Iskandar awarded the petitioners, AAS and the SAG cost of RM5,000 each.

Malanjum and Wong followed the proceeding today via teleconferencing. They were represented by their lawyer Chong Siew Chiang.

When met last Monday (Sept 7), Chong said he would feel proud and honoured if these two former judges were to be admitted as advocates in Sarawak.

Chong opined that the fear that the two former judges were going to take away the business of Sarawakian lawyers was too far-fetched, adding that their admission as advocates in Sarawak was not an infringement of the state’s autonomy.

On the same day, Voon’s counsel Lim Heng Choo stressed that Voon applied to be an intervener in the petitions as he was worried when his requests for the petition papers from the petitioners were rejected.

He had argued that legal practitioners should not be excluded to be interveners even though the Ordinance stated only the SAG and the AAS would have the right to intervene.