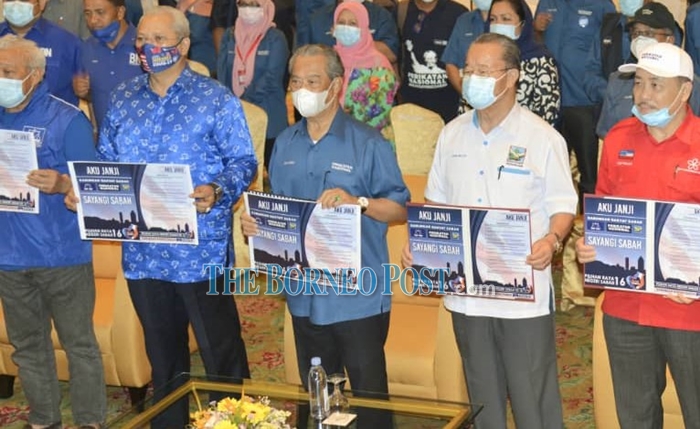 KOTA KINABALU (Sept 16): Gabungan Rakyat Sabah’s ‘Aku Janji’ election manifesto is an “extraordinary” measure in unprecedented times to remedy the impact of Covid-19 faced by the people of Sabah.

Prime Minister Tan Sri Muhyiddin Yassin said at its launching here today that the impact of the pandemic on the socio-economy of Sabah required bold efforts and “better offers” than what had been done by the caretaker government.

“A copy of the ‘Aku Janji’ was given to me, as Prime Minister and not Chief Minister of Sabah, because among the things listed included matters which are related to that of the federal government.

“State affairs and cooperation with the federal government is vital to offer something far better than what the Warisan government has offered.

“Many Sabahans still thirst for development and advancement, so there is still a need for support from all levels of government, whether it is at the federal or state level.

“Even though we (Perikatan Nasional) are a new government, we need to take firm and bold actions to prove that we are a functional and effective government in fending for the people,” said Muhyiddin.

The ‘Aku Janji’ manifesto comprised four main pledges, which are Sabah rights in line with the Malaysia Agreement 1963, a people-oriented leadership built on trust and integrity, Wawasan Kemakmuran Bersama (WKB) 2030 to ensure emphasis is given to Sabah to bridge the development gap, and unity of Sabah.