Thursday, October 22
You are at:Home»News»Analysts: Warisan Plus has more to lose if Sabah voters don’t return to vote 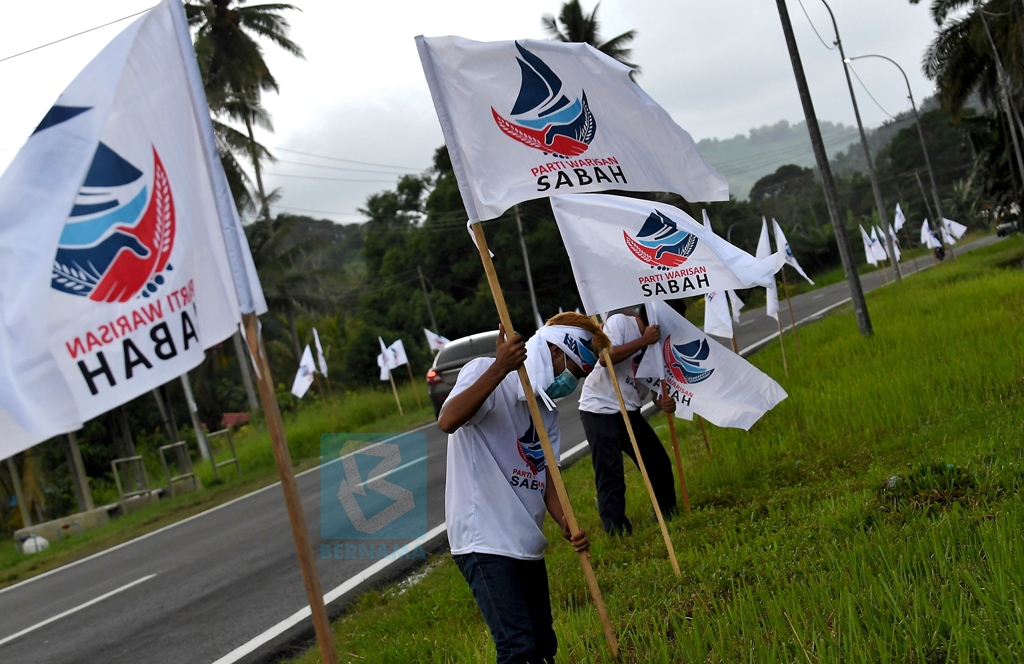 Parti Warisan Sabah workers putting up their party’s flag along a road in Semporna. – Picture by Bernama

KUALA LUMPUR (Sept 18): The coalition led by Parti Warisan Sabah is at a bigger risk at the ballot box if voters who are in West Malaysia do not make the trip home to cast their votes in the state election on September 26, political analysts have said.

Oh Ei Sun, senior fellow at Singapore Institute of International Affairs, said he believes that there will be fewer Sabah voters returning to the state to cast their vote when compared to previous elections.

He listed several reasons, including the polls not being a national-level general election, and some Sabah voters feeling that their votes would be wasted even if they return to vote as elected representatives in Sabah could easily switch political camps.

“At the end of the day these state assembly persons will come up again and jump to the other side. So for them it’s an exercise in futility,” he told Malay Mail.

He also noted that flying back and forth to just to vote was expensive, and that the government’s mulling of quarantining those who went to Sabah to cast their vote and return to West Malaysia would also weigh on voters’ minds.

“Most of those Sabah voters in peninsular Malaysia are more exposed. So very likely if they were to go back, just like in 2018, they are likely to vote for Warisan Plus in elections. So by these voters not coming back, of course it benefits the Gabungan Rakyat Sabah side,” he said.

“By these 200,000 or so voters not going back to Sabah to vote, they are likely to be more progressive-minded so it’s going to affect Warisan results I think. To what extent I cannot tell, but in hotly-contested districts where even one vote will count, I think they will be severely affected,” he added.

Electoral reform group Bersih 2.0 told Malay Mail that it estimates 250,000 Sabahan voters to be residing in Peninsular Malaysia, while Sabah party Upko was reported last month as saying that its study of the 2019 electoral roll indicates that over 200,000 registered Sabah voters are living outside of the state. The Election Commission has meanwhile said more than 1.1 million Sabahans are registered voters.

Oh also said it was quite “obvious” that many of the candidates including independent candidates are actually sponsored by the GRS side, noting that this would make peninsular-based voters in Sabah even more crucial when the majority of seats are hotly-contested with multi-corner fights.

“So already they are splitting some votes especially in those constituencies where the political awareness is not that high yet, in the interiors and so on. So if these voters who are more politically discerning do not go back to vote, it’s likely that their constituencies will get affected more by these independents and more parties contesting.”

Tony Paridi Bagang, Universiti Teknologi Mara Sabah senior lecturer in government and politics, cited mistrust of Sabah politicians due to past events of switching political allegiances as a factor that may discourage voters from coming back to vote.

“I think many Sabah voters in the Peninsula are not willing to return. There are several factors such as costs, Covid-19 and also deficit of trust to politicians (candidates) due to political frogging,” he said.

Bagang said the West Malaysia-based Sabah voters may most likely retain their voting pattern in the 14th general election of voting Pakatan Harapan for “change”.

“In the GE14, this group of voters were inclined to vote for change. Having said that, if these voters do not return, perhaps the Warisan Plus coalition reduces its vote bank especially from those voters who supported their cause.

“However, with the fluidity of local politics here, both coalitions suffer equal chance to get votes,” he said.

Bagang said Sabah voters based in West Malaysia could be the “kingmaker” especially in hotly-contested seats, also noting that they may be more inclined to vote based on a candidate’s party due to the “political frogs” or those who switch political camps.

“Being in Peninsular, they are able to observe the national politics (federal politics) compared to people here in Sabah. The collapse of the PH government exposes them to understand the importance of new political culture, good governance, political system and political reality in Malaysia,” he said.

While acknowledging that voting for a candidate based on the latter’s party doesn’t stop them from later jumping to another party unless there is a law to prevent it, Bagang noted: “But at least, having observed what had happened, there are pressures for them not to do such act.”

In comparison, voters living in Sabah are very attached to “personality politics”, and may choose a candidate based on personality instead of party, even if such a candidate has switched parties in the past, he said.

“Yes. As long as the struggle of such political figure/candidate is very close to them. For instance, Jeffrey Kitingan is labelled as ‘froggy’ politician but he is still able to win in many elections,” he said.

Mohammed Rahezzal Shah Abdul Karim, senior lecturer of political science and policy studies at UiTM Sabah, noted that the thousands of Sabahans in West Malaysia mostly fall under the B40 and M40 income brackets.

He also cited a news reports in April where more than 14,000 Sabahans in West Malaysia falling under the B40 group had applied for Covid-19 financial aid from the Sabah state government, noting: “Going back home casting their votes would surely be an arduous task and require them to stretch their already limited financial capabilities. And the same goes for M40.”

(A June news report had said that 134,318 Sabahans living in West Malaysia were among recipients of Covid-19 aid by the Sabah government.)

Rahezzal said that Sabah voters in West Malaysia may be further discouraged from returning home to vote if the health ministry pushes through with the proposal it was mulling on quarantining those who return to West Malaysia after voting.

Rahezzal said it would be hard to say whether Warisan Plus or Gabungan Rakyat Sabah would stand to lose out more if Sabah voters do not return to vote, noting that there is not enough data to identify the constituencies that they belong to.

“As far as the urban population is concerned, most agreed it’s PH stronghold, hence they not returning home would not make much of a difference except perhaps reducing the majority for PH. The battleground will still be at the rural and suburban constituencies,” he said, adding that it may be more challenging to make assessment on young voters as it would be “premature” to claim that the youth are more inclined towards certain parties.

With the country still taking precautions and fighting the Covid-19 pandemic, the Sabah chapter of Bersih 2.0 had last month urged the Election Commission (EC) to allow Sabahans working in Sarawak and West Malaysia to exercise their right to vote via postal voting. Currently, Sabah voters living outside of the country can cast their votes via postal voting.

But the Election Commission had on August 15 said it currently does not plan to provide postal voting facilities to Sabah voters in Sarawak or West Malaysia with any improvements to be made only if the transparency of the voting process could be retained.

The EC had also in an August 24 news report reportedly explained that the existing system would not be able to accommodate the large number of postal voters and that there is insufficient time to improve the postal voting system as the Sabah election is a snap poll, also citing the increase from the previous 60 to the current 73 seats in Sabah after a redelineation exercise previously.

To reduce the risks of Covid-19 spreading with voters travelling, Upko had last month suggested the EC set up voting centres in Kuala Lumpur, Johor Baru, Ipoh in Perak, Penang, Kuching and Miri in Sarawak, as well as in certain cities within Sabah itself to accommodate rural voters based there instead of requiring them to return to their hometowns.

Oh said efforts such as the crowdfunding campaign will only help a small group of voters, noting that it would be nice to have voting centres in West Malaysia for Sabah voters located there but said the government of the day is “obviously not enthused to put up these centres for obvious reasons.”

Rahezzal also backed the idea of having voting centres for Sabah voters who are unable to make the trip home.

“EC should consider seriously setting up polling centres in every state in West Malaysia and Sarawak as well. We live in a time of crisis. By doing so it would help give every Sabahan a chance to exercise their constitutional rights,” he said.

“The crowdfunding effort is a noble effort but there is only so much they can do. Setting up polling centres at every state is doable as opposed to mail voting. EC can count the votes at the respective polling centres and convey the results to EC Sabah for the final tally,” he said. — Malay Mail