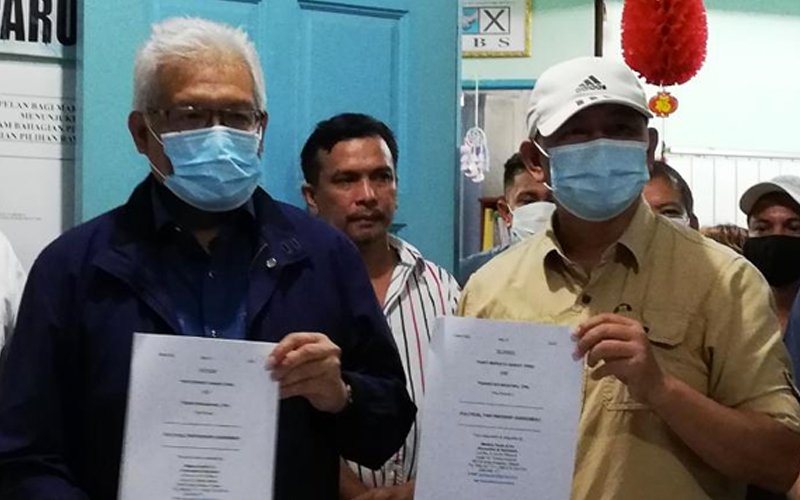 Hamzah (left) and Jahid showing the partnership agreement they signed in Tamparuli on Thursday.

TAMPARULI: Parti Bersatu Sabah (PBS) has signed a partnership with Perikatan Nasional to seal a formal political affiliation in government.

The partnership is also meant to create a political collaboration and election cooperation, especially in the context of the Sabah state election.

However, the signing does not make PBS a member of PN, but rather a partner (rakan sekutu) in both the political associations and in the federal government.

“The case is exactly the same as Gabungan Parti Sarawak (GPS) in Sarawak. They are a partner of PN,” said PBS Secretary General, Datuk Jahid Jahim.

The signing ceremony on Thursday, here, was done between the secretary-generals of PN and PBS, namely Datuk Seri Hamzah Zainudin and Jahid, respectively, witnessed by senior leaders from both parties.

Under the partnership agreement, Jahid said PBS will be a partner in the current election to seek to form the government of Sabah and that the party was allowed to contest the election using its own flag and logo, while being a partner of PN.

All winning PBS candidates would join forces with victorious partners from PN to form the government of Sabah together.

“While we have our own manifesto, PBS shall adopt and share the full content of the PN manifesto during the campaign and the course of the election,” he said, adding the party will also be using images, pictures and messages in print or digital format of Prime Minister and PN President Tan Sri Muhyiddin Yassin in its campaign and communication programmes.

“PBS will uphold cooperation and partnership with all component parties of PN, as constituted in the party’s registration.

“This is the beauty about PBS’ position, we are on our own, fully autonomous, not dictated by any party or parties, and yet part of the bigger family of PN, to jointly develop and make Malaysia greater,” said Jahid.