In total, there are 40 initiatives worth RM35 billion under Penjana. Of this amount, RM10 billion is a direct fiscal injection from the PN government. — Tan Sri Muhyiddin Mohd Yassin 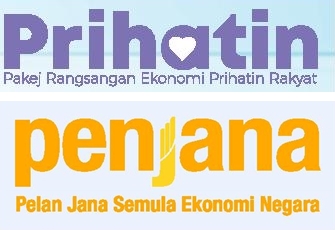 Businesses everywhere were deeply affected when the Movement Control Order (MCO) was enforced on March 18, with almost all public places and premises ordered to close. To rejuvenate the economy when business sectors were allowed to resume operations, the PN government introduced many schemes.

In order to get feedback on the implementation of both Prihatin and Penjana, Minister of Finance Senator Tengku Datuk Seri Zafrul Tengku Abdul Aziz visited Sabah and Sarawak this week.

“The Prihatin and Penjana have benefited 1.93 million Sabahans and Sarawakians to the tune of RM2.1 billion. Close to 100,000 businesses in both states have received aid worth RM1.4 billion through Wage Subsidy, Special Prihatin Grant, and micro loans from Tekun and BSN,” he said.

Although the efforts have borne fruits, the government is aware of limitations and challenges in terms of logistics for channelling the funds and updating recipients’ data to ensure eligible Sabahans and Sarawakians receive the aid, he said.

“The government reassures the people that improvements in implementation and aid channels will continue to be the focus. The PN government will not only close the digital gap, but also improve physical infrastructure between the town and rural areas in both states.

“This is in line with the four main themes of Budget 2021 – caring for the people, steering the economy, sustainable living, and enhancing public service delivery,” he said.

In Sarawak, Zafrul held dialogues on Thursday with industry representatives, including the oil and gas industry, agro commodity, tourism and business.

Industry representatives presented their opinions and suggestions and these will be looked into by the ministry.

Zafrul also revealed that the current situation in the country and the uptake of the various government schemes by businesses under the National Inter-Agency Economic Stimulus Co-ordination and Implementation Unit (Laksana) Report.

The Tekun Business Recovery Scheme helps support the cash flow of micro SMEs so they can sustain their businesses without letting the staff go. As of Sept 4, a total of RM62.7 million had been channelled to 9,313 micro SMEs nationwide, said Zafrul.

Under Penjana SME Financing for those affected by Covid-19, The PN government has allocated RM2 billion, with priority given to SMEs that have never received any financing from banks. As of Sept 4, financing applications from 2,131 SMEs have been approved with a total value of RM562.3 million.

The Penjana Tourism Fund (PTF) is to support local micro-small-and-medium-sized-enterprise in the tourism sector impacted by Covid-19 by facilitating continuity and industry competitiveness of the new norms. It provides financing up to RM300,000 for eligible SMEs, while micro SMEs can apply up to RM75,000 at a financing rate of up to 3.5 per cent per annum for a financing period of up to seven years. A total of 12 financial institutions are participating in this scheme.

For employers, the Hiring Incentive Programme and Training Assistance was introduced with RM1.5 billion allocated to encourage the hiring of workers. In total, 28,577 workers have successfully secured jobs. They include 21,604 new employees aged below 40; 3,722 aged 40 to 60; 232 disabled (OKU) workers; and 3,019 apprentices.

This is further boosted by the Penjana Wage Subsidy Programme with RM10.41 billion in wage subsidies approved to benefit 2.62 million employees as of Sept 4.

Zafrul said based on data from the Department of Statistics Malaysia, the economy is showing gradual signs of recovery.

“Unemployment rate for July fell to 4.7 per cent, from 4.9 per cent in June and 5.3 per cent in May. The reopening of economic activities and initiatives under the Wage Subsidy Programme, Reskilling and Upskilling Programme, Hiring Incentive Programme and Training Assistance have also contributed to the recovery of the labour market since June.

“National retail and wholesale trade performance also recovered in July after recording sales of RM108.7 billion (-3.5 per cent compared to -8.4 per cent in June 2020). Motor vehicle sales recorded a high growth of 5.8 per cent versus the same month last year to RM8.1 billion. This encouraging growth numbers can be attributed to the sales tax exemption that was announced by the PN government under Penjana,” he said.

The industrial production index (IPI) has also returned to positive growth at 1.2 per cent in July against the same period last month. This marks the first positive growth since February, added Zafrul.

Contractor Franklin Lim Tiam Yang, 27, is grateful for the RM50,000 Prihatin interest-free loan as it has enabled his business to continue operations during this trying time of the Covid-19 pandemic.

“I was able to continue operating my business, Forever Succes Construction, for several months even though no income was coming in,” he said.

He is also thankful for the six-month loan moratorium placed by Bank Negara Malaysia, as this enabled him to keep his workers.

“In a way, because of the help rendered, no one in my company lost their source of income and could continue to work,” he said.

Lim pointed out for small business owners like himself, it was a struggle to maintain the company’s cash flow, particularly during the enforcement of the Movement Control Order (MCO).

“There was the workers’ welfare that need looking after as well as the running costs of the company,” he said.

During the MCO, Lim’s business faced troubling times due to unpaid project costs, causing his overhead costs to his suppliers to increase and rendering him unable to pay his workers. The Prihatin Micro loan allowed him to pay for the overheads and enabled a capital injection to implement the company’s projects.

NON-GOVERNMENTAL organisation Borneo Sun Bear Conservation Centre (BSBCC) is a rescue and rehabilitation centre for sun bears, which has been running since January 2014. It currently houses 45 sun bears and is very much dependent on the admission fees collected from tourists, particularly foreigners, to cover its operating costs.

Due to Covid-19 and the enforcement of the Movement Control Order (MCO) in mid-March this year, the centre saw its income plummeted to nil between March and June.

Even with the lifting of the MCO, which allows for domestic tourism, the centre is still suffering as it is receiving only 5 per cent of the number of visitors during the pre-Covid-19 era.

“We were unable to pay our staff’s salary; so for the first three months, we were able to get the Prihatin assistance of RM1,200 for each of our eligible staff.

“We have 27 eligible staff, so we got RM32,400 from March to June. And from July to September, we got support of RM600 per eligible worker, which totals to another RM16,200,” said the centre CEO Dr Wong Siew Te.

Wong said he hopes the Prihatin aid, which is supposed to end this month, could continue as he is already wondering how to make end’s meet at the centre.

Wong also called on kind-hearted members of the public to adopt sun bears as well as to donate to their care.

“We are grateful for any assistance,” he said.

MICHAEL Lo Vun Leong, 45, has been involved in the transportation of goods since 2016. Married with one child, he runs a business called 43 Shop. Due to the Movement Control Order (MCO) caused by the Covid-19 pandemic, his business suffered because he could not operate.

“I was close to ceasing my operations and without the loan of RM60,000 from PRIHATIN, that might have happened,” he said.

He was fortunate when his application for the interest-free loan was approved in just two weeks.
“And I received the assistance in less than a month,” he said.

He added that with the new cash injection, he was able to pay his 18 workers and even managed to buy a second-hand lorry to expand his business operations.

“I am grateful to BSN and to the Federal Government, particularly the Prime Minister, who provided the assistance. The benefit is huge for business operators who struggled during the MCO,” he said.