Tuesday, February 7
You are at:Home»News»Adhering to the new norms to protect each other
For the freshest news, join The Borneo Post's Telegram Channel and The Borneo Post on Newswav.

COVID-19 has been part of every Sarawakian’s life since it was first detected in Kuching on March 13. Though the number of new cases seems to be under control, the threat of the virus lingers as there is no vaccine; hence the importance of adhering to the new norms. 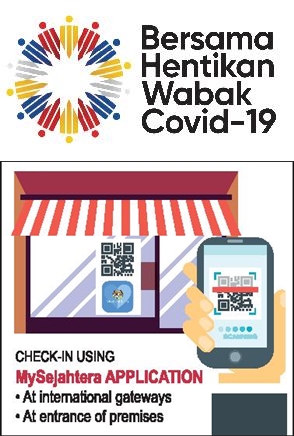 Covid-19 survivor Othman Mustapha, 66, is a strong believer of following standard operating procedures (SOPs) and the new normal lifestyle, along with all his family members.

He pointed out this is not hard to do – just wear a face mask when out in public, avoid crowded places, wash hands frequently, skip handshakes, and keep up with the latest information on Covid-19.

“Even though I have fully recovered, it took me a while to go out and about. Knowing that we have been practising the new norm SOPs since MCO (Movement Control Order) started, I felt safe to go out,” said Othman.

Unfortunately, this feeling did not last as what he saw with his own eyes differed from what he had imagined.

“I was totally frustrated when I saw some people were not wearing their face mask, and I was thinking, he or she may get infected easily or may infect others as well by simply ignoring the new norm practices.

Othman gets his temperature checked.

Though the government has taken significant precautions to prevent virus transmission, some people ignore the new normal and SOPs and take them lightly,” he lamented.

He urged everyone to take the pandemic seriously and adopt essential precautionary measures by adhering to the government’s SOPs to protect not only themselves but also their loved ones from Covid-19.

Othman shared how hard it was for him mentally, emotionally, and spiritually to be hospitalised and remain in isolation for 62 days away from his family, pointing out he hopes no one else has to experience it.

He revealed that it all started a week after he paid his respects to a relative, who passed away on March 18 and was later found to have been a victim of Covid-19.

Othman started feeling unwell and was initially in denial regarding contracting the virus as an early test result was negative.

Othman sanitises his hands before entering a shop.

However, on March 27 his health deteriorated and he actually fainted in his room. The next day, a subsequent test came back positive.

Thoughts of hopelessness and despair raced through his mind after he was admitted for care in the Covid Ward at the Sarawak General Hospital.

“On the third day of being warded, I thought that I was going to die as I could not breathe,” he said.

He felt relieved when the doctor said he would be discharged the following day but would remain in quarantine at the Youth and Sports Complex for more tests.

Othman was at his lowest during the first day of Hari Raya Aidilfitri on May 24, as he remained in isolation, away from his five children and 15 grandchildren.

As a Muslim, he saw his plight as a test to bring him closer to Allah.

He thanked the front-liners who have made great sacrifices during this pandemic, especially the doctors and nurses who dedicatedly cared for him, and his whole family who never stop praying and encouraging him during this tough time.

For Wishesland president Chi Poh Yung, Covid-19 has made keeping his son Jervis safe even more challenging as the boy has cerebral palsy, which weakens the immune system.

Since the pandemic was first detected in Kuching, his wife Chong Mui Na has restricted Jervis from leaving the house and kept him from returning to SMK Batu Kawa, which has allowed exemptions for students with special needs.

She does allow Jervis – who was among Boccia’s pioneers in Sarawak in 2018 and the youngest Sarawakian athlete to compete at the 2018 Para Sukma in Ipoh, Perak – to attend training three days a week.

“We don’t let him back to school yet for his own safety. He will resume school after the Boccia National Circuit in October,” said Chi.

He said the family pays extra attention to hygiene and those around Jervis, the venue, and equipment used.

“We will give him more water to drink as he sweats, let him have supper after exercise, and always check with him about his body’s condition. We are now very particular on any signs of discomfort in our child to ensure immediate intervention and precautionary actions can be taken,” he said.

“We try not go out if possible, only go out when I meet clients or my wife goes to buy daily needs. We follow strictly SOPs like wearing masks, sanitising hands, recording names, taking temperature, and once home we will shower immediately and change clothes.”

As there are only three of them at home, it is easier to keep clean and disinfect the house thoroughly.
“We also have a small pouch prepared by his mummy where we keep basic things such as face masks, disposable gloves, sanitiser, rubbish bags, and others. This keeps all our hygiene needs within easy reach.”

Chi said although Jervis is lonely and misses school, he understands the grave situation globally, listens to advice, and is willing to cooperate.

“He’s at home doing normal physiotherapy programme, practising Boccia with his mother, completing school assignments given by teachers, relaxing his mind, and of course having fun watching TV programmes, which are more on educational programmes and Boccia international matches, giving him an understanding of how an international event looks.”

Jervis also watches movies and visits his grandparents nearby once in a while.

Wee speaks to reporters from behind an acrylic screen.

According to Kuching South Mayor Datuk Wee Hong Seng, the public’s compliance rate to SOPs has been good but there will always be that one out of 1,000 who is stubborn when it comes to practising the new normal.

However, he said the public now actively report non-compliance such as overcrowding, not wearing masks in public, and lack of cleanliness.

“This shows the public cares about their safety and safety of others, especially with this highly contagious Covid-19. And this is why our performance in controlling the spread of Covid-19, we are doing very well,” he said.

“Though we’ve received a lot of complaints, we take it positively that people here have a sense of belonging and make us feel together. We also received a lot of food and masks donation for distribution to the poor, and this makes us (Kuching South City Council – MBKS) feel that we are not alone.”

The Post Covid-19 New Norms Park is next to SMK Padungan.

He pointed out that enforcement team members have been unable to take leave since March 18 when the MCO was first enforced, working round the clock including attending to reports received at night.
To encourage social distancing while exercising, MBKS recently built a Post Covid-19 New Normal Park located in the city hall’s compound.

Built from crowd funding and donations, the area is divided into individual squares that are evenly spaced out to adhere to the one-metre social distancing rule.

In the centre is a tribute to medical front-liners, while large potted plants used as dividers bring users back to nature and the choice of yellow paint around the area represents a ray of hope and positivity.

“This is the least we’ve ever spent on a park, RM20,000 plus, and the donations included paint and even manpower to paint the park. It also took only one month to set up,” Wee added.

The park will also be used for this year’s Lantern Festival, which falls on Oct 1.