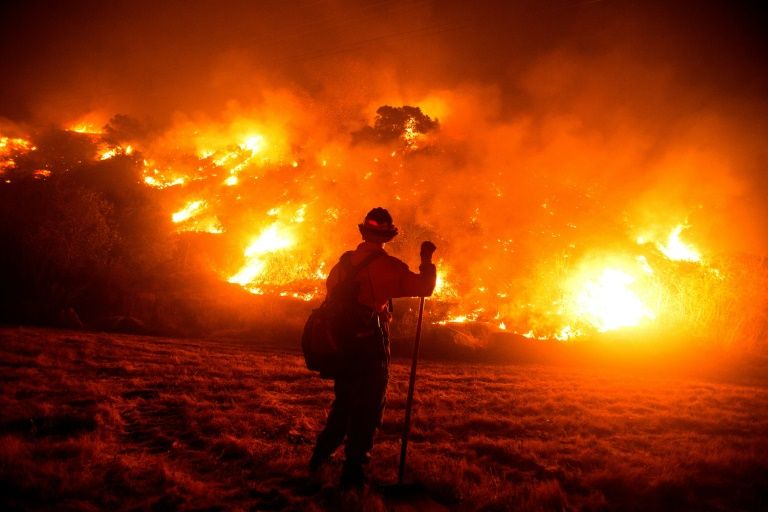 A firefighter works at the scene of the Bobcat Fire burning on hillsides near Monrovia Canyon Park in Monrovia, California on September 15, 2020. – AFP photo

This year’s ferocious wildfires on the US West Coast are taking a heavy toll on exhausted firefighters who see no end in sight to the blazes, with the coronavirus pandemic adding another layer of risk.

For Darrell Roberts, a 20-year veteran firefighter in California, the more than two dozen major wildfires raging across the state and the unprecedented scale of the blazes are a stark reminder of climate change and the new normal.

“When resources are stripped thin and literally every firefighter is out on the frontlines, and you have firefighters coming from all over the US and other countries, we know that we’re in unprecedented waters,” Roberts, 42, told AFP after a three-week deployment on the frontlines. “We haven’t seen fires like this before.”

The severity of the ongoing blazes — which have devoured more than five million acres in California, Oregon and Washington state and killed more than 30 people — has tested the limits of traditional firefighting techniques and pushed crews to the point of exhaustion, he said.

But while the intense heat and unpredictable flames are known enemies for firefighters, adding to the challenge this year is the Covid-19 pandemic, which has further stretched resources.

“Covid is already a high concern in our day-to-day operations, when we’re not involved in fighting fires, and now we’re combining both,” Roberts said. “And that’s put a tremendous amount of stress and strain on firefighters, because our job is to save lives, but we now also have to protect ourselves.”

He said fire officials have had to adjust the layout at fire base camps to reduce the risk of spread, and many firefighters have resorted to bringing their own tents for added security.

“Our last seven days out fighting the fires, we literally slept out in tents camping,” said Roberts, a father of two teenagers who is battalion chief at his fire station in Chula Vista, located in southern California.

“So imagine, you’ve been out fighting a fire for 24 to 36 hours, it’s hot with temperatures well above 100 Fahrenheit (38 Celsius) and you’re coming back to a tent to get some rest before going out again,” he said.

Another issue is the fact that some of the major blazes raging in California since mid-August are burning in rugged and remote country, requiring firefighters to drive or walk several hours to reach them and the same amount of time to go back to base after a grueling shift.

Many spend much of their rest period repairing tools and other equipment before heading out again to combat the flames.

Roberts said crews rely mostly on each other for support while out on the frontlines, and also have access to professional help to cope with the death and destruction they witness and to maintain a semblance of normalcy with their families back home.

“We had a captain on a crew during one of the fires this summer calling home because his wife and two young daughters had to determine how to put down one of their beloved pets that was dying,” he said.

“When spouses and kids are getting sick, anniversaries, birthdays, we can’t always be there,” he added. “We’re missing a lot of precious time away from our families… and you can’t get it back.”

The work-related stress is linked to the high rate of suicide among firefighters, who are more likely to take their own life than die in the line of duty.

The historic proportions of this year’s fire season — expected to last through the end of the year — have made clear that the blazes are becoming the terrifying new normal, said Roberts, who is a member of the International Association of Firefighters.

“This is what I know as a firefighter that has been on the ground for 20 years,” he said. “Every year temperatures are increasing, we continue to set records and it’s getting drier and drier.

“Climate change has a direct impact. It’s that simple to me,” he added. “And we don’t see an end in sight.” – AFP