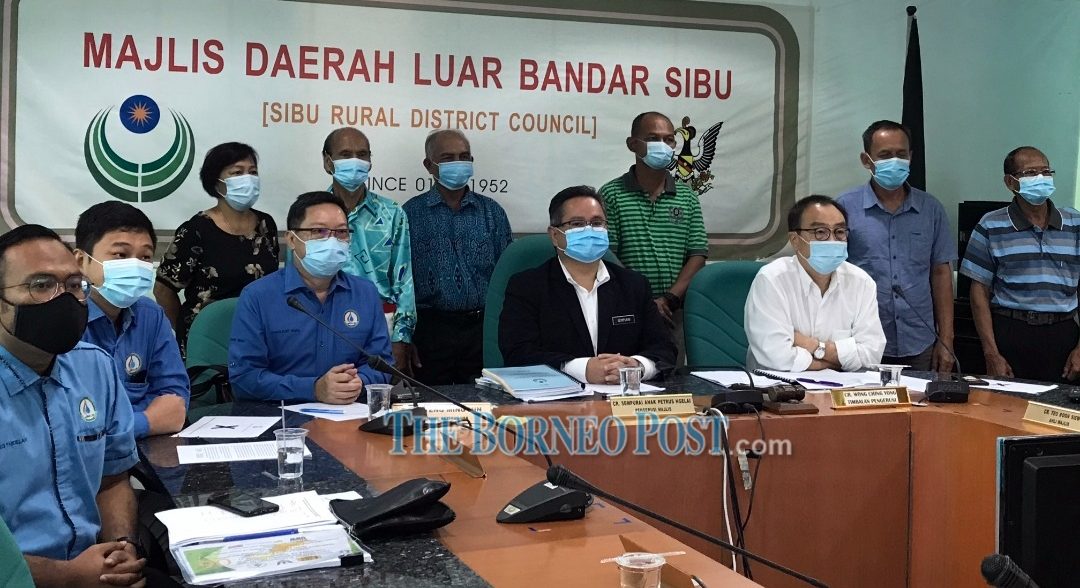 (Seated from second left) Chieng, Chang, Sempurai, Wong and others at the press conference.

He noted that 53 longhouses will be affected by this water interruption.

He said the works are scheduled to be carried out on Sept 23 from 5pm until 1am on Sept 24.

According to him, JBALB Sarikei and Pan Borneo contractors will be deploying nine water tankers ranging from 1,000 litres to 5,000 litres on scheduled basis to the affected areas.

“The interruption will be for about eight hours starting 5pm on Sept 23 until 1am on Sept 24.

“Because the pipeline is empty, it will take time to build up the pressure, so there will be further interruption because of this. However, this will be overcome by water tankers that we are going to supply,” he said.

He said mostly KJD area which will affect eight longhouses has been identified as high impact areas.

Chang said JBALB, together with Sibu Rural District Council (SRDC) and Pan Borneo Highway contractors will work closely to minimise the impact of the water interruption as much as possible.

“However, this is unavoidable because we need to make way for the road construction to complete, then only we can install the permanent pipeline.

“We also need to complete the road construction so that everyone can enjoy it. We really appreciate that the people can understand this,” he pointed out.

Meanwhile, Sarikei divisional water engineer Chieng Ghin Wei said the low water pressure issues has been there especially at KJD area for quite some time.

However, Chieng said the state government had come up with a treated water supply project to solve the issue.

He said currently, the project is about 12 per cent completed and is expected to be completed next year.

“We have the solution for the water supply issue at KJD areas and the project is currently ongoing,” he added.

Meanwhile, SRDC chairman Sempurai Petrus Ngelai said the council will monitor to ensure that the work will be done smoothly, and all those longhouses affected will be provided with water tankers.

Also present at the press conference were SRDC deputy chairman Wong Ching Yong, contractors, and the longhouse chiefs of the affected longhouses.