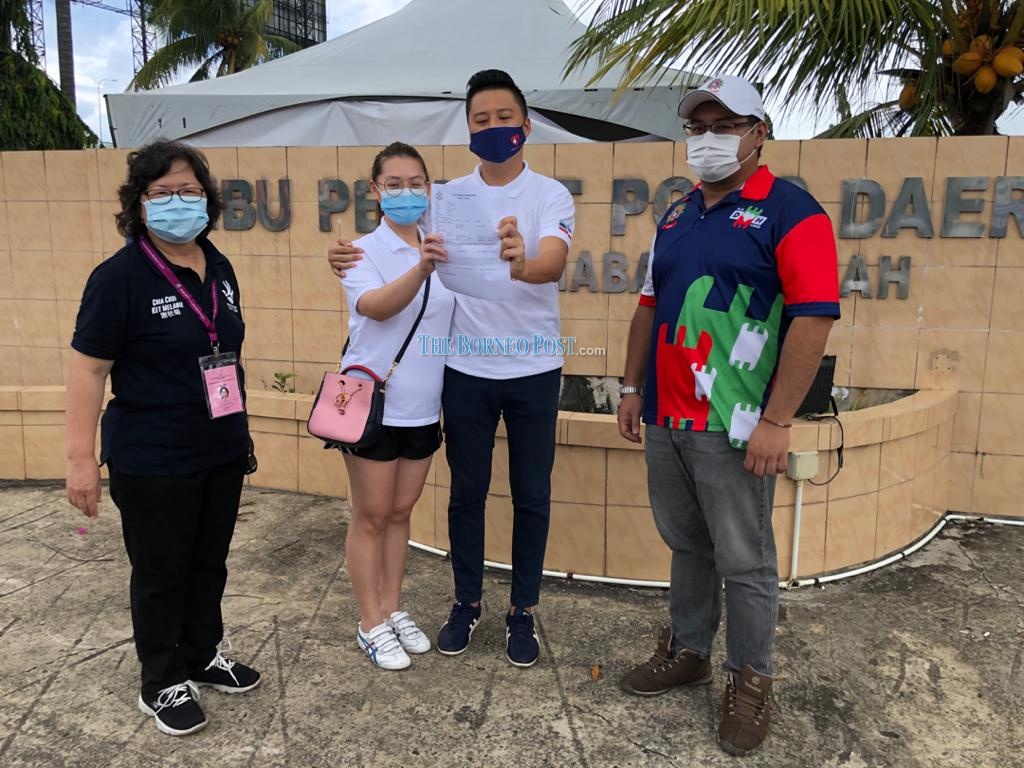 (from left) Chia, Andrea, Lu and Daniel outside the police station.

Lu told reporters after lodging the police report at the Karamunsing police station that he had been informed by a friend about an alleged sex video that his friend had received via a Whatsapp group chat.

“It was preceded by a clip showing photos of me, (Barisan Nasional candidate for Likas) Dr Chang kee Ying, Datuk Junz Wong and (former Luyang assemblyman) Ginger Phoong. It also said to ‘stay tuned, more coming’. The 10-second video involved someone who they claimed is me.

Lu was accompanied by his wife Andrea Oo Yong, who said that she stood by her husband and that it was not him in the alleged sex video.

“I know my husband the best. When I watched the video, I knew that it was not him. My opinion is that they want to threaten him because his is a successful businessman and their aim is to create tension in our family and ruin our relationship because family is very important to him.

“But they have not succeeded and to me their actions are deplorable,” she said.

Lu added that he would be bringing the matter up with the Malaysian Communications and Multimedia Commission (MCMC), as this style of dirty politics needed to be eliminated.

“This is not the politics we want. The most important people in my life are my family and if my family can trust me, I believe that the public can also trust me,” he said.

The smear tactic against Lu comes after fellow Likas candidate from BN Dr Chang Kee Ying was similarly implicated after alleged nudes of her circulated over social media while former Luyang assemblyman Ginger Phoong had been implicated in an alleged sex tape last month.

Chia and Daniel were also present at the police station to show their support for a clean election in the fight for the Likas seat and both expressed their concern of these smear tactics as they felt there was no need to resort to these tactics in a Sabah state election.

“We do not need to resort to hate politics as it is not part of Sabah’s culture. Today is the last day of campaign so we hope nothing adverse will happen until tomorrow,” said Chia, who had also fallen victim to a smear campaign when she contested in 2013 election.

Daniel disclosed that he too had fallen victim of a smear campaign, although his was considered mild compared to what happened to Lu and Dr Chang.

“The day after nomination, cartoons of me womanising, abusing drugs and alcohol as well as claiming that I was paid to contest were circulated. To me, it was funny so I made a video asking those responsible to show proof of all that they claimed and it stopped.

“But what they did to Jeff is a low blow and I do not agree with this sort of tactic,” he stressed.