Monday, May 16
You are at:Home»News»Nation»Success of River of Life project already visible in city centre

This article is in conjunction with World Rivers Day which is celebrated on the fourth Sunday of September. This year it falls tomorrow 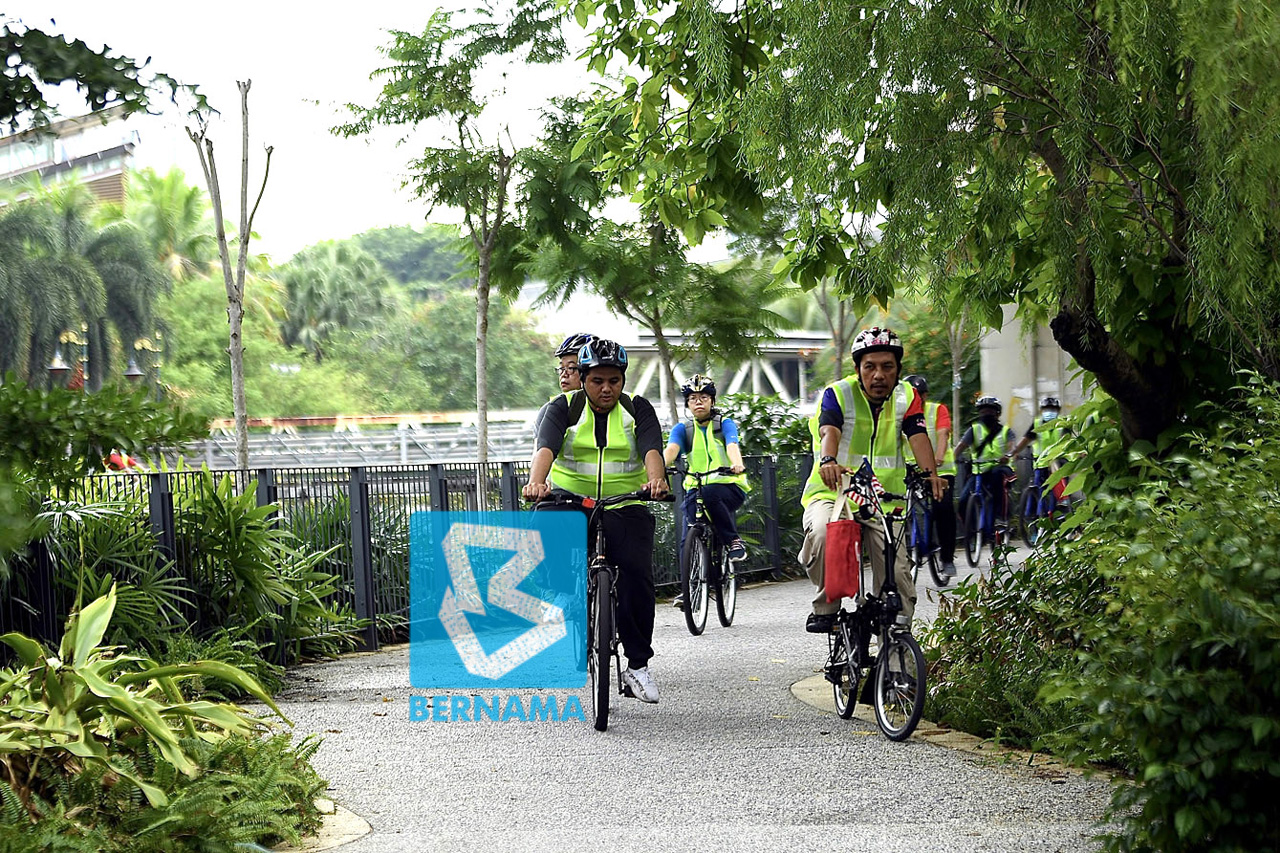 Members of media participate in a cycling tour of the completed ROL sites. — Bernama photo

KUALA LUMPUR: The  Klang and Gombak mega River of Life (ROL) project’s completion date has been extended by another four years to 2024 but it is already proving to be a stellar urban river restoration initiative.

In January last year, it was listed in the world’s top 10 waterfront districts by the Independent, the United Kingdom’s online news portal.

Zooming in on the scenic Masjid Jamek, situated in the historic area where the Klang and Gombak Rivers converge, the portal said it is the focus of one of the most expensive urban river restoration projects ever undertaken but “it (ROL) has paid off… today, there are riverside cafes, hi-tech fountains, bicycle paths and night-time light show which turns the water into stunning cobalt blue”.

Before the RM3.36 billion ROL project kicked off in 2011, both the rivers reeked of rotting garbage, industrial effluents and sewage, especially after a heavy downpour, and their waters were forever murky.

The ROL project, led by the Ministry of Federal Territories in partnership with the Department of Irrigation and Drainage Malaysia (DID), Kuala Lumpur City Hall (DBKL) and other agencies and non-governmental organisations, is aimed at reviving the Klang River and Gombak River and transforming their banks into waterfront areas with economic and commercial value through river cleaning (along a 110-km stretch in the Klang River basin which also covers Gombak River and eight tributaries), beautification and land development activities. 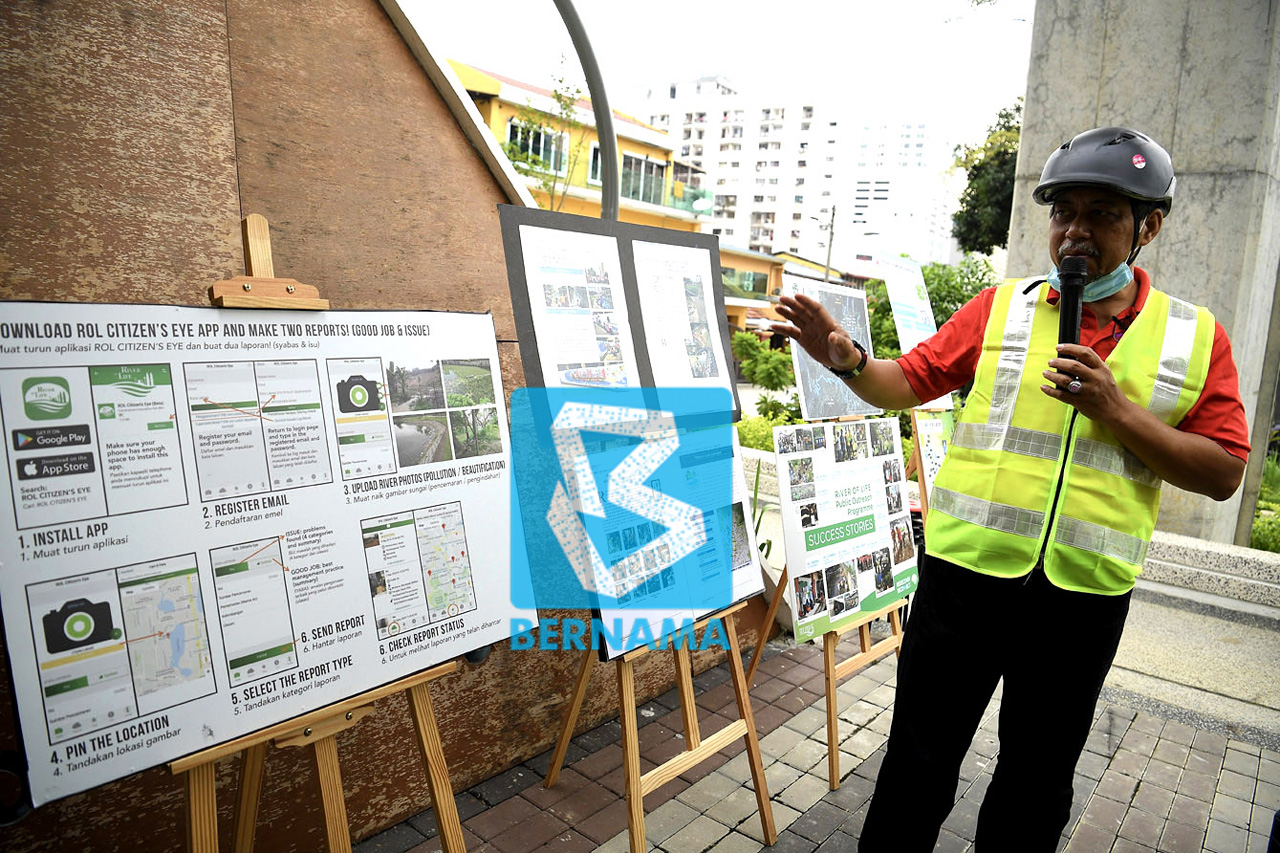 DID River Basin Management Division director Md Khairi Selamat said to date 94 per cent of the ROL project has been completed and that the completion date has been extended to 2024 from 2020 to enable the remaining work packages to be completed.

He said DID was working together with local communities through ROL-POP (Public Outreach Programme) Phase 5 (ROL-POP 5) to transform riverbanks into sustainable sites that are easily accessible to the public.

“We’re not only focusing on cleaning up the riverbanks but are also looking into the rivers’ water quality aspect to ensure that we attain a water quality index that allows body contact without causing any skin irritation,” he said.

“In the early stages, it was a challenge for us to clean up the polluted and stinking rivers. The traps we installed were able to collect all types of garbage and foreign matter floating in the rivers which we later disposed of in accordance with the standard operating procedures,” he said.

Household furniture, electrical items and even motorcycle frames were recovered from the rivers during the cleaning operations for which the authorities spent about RM500,000 a month. 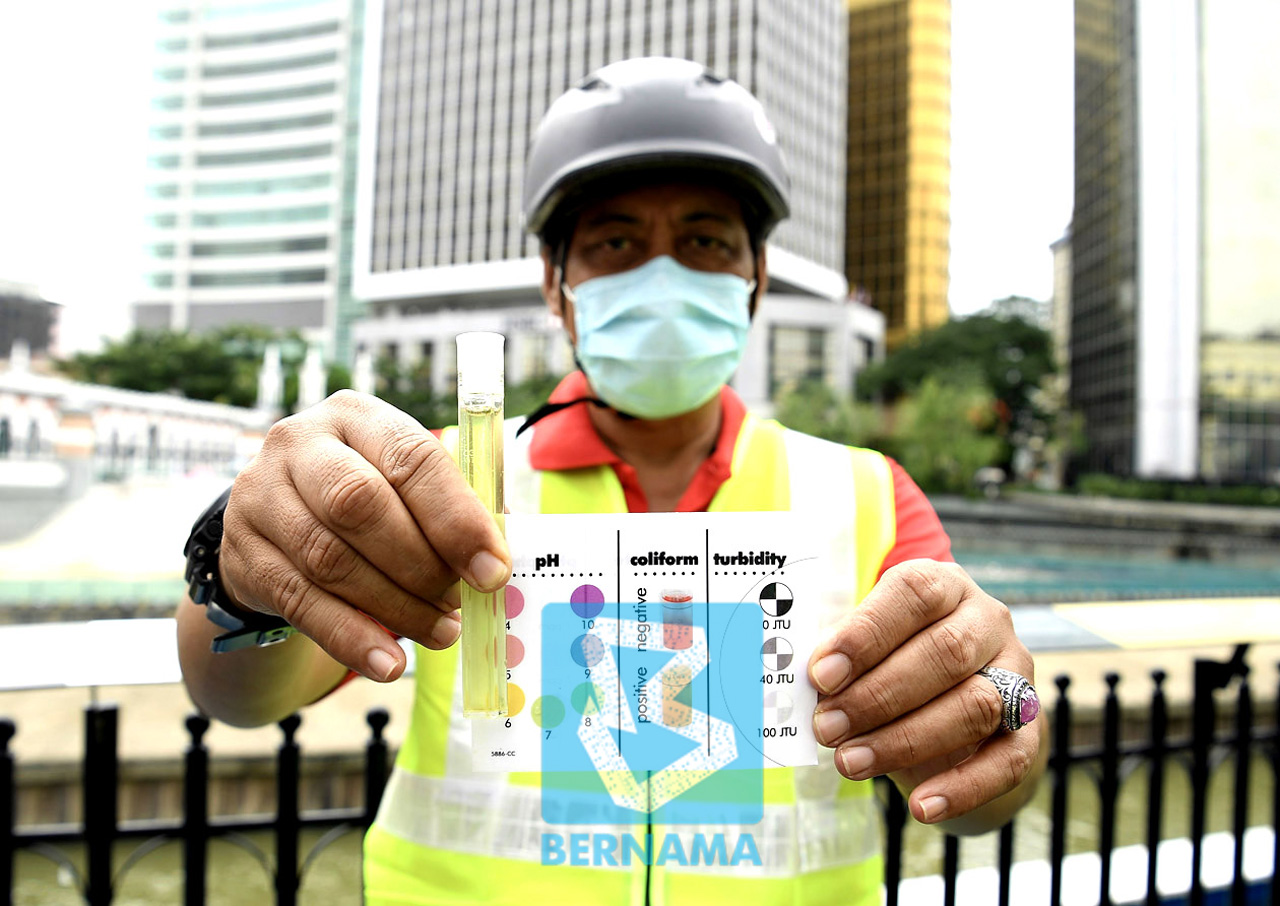 Md Khairi said the success of the ROL project is highly dependent on close collaboration between government agencies and the community.

He said ROL-POP 5 was implemented to improve the attitude and behaviour of the public in order to compel them to view rivers as assets and to feel a sense of ownership over them.

“We don’t want them to treat rivers as dumping grounds for their trash, instead we want them to foster a caring attitude towards rivers,” he added.

The authorities have also been working with schools to carry out campaigns to raise awareness on river and environmental conservation efforts.

Md Khairi also said that a smartphone application called Citizen’s Eye was introduced two years ago to enable city folk to be the eyes and ears of the authorities and be a part of the city’s river management and cleaning initiative.

“This application allows the public to report pollution and vandalism incidents to various agencies, such as Department of Environment, DBKL, DID and local councils,” he said.

The agencies have also helped to set up ‘river communities’ such as ‘Friends of Gombak River’ and ‘Friends of Sungai Batu’, comprising members of the local community, to help monitor the rivers.

Global Environment Centre (GEC) river care coordinator Dr K Kalithasan, meanwhile, said through the ROL-POP 5 initiative, his organisation has been educating the public to get to know their ‘river address’ based on the map and location of their residence.

“It’s important for the people to get to know their river address, particularly those living near rivers.

“They must know where the source of their water supply is and where the wastewater from their homes flows into.

“When they get to know where their water supply comes from, they will become more wary of the threats to water supply, thus making it easier for them to identify the steps to be taken to safeguard raw water sources,” he said. 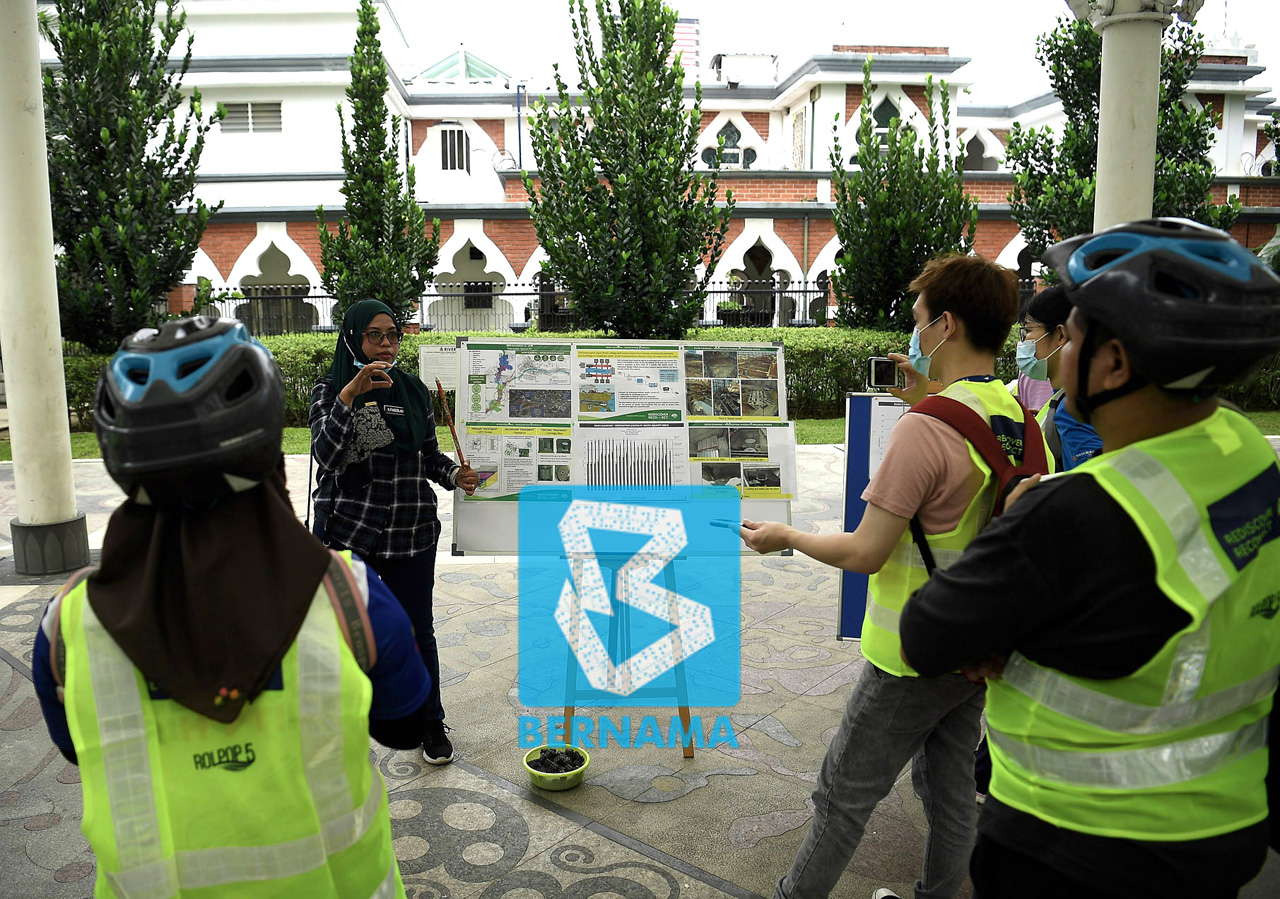 Meanwhile, about 20 media practitioners, as well as DBKL and DID officials, participated in a cycling tour of the completed ROL sites in Kuala Lumpur, organised by DID and GEC two weeks ago.

The four-hour tour saw the group cycling on a two-km dedicated bicycle lane, starting from Dataran DBKL at Jalan Raja Laut to Medan Tiong Nam, Putra World Trade Centre, Jalan Ipoh, the ‘Blue Pool’ at the confluence of the Klang River and Gombak River, Plaza Batik in the Masjid Jamek area and Menara
Pandang before ending at Dataran DBKL.

Cycling on the blue ROL bicycle lane along the banks of the Klang River in the city centre can be a pleasurable experience as it takes one through historic sites such as a 200-year-old Tamil school (Sekolah Rendah Tamil Appar). From here, along the river corridor up to Taman Tiong Nam – which is among the city’s earliest settlements – facilities for recreational and leisure activities are available for the public.

DBKL Project Implementation and Building Maintenance Department deputy director Dalilah Bee Abdullah said under the ROL project, City Hall was tasked with beautifying a 10.7-km stretch along the river corridor and sites in the vicinity of the Klang River and Gombak River. It involved 11 precincts and nine work packages.

“We built infrastructure such as the special three-km bicycle and pedestrian lane from PWTC to Lebuh Pasar Besar that was completed in July this year. This lane is a part of the 10.7-km bicycle lane from
Gombak to Midvalley Megamall,” she said.

Dalilah said the recreational facilities available at the river corridor will not only connect the local communities with the river but also enable them to keep themselves fit.

“One of the aims of the ROL initiative is to build healthy communities by enabling them to participate in recreational activities along the river corridor,” she added. — Bernama

Previous ArticleSime Darby Plantation, Prison Dept give second chance to parolees
Next Article The year of living in isolation – how are we taking it?