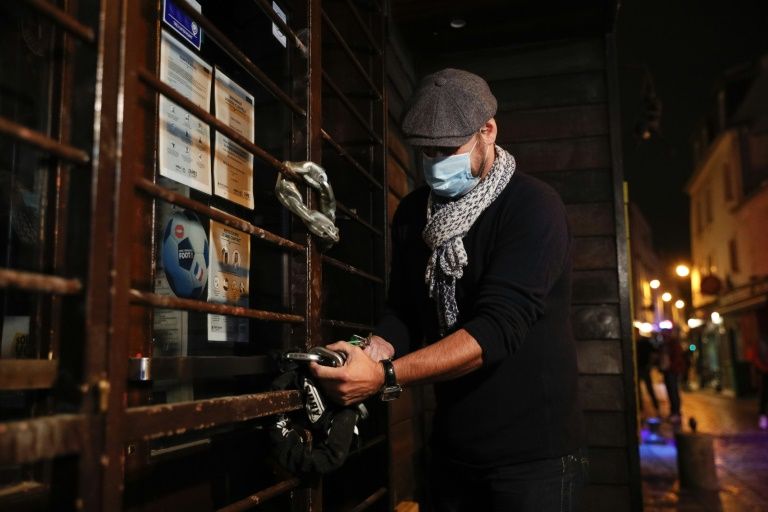 Bars and cafes in Paris look likely to shut down until further notice. – AFP photo

Paris was preparing on Sunday to be placed under maximum coronavirus alert as alarming Covid-19 infection numbers appeared to leave the French government little choice but to tighten restrictions in and around the capital.

Paris’s trademark bars and cafes are threatened with complete closure as early as Monday after Health Minister Olivier Veran announced that only improved Covid-19 infection rates could prevent such a step.

If recent trends were confirmed “we’ll have no choice”, he warned on Thursday, saying new restrictions would mean “no more family gatherings, no more evenings out, and a total closure of bars”.

But a reprieve looks unlikely after France reported a 16,972 new coronavirus cases on Saturday alone, the highest daily number since the country began widespread testing.

Figures from the regional health agency ARS show new coronavirus cases remaining above 250 per 100,000 people in Paris, a threshold triggering the maximum alert protocol which has already hit the southern cities Aix-en-Provence and Marseille and their surroundings, as well as the French overseas territory of Guadeloupe.

“There is no justification for denial,” said the ARS director for the Paris region, Aurelien Rousseau, on Sunday. “The numbers are what they are, and they are weighing heavily,” he tweeted.

Interior minister Gerald Darmanin acknowledged that the looming closure of bars and cafes would be “tough” for everyone concerned.

“We are French, we love to drink, to eat, to live, to smile and to kiss each other,” he told broadcasters LCI and Europe 1 on Sunday.

“But we’re also doing this because the people want us to,” he added.

BFM television on Sunday published a poll saying that 61 percent of people living in Paris and its suburbs were in favour of a complete closure of bars, which are currently authorised to remain open until 10 pm.

Paris mayor Anne Hidalgo told reporters on Sunday that “it’s not a done deal, there is still work being done, we’re still talking”. But she also conceded that the health situation was “very serious”.

The government has said it will target primarily establishments that “serve alcoholic drinks without food”.

Restaurant owners are still hoping that they can dodge a similar fate, at least for now.

The health authorities are evaluating a proposal submitted by restaurants for voluntary restrictions — including registering the home addresses of their clients and limiting the number of people at each table — before submitting their recommendations to the government.

Other large French cities including Lille, Lyon, Grenoble and Toulouse are also hovering near the maximum alert threshold and similar measures as in the capital could be in store for them, too.

Employer organisation UMIH, which represents cafes, bars, hotels, restaurants, brasseries and discos, has warned that 15 percent of France’s 220,000 establishments in the sector are threatened with bankruptcy because of virus restrictions, with up to 250,000 staff facing unemployment.

The government has said it will take every precaution necessary to avoid a new state of emergency that would require a generalised lockdown like the one imposed at the height of the outbreak, from mid-March to mid-May.

The country’s total death toll from Covid-19 is 32,198 after recording 49 more fatalities on Saturday. – AFP