Wednesday, August 4
You are at:Home»World»Trump improving, could be discharged Monday: doctors 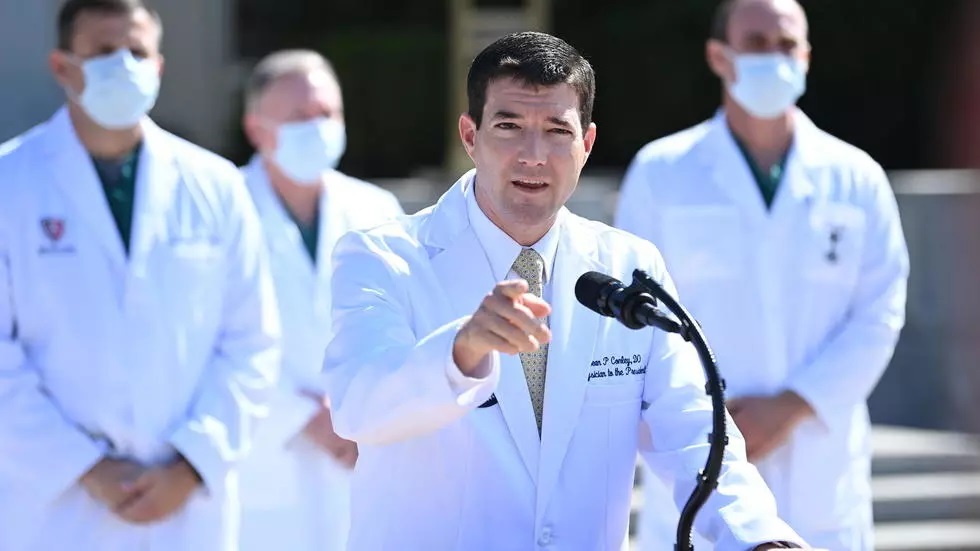 White House physician Sean Conley answers questions surrounded by other doctors, during an update on the condition of US President Donald Trump, on October 4, 2020, at Walter Reed Medical Center in Bethesda, Maryland. – AFP photo

US President Donald Trump has “continued to improve” as he is treated for Covid-19, his doctors said Sunday, revealing he could be discharged as early as Monday.

His medical team said his oxygen levels had dropped twice briefly in recent days and he is being treated with steroids, but they gave an upbeat assessment of the 74-year-old president’s health and outlook.

“Since we spoke last, the president has continued to improve. As with any illness, there are frequent ups and downs over the course,” said Trump’s physician Sean Conley.

Conley said the president was flown to Walter Reed military medical center on Friday after a “rapid progression” of his illness, with his oxygen levels dropping worryingly low.

He received supplementary oxygen at the White House before being admitted.

Brian Garibaldi, another of Trump’s doctors, said the president had been “up and around” and was feeling well.

“Our plan for today is to have him eat and drink, be up out of bed as much as possible, to be mobile,” Garibaldi said.

“And, if he continues to look and feel as well as he does today, our hope is that we can plan a discharge as early as tomorrow to the White House where he can continue his treatment course.”

White House Chief of Staff Mark Meadows had said on Saturday that Trump’s health had left the doctors “very concerned” but that he had improved and there was never a risk he would have to hand over power.

Meadows’ comments to Fox News capped a day of back-and-forth in which conflicting reports about the president’s health created widespread confusion.

Late Saturday, Conley warned that Trump was “not yet out of the woods,” but that the medical team was “cautiously optimistic.”

The president posted a video to Twitter late Saturday appearing relaxed in an open-collar shirt and blue suit jacket, telling viewers he would be “back soon” — but acknowledging that the crucial coming days would be “the real test.” – AFP