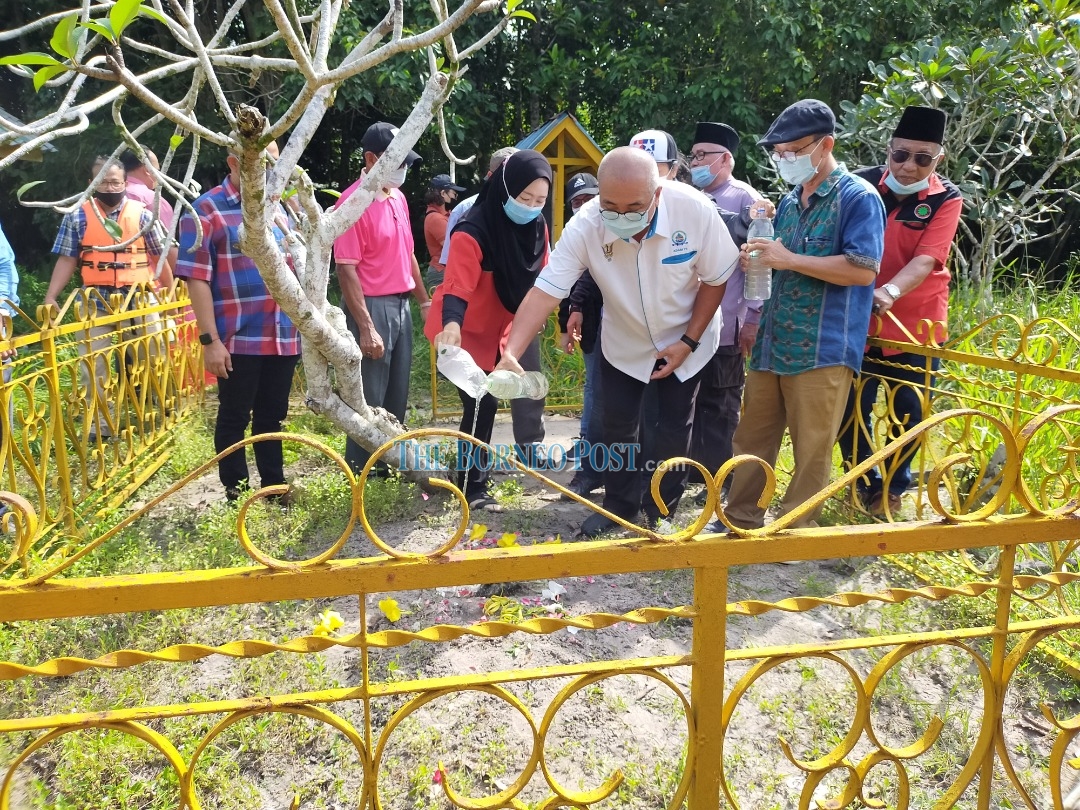 Yii (third right) pouring ‘air mawar’ on the Datuk Permaisuri’s grave during his visit this morning.

MIRI (Oct 7): The Miri City Council (MCC) will be reviving the 2004 plan to develop the over 100 years old Makam Permaisuri site into a park and a tourists spot, Mayor Adam Yii said.

He said the project estimated at RM5.7 million did not materialise when it was first proposed due to lack of funding.

“In 2004, Miri Municipal Council came up with a plan to develop, upgrade and beautify the place. At that time Miri was preparing to become a city by 2005.

“But the project did not take off per say. Tan Sri (Datuk) Peter Chin (former Miri MP and Minister of Plantation Industries and Commodities) had arranged some allocation to improve the wooden pavilion and the small bridge,” he said.

“At that time (2004), the project plan and drawings were all done. So now MCC is going to get it reorganised. We will review the project paper and then seek funding for the project.

“We will form the project’s task force that will include the Majlis Islam, local community leaders and also NGO (non-governmental organisations) which have been active in preserving and promoting this place,” he said.

Yii added that the task force would look into ways to implement the project, while the council prepared the project paper and sought funding for it.

“Datuk Permaisuri is a legendary figure in the history of Miri. There are a few versions of the legend, but in any case, it is historical.

“We hope that with the successful implementation of the project, this location will become one of the touristic and historical sites for visitors coming here, as well as an additional attraction for Miri. We will work towards that objective,” Yii pointed out.

Datuk Permaisuri, said to be a member of the Johor royal family which had close ties with the Brunei sultanate, is buried at the site.

According to a local legend, a ship carrying the Datuk Permaisuri, her husband and her in-laws encountered bad weather and sunk off the coast of Miri. She was rescued by local villagers and decided to spend the rest of her life here.