Wednesday, February 8
You are at:Home»News»Intellectual property of Bunga Ta’ang filed for protection, says State Secretary
For the freshest news, join The Borneo Post's Telegram Channel and The Borneo Post on Newswav. 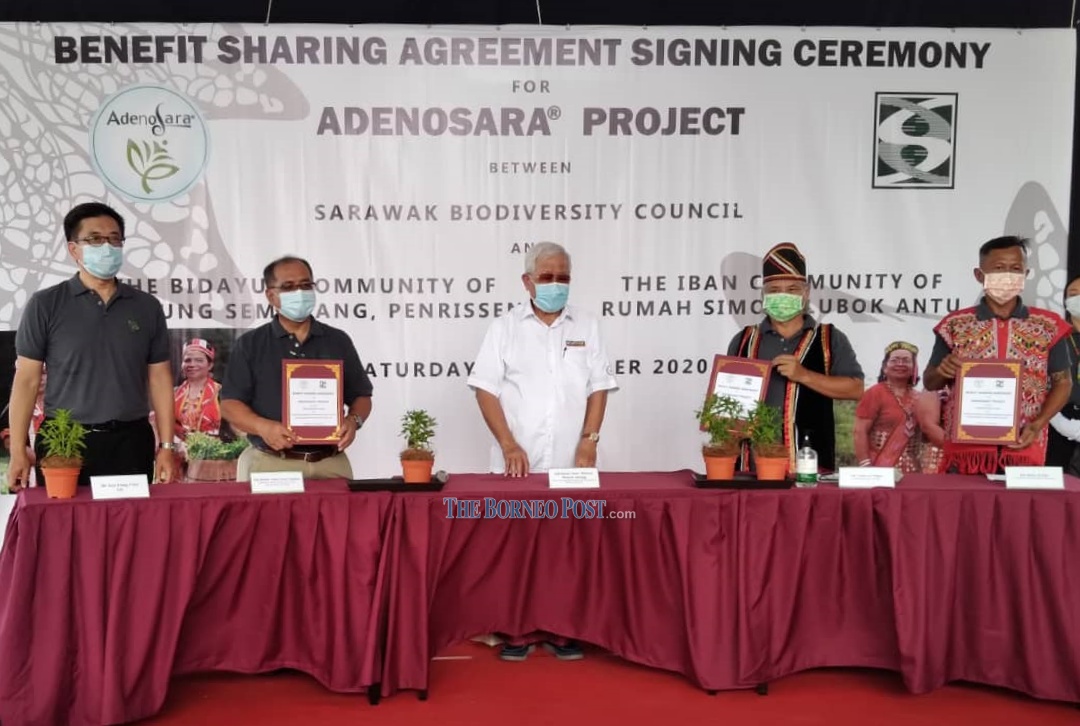 Manyin (centre), Jaul (second left), flanked by (from left) Yeo, Austin and Simon with the document after the signing ceremony.

He said that the essential oil that could be derived from the plant had been trademarked as AdenoSara®️ while the Geographical Indication registration for the plant was known as Sarawak Adenosma.

Jaul said that the plant, which is called Bunga Ta’ang by the Bidayuh community and Bangkit Engkerawan by the Iban community, is a wild herb.

“It seems that the population found in Sarawak is uniquely different in essential oil composition as compared to other countries.

“Most importantly, this Intellectual Property will be commercialised with the communities who are our partners,” he said at the AdenoSara®️ benefit sharing agreement signing ceremony at Kampung Semadang here yesterday.

Jaul said the Sarawak Biodiversity Centre (SBC) laboratory tests and data have shown that AdenoSara®️ has anti-bacterial and anti-fungal properties, which makes AdenoSara®️ a potential candidate for the development of oral care and hygiene products such as mouthwash and hand sanitisers that are organic and natural.

He noted that in the community, Adenosma was known for its natural repellency, thus it could be developed into animal care products that has huge market industry.

He believed that the unique scent, antimicrobial properties and its natural repellency could make AdenoSara®️ a multi-purpose ingredient for the development and innovation of products for both human and animal healthcare.

Jaul pointed out that the key ingredient of Adenosma was the essential oil which is distilled from the leaves and stem of the plant.

The plant exudes a strong aromatic scent similar to oregano which is described by a perfumists as “spicy”.

He said the major chemical composition of the essential oil is Carvacrol, which is widely used as fragrances for cosmetics and perfumes; flavouring agents in food industry; and green pesticides due to its insecticidal activities.

On the benefit sharing agreement, he said it empowers the communities to have a strong ownership in protecting their traditional knowledge and biological resources.

He said it signifies the commitment of SBC under its Traditional Knowledge Documentation Programme which is built on the foundation of mutual trust with indigenous communities of Sarawak.

“It is important that SBC work with our indigenous communities to keep in touch with the global development in biodiversity management and conservation.

“The benefit sharing agreement also marks the first step in moving towards commercialization of local resources and will pave the way for generating additional income in the rural communities to improve their livelihood,” he said.