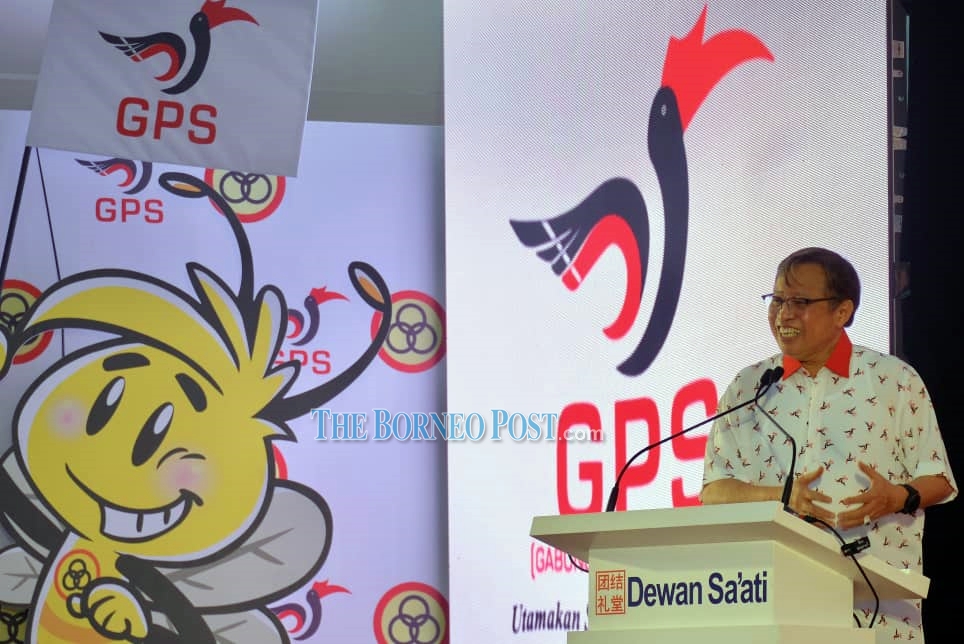 Abang Johari gestures during his keynote address at the closing ceremony. – Photo by Muhammad Rais Sanusi

The Gabungan Parti Sarawak (GPS) chairman said the state’s ruling coalition had given its support to the prime minster, but it seemed that the country’s top leadership crisis had not concluded.

“It is Covid-19 pandemic now and someone still wants to challenge the prime minister. The whole nation is in a chaotic situation, and (the welfare of) people must come first.

“For GPS, it is always people first, Sarawak First (GPS’ motto). Stability is important for us, we must have the common platform to develop in the midst of fighting Covid-19,” he said when closing the Sarawak United Peoples’ Party (SUPP) Special Convention 2020 at the SUPP headquarters here today.

Abang Johari said he was aware that some quarters had called for the GPS government to manage the Covid-19 crisis rather than having the 12th state election any time soon.

He said it did not mean that an election could not be called during the pandemic, adding that GPS would not mind not holding the election since it could go on ruling the state.

“However, GPS believes in the power being with the people,” he said, adding that the ruling coalition wanted the people of Sarawak to give it the mandate to continue governing the state.

He said Sarawak did not require any assistance from outsiders when it came to governance of the state.

He pointed out: “We do not need people outside Sarawak to come here. Sarawak is ruled by Sarawakians, we settle our own problems.”

On the timing of the next state election, which is due by mid-2021, the chief minister said he did not have a clue about when the 12th state polls would be held.

“People have been asking ‘When’s the (next state) election? I also don’t know,” he said, drawing laughter from SUPP leaders and members in the hall.

Abang Johari said the state government would continue to focus on nurturing the talents in Sarawak in line with the state’s objective of achieving the status of a developed state by 2030.

He said Sarawak would be in need of various talents to move forward despite being rich in natural resources and biodiversity.

“A lot of Sarawakians are working in Singapore, and it is a Sarawakian engineer who is behind the construction of barrage at Marina Bay Sands there.

“If our economy is good, this pool of experienced people will come back to Sarawak, so we have to upgrade Sarawak’s economy,” he added.

Previous ArticleFadillah: BDC flyover is safe for traffic use as no cracks observed
Next Article Khaled Nordin: Umno can make or break Perikatan, cautions Muhyiddin ‘radical changes’ are needed