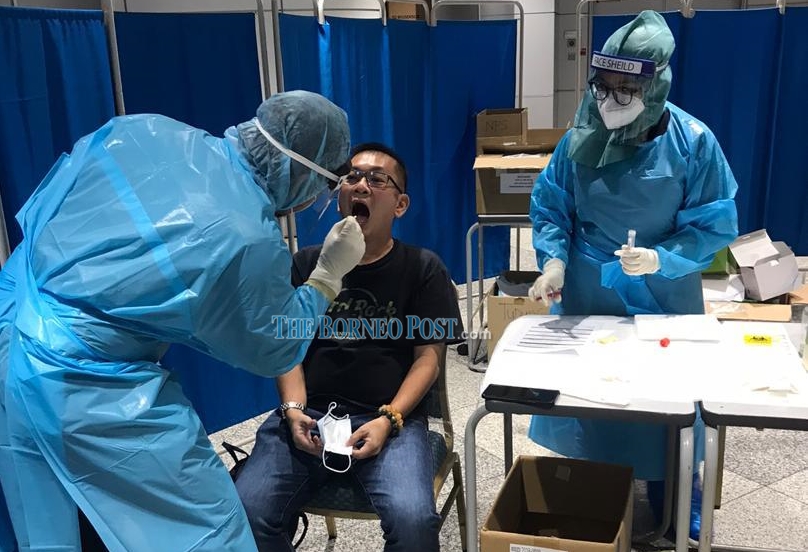 Chan taking a swab test upon arrival at KLIA on Oct 15 before attending Parliament sitting which will start on Nov 2.

KOTA KINABALU (Oct 20): Kota Kinabalu MP Chan Foong Hin has expressed his annoyance with former chief minister Tan Sri Musa Aman’s “open letter to the people of Malaysia”, whereby the latter had absolved himself of any blame for causing the latest wave of Covid-19 cases in Sabah.

“It is annoying to read the statement issued, as Tan Sri Musa Aman was the one who had attempted a coup on the previous Warisan-led Sabah state government,” the DAP lawmaker said today.

In the open letter which was widely published by the mainstream media, Musa blamed the then-Chief Minister, Datuk Seri Mohd Shafie Apdal, for calling a state election rather than “handing back” the government to him.

Saying that Musa’s statement was totally “uncalled for”, Chan questioned why Musa had decided to make such a statement especially when the people are struggling with more than 800 Covid-19 positive cases a day over the past three days?

“Isn’t it a clear case of shirking of responsibilities by Gabungan Rakyat Sabah (GRS)? This is not the time for politicking and that Musa Aman’s denial of liability right now is absolutely not welcomed. (It) is an afterthought and does not help in reducing the impact of Covid-19.

“He should take a leaf from another former Sabah Chief Minister Datuk Seri Salleh Said Keruak who had yesterday reminded politicians to focus at tackling the impact of the Covid-19 pandemic instead of engaging in self-serving politicking,” he said.

Chan added what Salleh said was true, that the people are starting to see politicians as being greedy and selfish.

“What Musa Aman and other GRS leaders should do right now is to start working and not to play up the blame game.

“Instead, they should urge the federal government to expedite the gazetting process for the RM45 billion Covid-19 bill which has been passed in Parliament almost two months ago back in August, so that the funds could be put to good use right now in acquiring and procuring the relevant medical equipment such as beds, ventilators, test kits  to treat Covid-19 positive patients,” he said.

On Aug 25, the Malaysian Parliament had passed the Temporary Measures for Government Financing (Coronavirus Disease 2019) (Covid-19) Bill 2020 to set up a Covid-19 fund in which RM45 billion had been approved.

According to Chan, the MPs from Pakatan Harapan (PH), including himself, felt that the allocation of RM45 billion was insufficient to deal with the impact of Covid-19.

They had suggested a sum of RM90 billion instead, he added.

“However, the Perikatan Nasional (PN) federal government had then been rather adamant with the RM45 billion sum being sufficient and had refused to even consider the RM90 billion proposal by PH Members of Parliament.

“But now, the Ministry of Health (MOH) is struggling with a severe lack of funding. Not only the Malaysian Medical Association (MMA) issued a statement on Oct 18 urging the federal government to release emergency funds in order to manage the worsening Covid-19 situation in Sabah, the MOH had to also reactivate its special Covid-19 fund to solicit donations from the public and offering tax reliefs for the same.

“It’s really alarming for the Sabah public health care system that, the occupancy rate of 1,018 beds across nine Covid-19 hospitals in Sabah had reached 71 per cent, and that 72 per cent of the Intensive Care Unit (ICU) beds in the state’s public hospitals were in use.

“There were positive cases in Kinarut but who have been left at home for two days before being taken to the hospital for treatment,” he said.

Chan said this kind of delay, which is mainly attributed to the lack of resources, is unacceptable.

He therefore urged the federal government to speed up the gazetting of the Covid-19 funding bill and to release the funds urgently to the MOH to enable the ministry to deal with the increasing Covid-19 patients at public hospitals in Sabah.