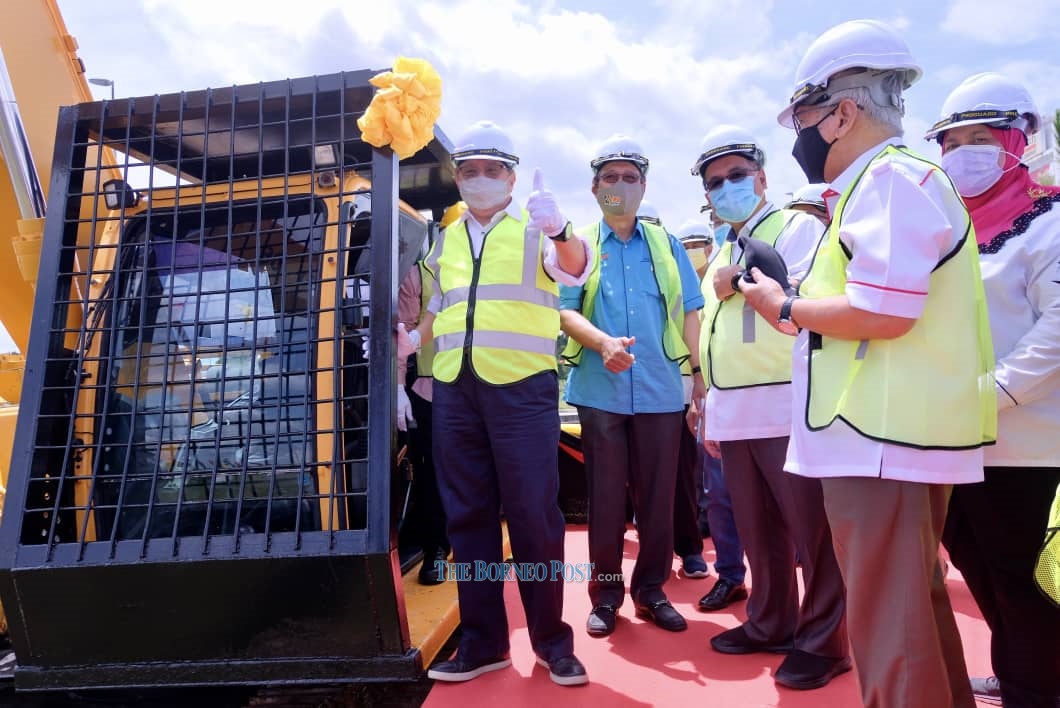 Abang Johari (left), Julaihi and others after the earth breaking ceremony. – Photo by Muhd Rais Sanusi

The proposed expressway, he noted, is now being designed.

“The Samarahan Expressway is an alternative road bypassing the Kuching Business District and connecting Santubong to Samarahan.

“Once completed, those from Petra Jaya can go to Kota Samarahan using the alternative expressway – they don’t have to go through Kuching,” he said after the earth breaking ceremony for the upgrading of five roundabouts along the Kuching-Samarahan Expressway here today.

Abang Johari said the alternative route was necessary in view of the fact that the coastal road would be completed within the next three years.

He noted that the new Samarahan Expressway would be connected to Kuching through the bridge.

“The bridge will cross the Sarawak River somewhere near Sejingkat and from there it will be linked to Santubong through Jalan Sultan Tengah.

“That road that will be built is a dual carriageway, which then will become the entrance to the tourism area in Santubong and Damai,” he said.

The chief minister said through the federal highway, it would be connected to Lundu and Samatan.

He said for Kuching side, the state government would upgrade the road to Bau into a dual carriageway.

He said in fact the whole of Kuching would be connected with dual carriage way, which would also facilitate foreign investors to establish their operation with the central business district of Kuching City.

“By having dual carriage way connectivity the mobility also will be faster and people don’t have to buy houses.

“Our population will be spread out and our City will be planned properly into administration, business and industrial operation centre.

“With the completion of the new dual carriageways, Kuching will not be congested and then we can preserve Kuching as a well planned city,” Abang Johari said.

On the upgrading of five roundabouts, Abang Johari said the groundbreaking ceremony today was one of the initiatives of the Sarawak government in ensuring a short-term plan to overcome the problem of road congestion in Kuching and Samarahan was realised.

The cost of the project is about RM47.3 million, which is fully funded by the State Government, and is expected to be completed by January 14, 2022.