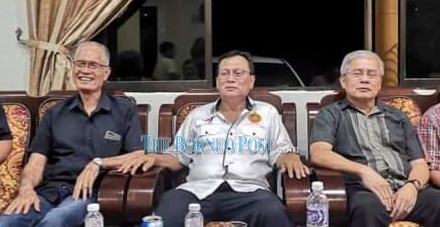 KUCHING (Oct 31): Betong Resident Friday Belik, 62, said that he has accepted Progressive Democratic Party’s (PDP) endorsement to be its nominee for Krian in the next state election.

“I have given it a thought and accepted it,” Friday said when contacted by The Borneo Post for a reaction to a video showing PDP vice president Rolland Duat declaring him as PDP’s Krian nominee for the next state election.

Friday said he was at his longhouse Rumah Abing when PDP vice president Rolland Duat called him to come over to the nearby longhouse in Sungai Brangan.

“I was indeed at the scene where YB Rolland spoke of me. I was at home when he called me to come over to Sungai Brangan. I cannot say I am unhappy with the video. All I can say is that PDP has endorsed me as its candidate in Krian,” he said.

He said Rolland, who is also Meluan assemblyman, happened to be visiting friends at the longhouse when he was asked to speak.

Friday took over from Datu Rommie Daniel as Betong Resident in 2017. His current contract with the government expires in May 2021.

In the video, Rolland was seen informing longhouse folks what had transpired or approved in the last PDP supreme council meeting on Monday (Oct 26) and this include endorsing him as PDP nominee for Krian.

The video has gone viral since Thursday night (Oct 29).

PDP is a component of the state ruling coalition Gabungan Parti Sarawak (GPS) which had quit the Barisan Nasional fold weeks after it (BN) lost federal power to Perikatan Nasional (PN) coalition following the 2018 general election.