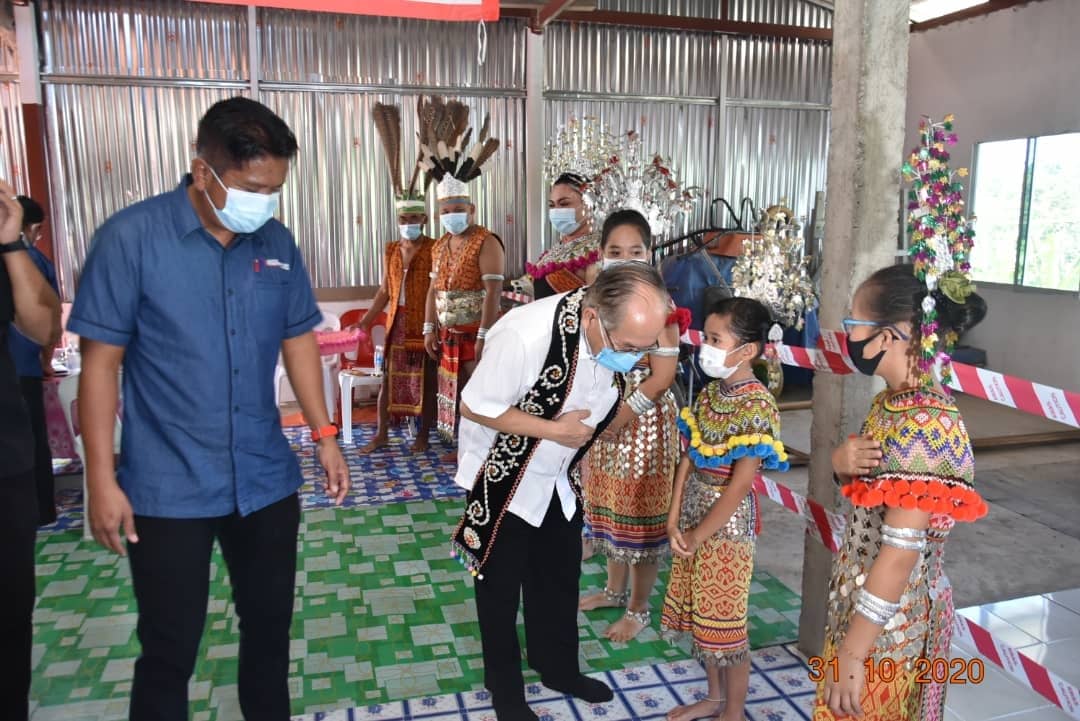 Uggah (second left) exchanging pleasanties with young girls in traditional costumes awaiting his arrival at Rh Lidi Busok. Aziz is on his left.

In his speech when officiating a programme at Rh Lidi Busok, Ulu Babu in Betong, Uggah, who is also Sarawak Disaster Management Committee (SDMC) chairman, said Sarawak had recorded zero or single digit cases daily prior to the polls.

“But then this month we saw our cases start to increase after the Sabah state polls.

“We had people coming back to the state then and now about 60 per cent of our positive cases are imported cases,” he said.

As such, Uggah said the fight against the Covid -19 pandemic in the state still needs the unconditional collaboration and support of everyone.

He believes the transmission of the virus can be kept under control when all continue to dutifully comply with all the standard operating procedures (SOP) laid out.

For rural areas, Uggah said all community leaders must play their parts in providing the leadership in the fight against Covid-19.

“They must insist that all the SOPs especially on social distancing, avoiding large gatherings and frequent washing of hands are observed in their respective villages and longhouses.

“It is a positive sign that some of them still do not welcome outsiders or visitors to their longhouses and villages,” he said.

Meanwhile, the programme officiated by Uggah was the Sepakat@ Komuniti programme organised by the Information Department.

This statewide programme focusses on creating awareness among the people on the need for them to continue co-operating with the government in stopping the spread of Covid-19.

Uggah again reminded those from outside the Kuching district not to travel to the district which is now a red zone area if they had no urgent business to attend to there.

“By the same token, I hope those in Kuching district will refrain travelling to other districts for now,” he said.

He gave assurance that the SDMC would continue to closely monitor the situation in the state.

Later in a message recording session with the department media unit, Uggah said the proliferation of fake news in the social media is a major challenge for SDMC.

“People are getting confused and unduly worried. This makes our job harder.

“At the onset, it was equally challenging too, to get all government departments and agencies at both state and federal levels and most importantly the people themselves, move as one in the fight.

“We had to ensure the Health Department as the leading agency, have enough frontliner staffs and facilities, in particular the Personal Protective Equipment(PPE). Fortunately, we have been able to achieve all of these.”