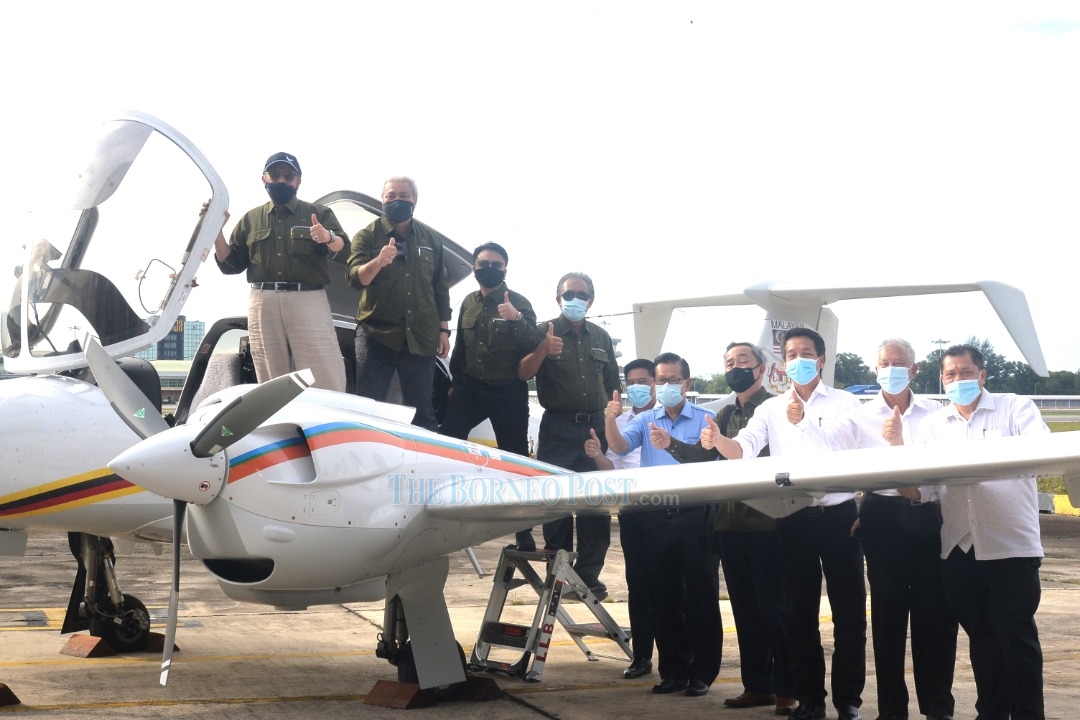 (From left) Abang Johari, Awang Tengah and others give the thumbs up after launching the Sarawak Aerial Detection Unit (SADU) at Hornbill Skyways in Miri today. – Photo by Penerangan

MIRI (Nov 4): The Sarawak Forest Department’s ground-breaking Systems Application and Development Unit has been rebranded as the Sarawak Aerial Detection Unit (Sadu) in line with its growing expertise and role in managing the country’s natural resources.

Chief Minister Datuk Patinggi Abang Johari Tun Openg said at the launching of Sadu today that the department was the first in Malaysia to operate using hyperspectral remote sensing technology for the monitoring and management of natural resources.

“Sarawak is in the forefront. This is in line with the vision and mission of the State Government which is to be a world class civil service as well as contributing to the digital government initiative,” he said.

Abang Johari pointed out that Sadu was established in 2008 to develop applications based on hyperspectral and geospatial technology for research use by the Forest Department but they could now also be used by other government agencies in other parts of the country.

“In 2014, Sadu was given the mandate by the state government to assist in combating illegal logging activities in Sarawak until now. This was the starting point for Sadu to move to the next phase based on the expertise and experience of this unit in advanced technology,” said Abang Johari.

He added that Sadu was given an allocation under the 11th Malaysia Plan by the Energy and Natural Resources Ministry to implement a project to produce a system that could perform mapping and air monitoring missions.

Abang Johari said the implementation of the project was very significant as the sharing of assets, expertise and resources was expanded nationwide.

“This involves the development of a customized airborne system equipped with mission equipment based on mission requirements such as monitoring and mapping of natural resource areas,” he said.

He pointed that the Forest Department had also trained its manpower from 2016 to 2019 and established a special technical work team that could handle hyperspectral technology for the air mission in terms of operations as well as production of final information to end-users.

Apart from being used in air enforcement missions and management of the country’s natural resources, Sadu provides assistance in terms of geospatial information in the event of natural disasters such as floods, forest fires, national border monitoring and other missions to other government agencies in Sarawak, Sabah and Peninsular Malaysia.