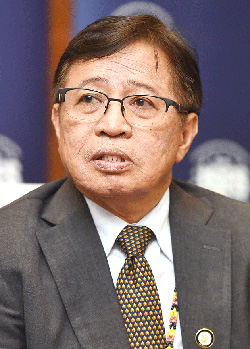 However, he said the proportion of development expenditure in the budget for next year will be slightly reduced compared to last year’s budget as the government is handing out more financial assistance such as the Sarawakku Sayang Special Assistance (BKSS) to the people due to Covid-19 pandemic.

“More details will be known tomorrow (Monday) after the state budget is tabled during the DUN sitting.

“The development expenditure could constitute slightly over 60 per cent of the overall budget,” he said during a press conference held at the headquarters of Parti Pesaka Bumiputerea Bersatu (PBB) here yesterday.

On a separate matter, the chief minister said the state government was grateful for being allocated RM4.5 billion in development expenditure in the national budget, as the federal government had to balance the allocation for the country’s development and operation expenditure to look after the welfare of the people impacted by Covid-19.

“We look at the national budget as a whole and the development side was accounted for not more than 20 per cent of the overall expenditure.

“And to be fair, the federal government already had to roll out various types of assistance to the small and medium enterprises (SME) and the bottom income 40 per cent (B40) group,” he said.

On top of the development expenditure, Abang Johari said Sarawak receives funds from various federal ministries such as the Entrepreneur Development and Cooperatives Ministry, Education Ministry, Domestic Trade and Consumer Affairs Ministry, and the Women, Family and Community Development Ministry.

He stressed that the state government was ‘perfectly fine’ with being allocated RM4.5 billion in development expenditure as the people’s interest should be the ultimate priority for now.

“Currently, we have billions of ringgit of projects ongoing and they are not being cancelled as what happened during the previous federal administration.

“Besides, we also have to look at our existing capacity in implementing projects. We are already short of 5,600 workers in the state due to travel restrictions.”

He said that overall, the people should appreciate that the federal government had prepared the biggest budget in county’s history to assist in the recovery of the economy which has been hard-hit by Covid-19.