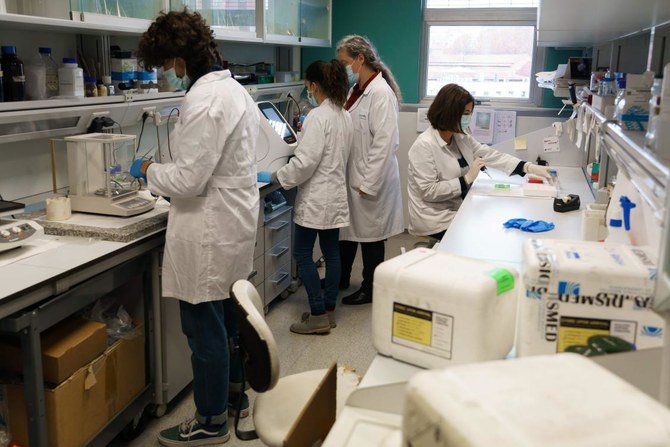 Researchers at the Institute of Molecular Biology and Genetics (IBGM) of the University of Valladolid (UVa) work on searching a vaccine against COVID-19, at a laboratory in Valladolid on November 10, 2020. AFP Photo

STOCKHOLM: The first vaccinations in the European Union against Covid-19 could happen in the first three months of 2021 under an optimistic scenario, the EU health agency chief told AFP on Wednesday.

“I think optimistically first quarter next year, but I can’t be more precise,” Andrea Ammon, the director of the Stockholm-based European Center for Disease Prevention and Control (ECDC), said in an interview.

A European source told AFP on Tuesday that a vaccine could be authorized for use in the EU in “early 2021,” after the announcement that US pharmaceutical group Pfizer and Germany’s BioNTech’s vaccine had shown 90 percent effectiveness in phase three trials.

“Of course it’s promising,” said Ammon, stressing that so far it is a “press release and not yet a (scientific) peer review, so we have to see what the final assessment will be.”

For any vaccine to be available within the European Union, it has to receive authorization from the European Medicines Agency.

The European Commission said Wednesday it had signed a contract with Pfizer and BioNTech to buy 300 million doses of their vaccine.

Ammon said the pandemic’s spread in Europe was “very, very concerning” and all indicators were “going in the wrong direction right now.”

Since the beginning of the outbreak, Europe has suffered at least 311,000 deaths from more than 13 million infections, and many countries have been hit by a second wave.

Ammon suggested “it could be that it takes longer to bring the cases down from where we are right now” than it did in March and April when cases peaked during the first wave in Europe.

She urged Europeans to respect their countries’ restrictions and measures to curb the spread of the virus, “as hard as it may be.”

“They have to understand that it’s very crucial that they are contributing to the success of the control of the epidemic by complying with these measures.”

EU Health Commissioner Stella Kyriakides reiterated on Wednesday that a vaccine would not put an immediate end to the pandemic.

“We need to understand that even when we have a safe and effective vaccine this will not be a silver bullet that will make Covid-19 disappear overnight,” she told reporters.

“Even when a safe and effective vaccine is … available there will be a need to continue with these measures until we’re able to reach a significant part of the population,” she said. — AFP