Wednesday, December 2
You are at:Home»Features»Volunteers step up in fight against Covid-19

THE world is reeling from the throes of an unprecedented public health crisis as the still uncontained highly contagious Covid-19 continues to cast a long ominous shadow on humanity.

This virulent health scourge is one of most, if not the most, severe public health emergencies to have ravaged the world.

The pandemic of epic proportions has left economies severely damaged and over 1.2 million deaths in its wake as medical science struggles with the task of finding a vaccine — hopefully soon.

But deadly as it is, Covid-19 has, in a quirky way, galvanised people towards humanitarianism with hordes of volunteers rising to the role of good Samaritans in a pandemic-gripped environment.

In Miri, for example, three voluntary groups — #sew4frontlinersmiri, SewFaceMask4B40kids, and Persatuan Kebajikan Mutiara Prihatin (V-Care4U) — were set up following the outbreak. They all have similar goals — helping front-liners and the stricken as part of global efforts to fight the disease.

V-Care4U, in particular, was formed and officially registered on Nov 11, 2020, as a charitable and non-governmental organisation (NGO) with the immediate focus on sewing face masks to help poor children and students of B40 families.

V-Care4U’s goals include helping the needy in all possible ways by working with government and private agencies and the public, and through fostering close cooperation in the community.

Membership is open to Sarawakians aged 18 and above. 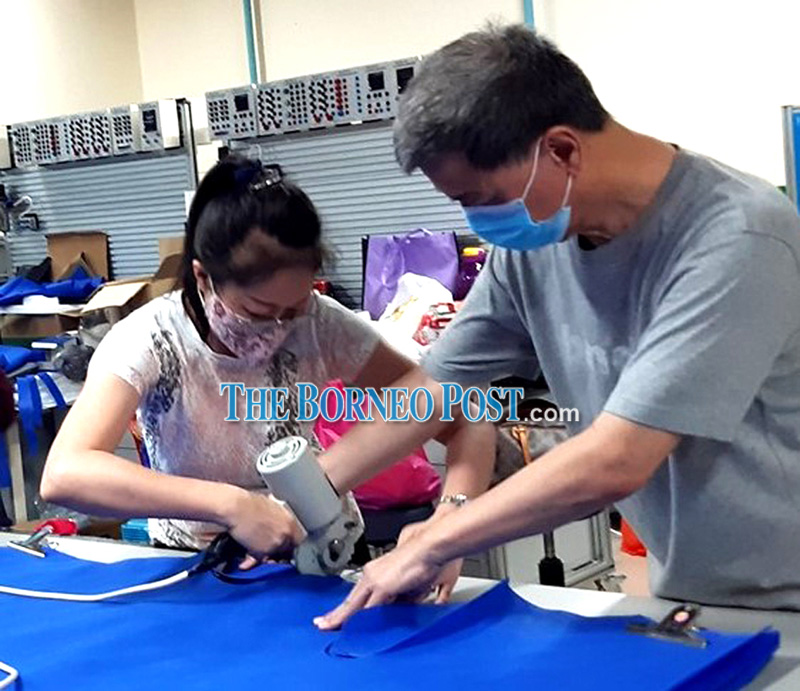 V-Care4U founding chairman Teo Yen Luan, 48, and her mother Bong Shook Ngo, 75, are well-known seamstresses in Miri — an occupation they have held for 30 years.

Teo was an almost total stranger to volunteerism before Covid-19.

“I’ve never done any major voluntary work prior to this. The  pandemic is a wake-up call to not only me but also seven other family members.

“My sister, Dr Teo Shu Ching, is directly involved in handling Covid-19 patients at the Sarawak General Hospital in Kuching,” she told thesundaypost.

V-Care4U’s first project was sewing 3,000 pieces of face masks, which were distributed for free to mostly rural schools in Miri for children or students under the B40 category.

“Our present 30 pioneering members started the project in August and thanks to them and also the sponsors, including two elected representatives, we were able to complete the project and help the B40 group.”

She said their next project would be sewing personal protective equipment (PPE) for front-liners besides face masks for needy students.

“We’ll continue to work closely with other NGOs or any establishments interested in charitable projects,” she said.

Volunteers help to produce PPE at the community college.

V-Care4U co-founder and deputy chairman Jamila Abdul Basah is no stranger to volunteerism.

The 66-year-old said the need to fight Covid-19 prompted her to team up with Teo and others to set up V-Care4U. 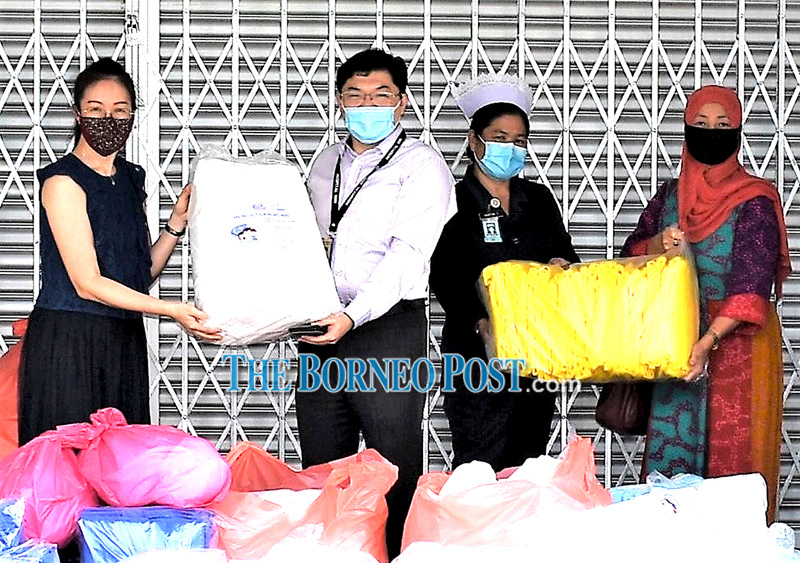 Dr Wong (second left) receives PPE from Teo, while Srimurniyati Cranfield (right) and a volunteer hold up a packet of yellow isolation gowns.

Over the years, she has been involved in many NGOs, doing voluntary work in various areas — from environmental conservation, women’s rights, and retiring teachers’ welfare to palliative care through associations such as PCAM, MNS, GWPN, and PCMNPS.

She heads the education bureau in V-Care4U to leverage on her 38 years’ experience as a teacher and former headmistress and on her sewing skills to give back to the community during the pandemic and beyond.

Education is one of the four bureaus of V-Care4u. The others are welfare, sewing, and donation.

Jamila and Teo were both volunteers for #sew4frontlinersmiri, set up in March this year.

Teo and fellow seamstress Nor Azlina Samin, along with Norlela Abdul Ghani of Ikram Miri co-founded this volunteer group, which has 200 members. 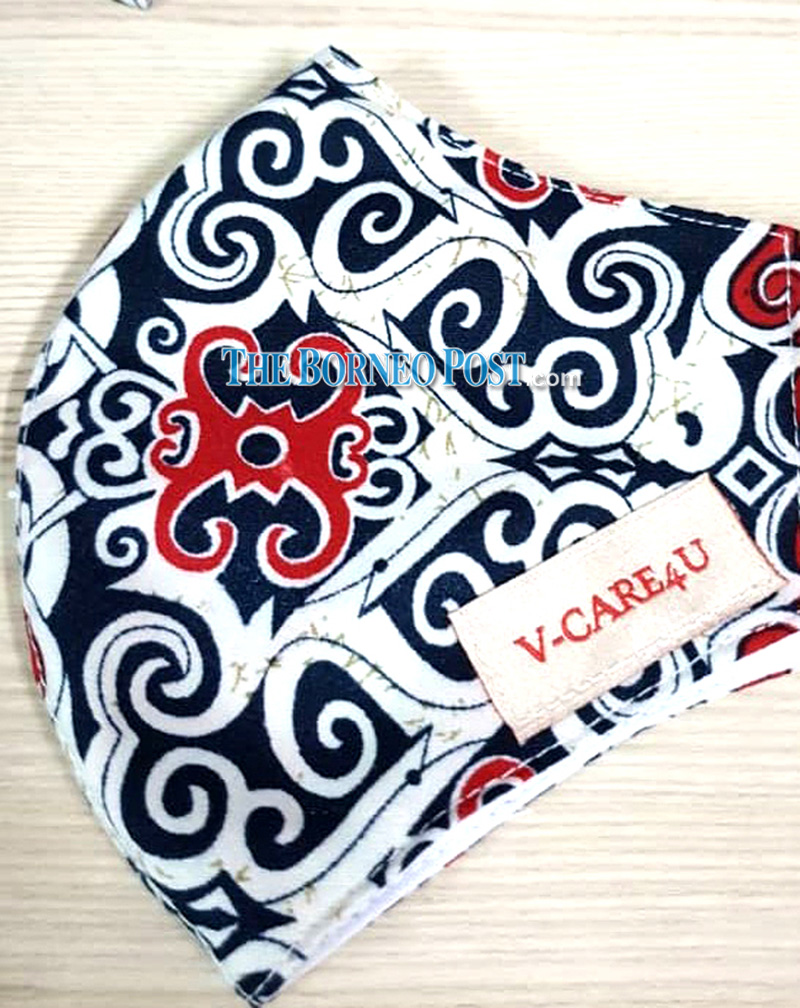 Kuala Lumpur native Geena has been an active volunteer since her school days and Covid-19 ignited her passion to reach out to the community.

“For me, volunteerism is a way of life. I hope for nothing in return but just to help the needy at this trying time.

“I take this opportunity through thesundaypost to thank all the sponsors and volunteers, including 20 inmates of Miri Central Prison, students, housewives, and working adults for their cooperation and help,” said the 48-year-old, who has been living in Miri for eight years.

PPE covers protective clothing, helmets, gloves, face shields, goggles, face masks, and/or respirators or other equipment, designed to protect the wearers and prevent the spread of infections by diseases like Covid-19.

Presently, Geena and 17 other volunteers through their newly-formed group — SewFaceMask4B40kids — are providing 1,900 pieces of disposable face masks to 543 needy students from seven primary schools in Miri.

The donations were made possible by a sponsor from Peninsular Malaysia and Ikram. 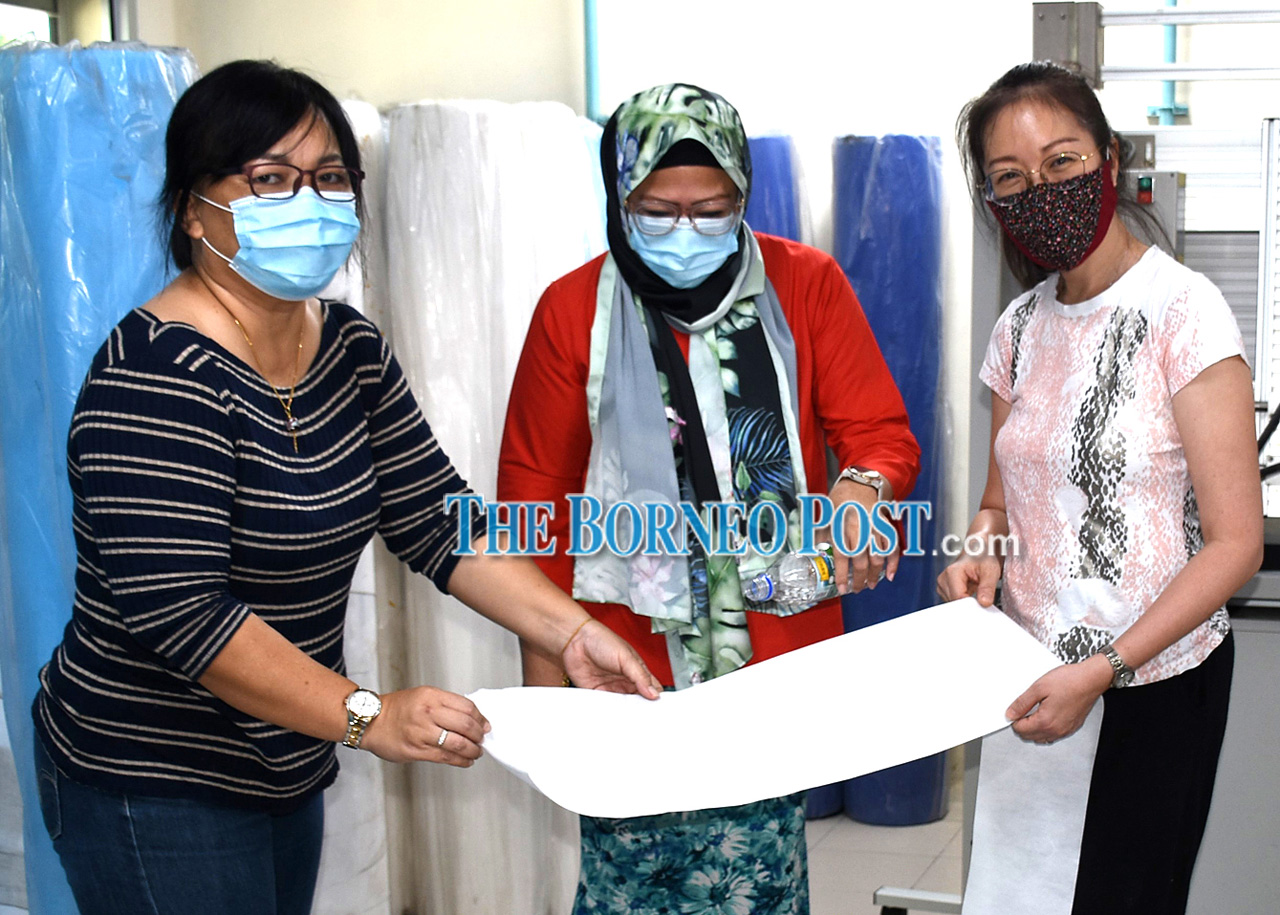 (From right) Teo, Azlina, and Romina test the ability of material to prevent seepage of liquids.

Miri Hospital has received the most PPE, produced by #sew4frontlinersmiri. So far, over 6,000 pieces have been donated with the third and biggest batch of 3,770 pieces handed over to hospital director Dr Jack Wong on June 28.

“We’re very blessed to have a very supportive Miri community helping us to fight Covid-19, including #sew4frontlinersmiri,” Dr Wong acknowledged. 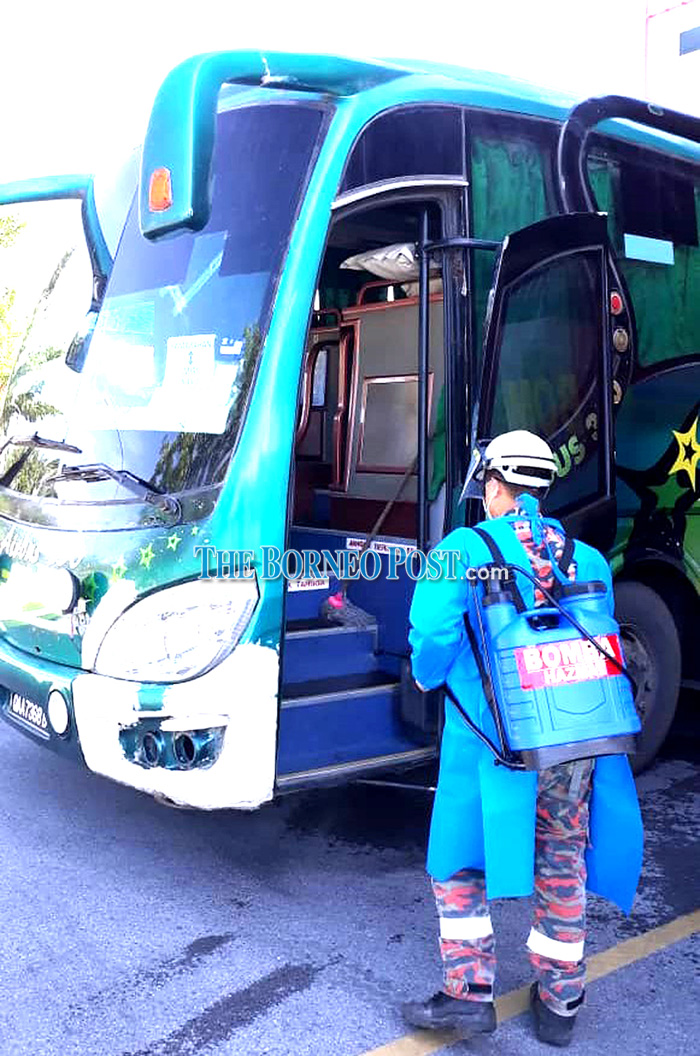 A firefighter wears an isolation gown donated by #sew4frontlinersmiri while sanitising a public bus.

“A million thanks to all, including the volunteers of #sew4frontlinersmiri and the sponsors. For PPE alone, Bomba has saved some RM20,000. The equipment were donated for our use, especially in sanitising schools, public areas, and government buildings.”

According to Law, a set of PPE costs around RM30.

Those locally produced were of top quality, which could be cleaned and reused about five times compared to single-use plastic aprons, he added.