Saturday, April 17
You are at:Home»Columns»Netflix’s ‘The Crown’ is a triumph of primetime television 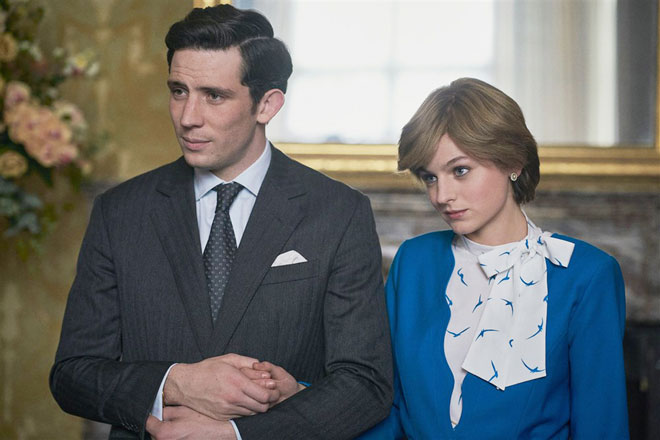 O’Connor and Corrin are seen as Charles and Diana. — Netflix photo

NETFLIX, the hugely successful cable paid-for primetime network, has just launched the latest in an expected eventual six seasons of ‘The Crown’ by releasing its 10-parter Season 4 on Nov 15.

I have just finished watching the 10-hour long season after a three-night marathon binge-watch and was completely enthralled and overwhelmed by its overall production values, story-writing, acting, and — most of all — its splendid and very expensive sets and locations (as typical of all its seasons thus far).

My review will include spoilers, so if you haven’t seen it but intend to, you should stop reading now. But as the plot and screenplay are based on real and actual historical events, you may also be already in the know if you are fluent in the history of the British monarchy and that of major world events, so it won’t really be ‘spoilers’ as such but the film producer’s specific slant and treatments of their overall narrative of the screenplay.

To be fair, the only shocking and surprising turn of events that was revealed to me personally had occurred only in chapter 7, with a very little known hidden family ‘deep dark secret’. On research it is historically correct and was probably included as part of what the producers had always planned all along — a great big revelation in every season which is not general knowledge for most monarchists in the modern era; it has its very own built-in shock value to further whet the appetite of the viewer’s interest to an even higher level.

Season 4 of ‘The Crown’ covers the years 1977 to 1990. It is set in England during Margaret Thatcher’s prime ministership and introduces Lady Diana Spencer, Prince William, and Prince Harry. Events depicted include the royal wedding of Charles and Diana, their 1983 royal tour of Australia and New Zealand, the war in the Falklands, and the beginning and the start of the end of Charles and Diana’s relationship — the ‘real insider leaks’ as seen by members of the royal family.

The casting of the ensemble actors of ‘The Crown’ is impressive and their acting is top-notch and excellent: I must single out Olivia Colman as Queen Elizabeth II (although my favourite actress is this role is still the superlative Claire Foy in Season 1 and 2); Tobias Menzies as Prince Philip; Josh O’Connor as Prince Charles; Helena Bonham Carter as Princess Margaret; and for this season only the introduction of Gillian Anderson superbly in the role of Margaret Thatcher and newcomer Emma Corrin as Princess Diana.

The screenplay is slick and well executed and the production values rival those of major epic feature film productions.

Locations and sets, costumes and set dressings too would have cost a pretty penny. It has been estimated that a single episode cost between a low of US$6.5 million (RM27 million at today’s rate of RM4.1 = US$1) to a high of US$13 million (RM53 million). By the time they finish the six-season series, they would have spent in the region of between US$390 million to US$780 million over a period of six years making the entire ‘The Crown’ TV series.

The spectacle, the splendour and the costly sets, locations and costumes are all right up there on screen for all to see — as someone in the industry I can only guess at how much the cost of extras and the catering would have been. Not to mention the cost of logistics and expenses of obtaining official approvals to shoot at certain locations and public spaces! A small fortune indeed would also have gone into special effects as well as costumes and rental of appropriate period pieces of show vehicles, picture cars, and special clearances to shoot on location at historical sites.

Although ‘The Crown’ boasts of no big action sequences or big major A-list Hollywood stars, yet its overall production costs rival those of say a major hit series like ‘Games of Thrones’. Where did the money go?

It’s sheer attention to every minute detail. All its costumes, sets, and locations are perfect and historically correct. The entire production was well shot with excellent cinematography, gorgeous musical score, and the best ensemble acting of a group of extremely talented actors who had complemented one another instead of anyone standing out and stealing a scene. Neither the Queen, Princess Diana, nor Thatcher — all played by superb actors — did that.

For readers who haven’t watched a single episode of this series ‘The Crown’ so far, let me quickly recap what it is all about.

‘The Crown’ portrays the life of Britain’s Queen Elizabeth II from her wedding in 1947 until the early 21st century. Award-winning actress Claire Foy portrays QE2 in Seasons 1 and 2, Olivia Colman in Seasons 3 and 4, and Imelda Staunton will portray her in Seasons 5 and 6. Season 1 depicts events up to 1955; Season 2 takes it up from there till 1964; Season 3 covers 1964 to 1977. Season 4 covers the period from 1977 to 1990; and the final two seasons will take it up to present day British monarchy in 2020.

The entire series follows QE2 as the central figure whose role as the constitutional monarch of Great Britain and head of the 48-nation Commonwealth has in her personal and official capacity influenced life within the royal circles and in international affairs for a period spanning from the year of her ascension to the throne in 1953 to present day — a period of 67 years, the longest reigning monarch in history! (On Sept 9, 2015 she surpassed her great, great grandmother Victoria by becoming the longest reigning monarch in history.)

‘The Crown’ Season 4 has had an incredibly positive critical response — the industry’s bible for critics, Rotten Tomatoes reported a 96 per cent approval rating based on 75 reviews so far. On Metacritic, Season 4 holds a score of 85 out of 100 based on 25 critics, thus indicating ‘universal acclaim’.

Some critical comments had included:

“Whatever historical liberties ‘The Crown’ S4 takes are easily forgiven thanks to the sheer power of its performances — particularly Gillian Anderson’s imposing take on The Iron Lady and newcomer Emma Corrin’s embodiment of a young Princess Diana.”

Writing in ‘The Atlantic’, Shirley Li describes the drama as “sharper than ever” and “splashy”, and observes that in contrast to the first three seasons the fourth has criticised the Queen for her  “ignorance” and “stubborn devotion to tradition”.

However, the naysayers among the critics had slammed “the substantially tweaked timelines”, “the ‘sub-standard soap opera plot”, and “reality hijacked as propaganda, and a cowardly abuse of artistic licence which fabricated history to suit its own preconceived narrative”.

What did the protagonists themselves feel?

‘The Crown’ Season 4 has received backlash from the British royal family and royal commentators. Royal historian Hugo Vickers stated, “In this particular series, every member of the royal family, in my view, comes out of it badly, except the Princess of Wales Diana. It’s totally one sided, it’s totally against Prince Charles and had portrayed the British royal family as ‘villains’ – The Crown’s royals are wild, cruel distortions of the people I’ve known for 40 years.”

In my humble opinion, it has thrown open the hitherto locked and secured doors of Buckingham Palace, Highgrove, and all the other royal residences to us, the man on the street, the curious onlooker, and the millions of followers of the British Royal family through the years — an intimate inside look into what royal life is all about — and it’s quite a revelation. What you make of it is really up to you. As for me? It’s simply great entertainment if you have 10 hours to spare to binge watch television programming at its very best.