Wednesday, December 2
You are at:Home»News»Nation»Braving scorching heat and rain in costume to earn a living 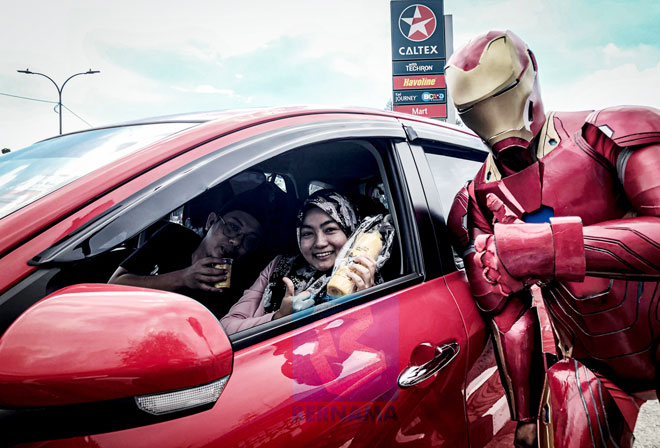 BUKIT MERTAJAM: Despite having to go through the more challenging twists and turns after being laid off in August due to the Covid-19 pandemic, life goes on for Muhammad Syukur Mohd Patthi as he has to find a way to earn a living.

That was when he decided to combine his experience in donning superhero costumes with selling creamy sweet corn juice at a roadside stall he set up with his friends, Yusri Md Saad, 35 and Mohamad Zaidi Zainal Abidin, 33, near Bandar Perda, Bukit Mertajam, for the past two weeks.

Muhammad Syukur, 26, said that it has been difficult for him to find a job and after trying several times and unsuccessful, he decided to start his own business by selling creamy sweet corn juice.

Previously working for a telecommunication company, Muhammad Syukur said he has been actively involved on part-time basis in a group called the Penang Superhero Gang (GSP), known for donning superhero costumes while entertaining children at birthdays and other celebrations.

“However, since the Covid-19 pandemic hit the country, all orders have been cancelled. Hence, we decide that selling sweet corn juice in costumes will make us unique and hopefully it will attract customers.

“Despite the scorching heat and sometimes rain while we are in our costumes, it is all worth it when people slow down to wave or honk at us. We also understand that following the implementation of the Movement Control Order (MCO), many have been missing the outdoors, and if by looking at us, they feel entertained, then I am very happy,” he said.

He said that when he first started the business, which coincided with the implementation of the Conditional Movement Control Order (CMCO) in all states in the Peninsula except Perlis, Pahang and Kelantan on Nov 9, he suffered losses of up to 80 per cent but thankfully now sales have stabilised.

During that period, majority of unsold drink were distributed to frontliners manning the roadblocks around Penang, he added.

He also said that customers can buy his sweet corn juice at RM8 per bottle, RM15 (for two bottles) and RM20 (three bottles) and he would also sell the juice at different locations to attract new customers. — Bernama