Thursday, July 7
You are at:Home»News»Sarawak»Rabies death toll in Sarawak climbs to 28 after 58-year-old man succumbs to virus 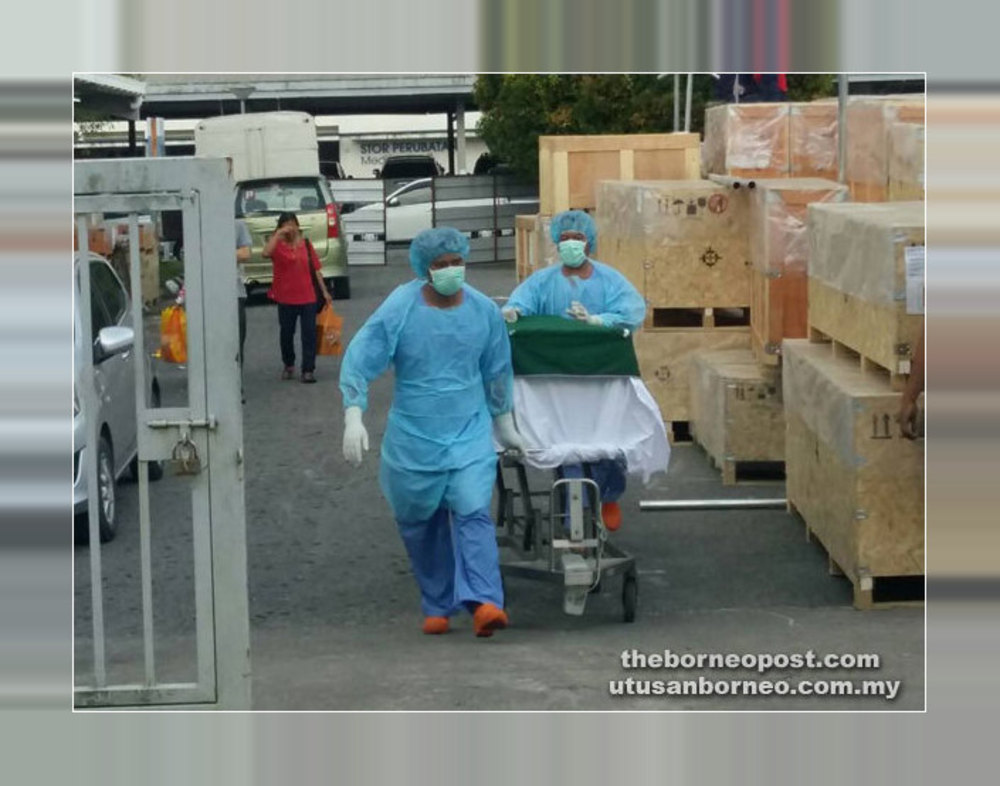 Medical personnel transporting the remains of a previous victim of rabies. The disease has claimed its 28th victim since the first outbreak in June 2017. File Photo

KUCHING (Dec 3): A 58-year-old man has been confirmed as the latest person to die of rabies in Sarawak this year, said Health director-general Tan Sri Dr Noor Hisham Abdullah today.

He also said another rabies case involving a three-year-old boy was still receiving treatment for the disease and was reported to be in stable condition.

“Only two cases are still alive, and both are children who received early treatment,” he said in a statement today.

On the latest fatality, Dr Noor Hisham said the deceased was admitted to the ward at Lundu Hospital on Nov 19 this year for three days following symptoms of body pain and weakness.

He said the victim had also complained of a sore throat with difficulty in eating and drinking, before being transferred to Sarawak General Hospital (SGH) on Nov 21 when his health condition worsened.

“He passed away on Nov 25, 2020 and was diagnosed with rabies meningoencephalitis. The diagnosis was confirmed by a rabies positive laboratory test by Institute of Medical Research (IMR) the same day.

“The deceased had a history of being bitten by a stray dog two years ago while hunting in the jungle, but he did not seek immediate treatment at any health facility.

“The case also took care of five dogs but these dogs have been confirmed negative for rabies by the Sarawak Veterinary Department,” said Dr Noor Hisham.

The death is the seventh fatality from rabies in Sarawak this year. The previous case involved a 16-year-old girl who died at the SGH on Nov 11 and confirmed to be infected with the rabies virus the next day.

On the other case involving a three-year-old boy who is still alive, Dr Noor Hisham said the case was bitten by a dog on the face on Nov 2 before being immediately admitted to Bau Hospital to receive rabies immunoglobulin (RIG) injection and an anti-rabies vaccine.

“The case was discharged in good health on Nov 6. However, on Nov 13 until 15, this child suffered high fever, weak limbs, poor appetite, restlessness, hydrophobia and showed aggressive behavior.

“The case was admitted to SGH on Nov 16 for further treatment and confirmed to be infected with the rabies virus through laboratory tests conducted by the IMR on Nov 25.

“The child is now receiving treatment at the SGH and in stable condition. We at the Ministry of Health (MoH) pray for his speedy recovery,” said Dr Noor Hisham.

According to him again, it was found that the child was bitten by a pet dog belonging to a neighbour while trying to save his grandmother’s cat which was attacked by the dog.

“This dog was caught by the Bau District Council on Nove 3 and confirmed positive for rabies virus on Nov 18,” he said.

Dr Noor Hisham said deaths from rabies can be avoided if preventive measures are taken such as immediately seeking treatment at a nearby health clinic or hospital if bitten by animal.

Those who are bitten by a dog or other animal must wash the bitten body parts with running water and soap for at least 15 minutes to remove the saliva, he said again.

“Make sure your pet dogs have received anti-rabies vaccination every year from the nearest animal clinic and avoid having your pets mixing together with other dogs or wild animals.

“If a pet dog or cat is found to have a sudden change in behavior, including becoming more aggressive, seek immediate treatment at a veterinary clinic and report to the nearest Veterinary Services Department. Also make a report to the local authority if there are stray dogs roaming in your area of ​​residence,” he added.

He also said MoH and Sarawak Health Department (JKN Sarawak) will continue to monitor the rabies situation in Sarawak.

He added they will share the latest related information to the Sarawak Department of Veterinary Services (DVS Sarawak) and DVS Malaysia to ensure that rabies prevention and control measures are implemented promptly and comprehensively.

“The cooperation of all Sarawakians is very much needed, by fully complying with all the advice from the government and the authorities to ensure that the problem of rabies in the state can be controlled. Do not let pets roam or dispose of them in public areas,” he said.