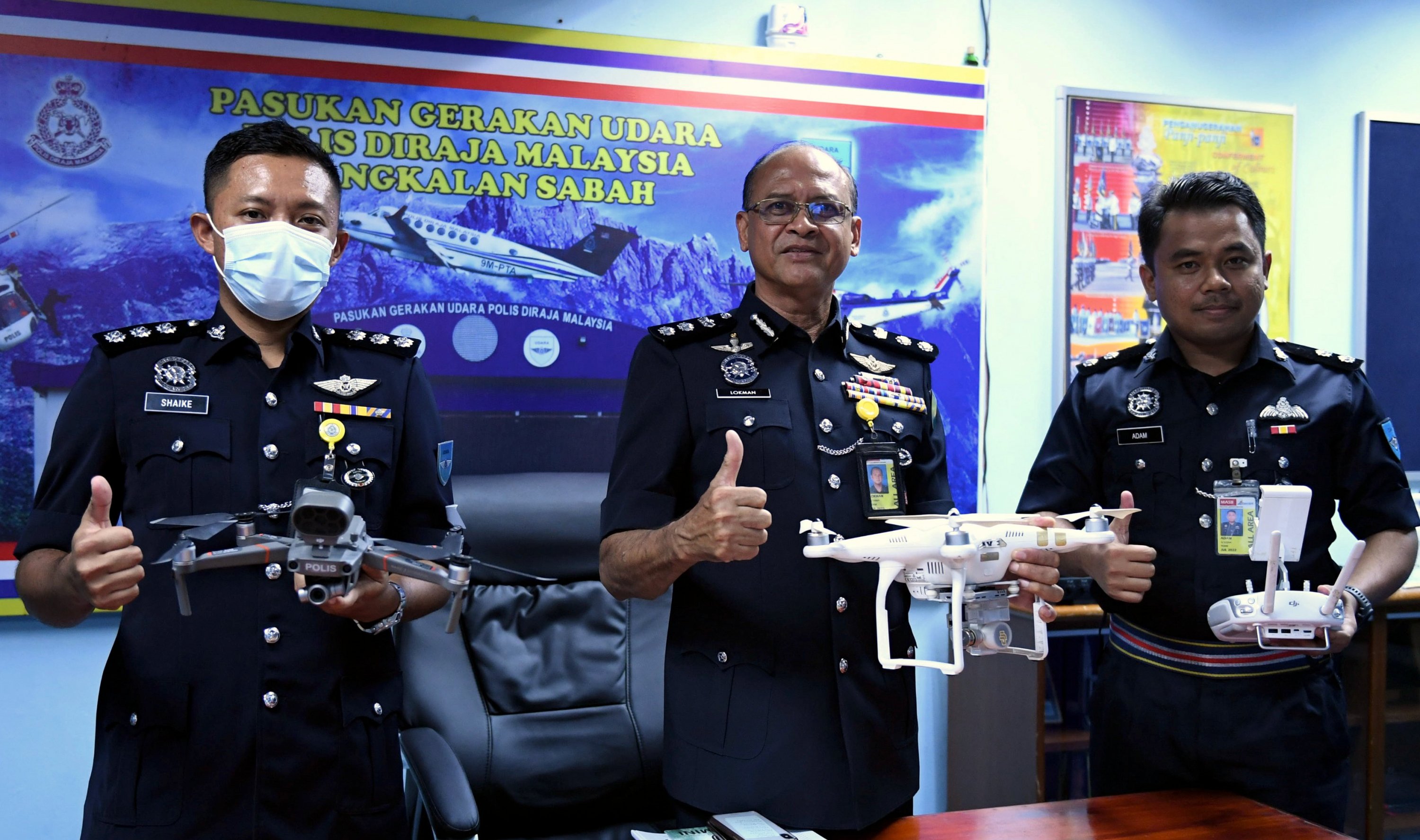 Ahmad Lokman (centre) and his personnel showing the drones which are used to monitor the SOP compliance during the Conditional Movement Control Order (CMCO) period.-Bernama photo

KOTA KINABALU: The monitoring of compliance with the standard operating procedures (SOP) under the Conditional Movement Control Order (CMCO) in Sabah is done not only in the sea and on land but also from the air, by the Sabah Police Air Wing drone unit.

Sabah Police Air Wing commander ACP Lokman Abd Hadi said over 50 operations dubbed Covid-19 Operation had been conducted by the unit since it was set up in March, including assisting Kota Kinabalu, Tuaran and Papar district police headquarters to monitor the districts.

“The drone monitoring depends on the police headquarters’ needs or the departments who requested it, and usually monitoring was done at public places such as markets, bus stops, supermarkets and housing areas, due to lack of personnel or difficulty to access certain areas,” he told Bernama.

According to Ahmad Lokman, feedback from the police headquarters showed that the air surveillance has been effective in ensuring SOP compliance.

He said the drone not only captured photos but also issued announcements in local dialects such as Bajau through its speaker, thus attracting residents to listen to the information delivered.

He explained that each drone would be flown at a height of 30 to 121 metres (100 to 400 feet) as stipulated by the Malaysian Civil Aviation Regulations (MCAR) 2016.

The flight duration depends on the operational requirements, but it is usually between 20 and 30 minutes, with the drone operated by a pilot who is assisted by three other personnel.

Ahmad Lokman said the unit has four drones, operated by eight officers and eight rank and file personnel, and each operation would only utilise one drone with the others put on standby.

“Now we are focusing on the increasing monitoring requests. Nevertheless, when we have some free time, we will ensure all pilots undergo continuous training,” he said, adding that the unit was trained by Bukit Aman drone’s unit.

On the drones’ maintenance, Ahmad Lokman said each device is maintained according to its function, by giving focus on its battery, fans and motor, and its flight hours recorded.

He said no specific posts were created for personnel operating the drones, but an application for this had been made.

The unit welcomes requests from government agencies or departments to use its service, and applications should be made through the state police commissioner.