Friday, January 21
You are at:Home»News»Sabah»Unpleasant wait at bank in Sandakan 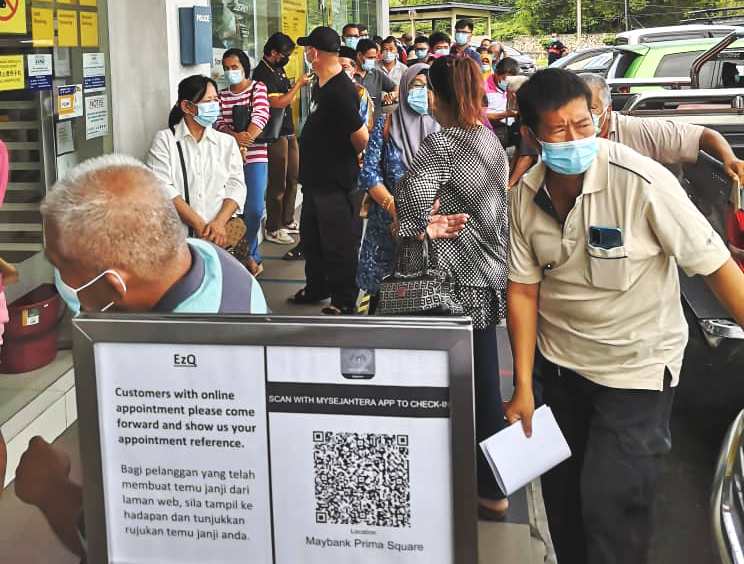 Customers waiting for their turns to do transactions at Maybank Prima Square in Sandakan.

“I was shocked to see the apparent lack of system and poor service for customers who were lining up outside the bank,” said Taren when he arrived at the bank to keep an appointment that he managed to secure online 15 days ago.

While he acknowledged that it was quite challenging to fully control the large crowd of customers waiting for their turnd to do their banking, Taren suggested that Maybank’s customer service should have at least arranged chairs for their clients to sit and so wait in reasonable comfort.

“It certainly does not reflect well on them when we see clients sitting on the walkway outside the bank while waiting in queue,” stressed Taren.

Taren said that he was fully aware that it takes time for the bank staff to ensure implementation of the various SOPs such as taking temperature and dispensing hand sanitizers for each and every customer, thus resulting in a long queue.

However, he said that setting up chairs for customers would have helped prevent the unpleasant situation of having them sitting on the walkway.

“Some other establishments and banks have made provision of chairs for their customers and I hope Maybank Prima Square will do the same,” urged Taren.

He admitted that because he had made an appointment with the bank, he was not affected by the messy queuing arrangement. However, he felt that he had to voice his disappointment to see the bank’s customers being put through such discomfort while waiting for their turn to do banking at such a renowned establishment.

“I hope the bank will take heed of my opinion and do the necessary,” he concluded.