Tuesday, April 13
You are at:Home»News»Baker shares joy of Christmas 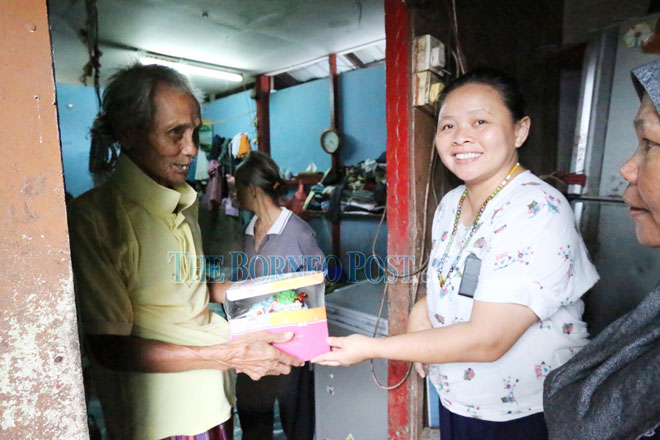 She collaborated with her friend Loh Yu Yee who is active in charity work to  deliver these cakes to the poor in Sibu town and nearby villages.

“I used to make cakes for children’s birthdays as charity work every year but this year, I didn’t.  I wanted to do something special for the poor this Christmas and contacted Loh who knows of a lot of people in need,” she said, adding that her sister helped with the baking.

Though her business was affected by Movement Control Order during the pandemic,  Ho felt blessed that her business is still on-going and wished to give back to society.

Meanwhile, Loh said she told Ho that it’s good to do something special for the poor this Christmas as the small gesture would definitely make them feel loved and supported.

Loh distributed the cakes with her team of volunteers and officers from the Welfare Department.

“I have never received a Christmas cake before, let alone have one brought to me. This is definitely something special,” said 72 year-old Mahli Sikok and Saadiah Mahtar, 59, when met on Thursday.

The couple live in a one room house with their family of five. Mahli is no longer working due to his age and Saadiah who works as a cleaner is retiring next year.

Another recipient, Amil Ubong said he looks forward to Christmas as members of St John Anglican Church come carolling at his house.

The Sibu Municipal Council (SMC) ex-staff is a stroke survivor who has been suffering from Parkinson Disease for 11 years.

“We had a band come here to celebrate Christmas with us.  I would like to thank all for the kindness shown us, not just this Christmas cake, but food given to us every month,” he said, adding that Loh gives him milk which the family cannot afford every month.