Tuesday, May 17
You are at:Home»News»Sarawak»Abang Johari: Sarawak on track to planting 35 million trees by 2025 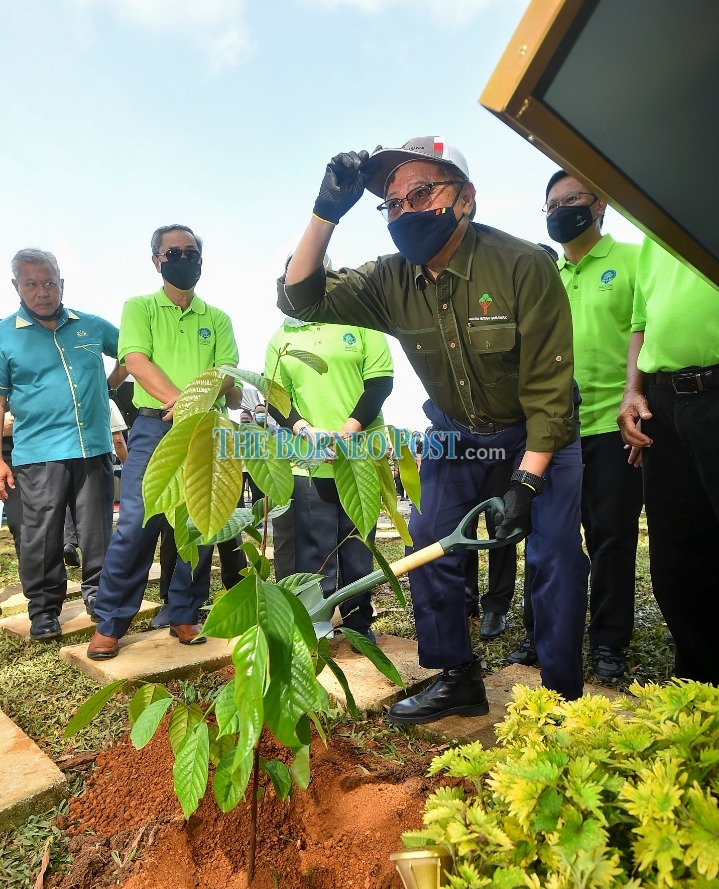 Abang Johari planting a belian tree to launch the programme at Bukit Siol, while others look on. Photo by Tan Song Wei

“We are confident that we can achieve this target easily because since June last year until Dec 20 this year, we have planted a total of 10,452,607 trees, covering 50 species, with an area of ​​9,732.14 hectares throughout Sarawak,” he said at the launch of the state-level Malaysia Greening Programme tree-planting campaign at Bukit Siol today.

Abang Johari informed that the state’s Forest Landscape Restoration programme also supports the national programme to plant 100 million trees, as initiated by the Ministry of Energy and Natural Resources.

Abang Johari called on more local communities to be actively involved in the greening programme to make it a success, including getting involved in setting up nurseries to supply commercial local tree seedlings or to provide silviculture planting and treatment services.

He pointed out that such direct involvement will be able to generate income for them as well as improve the living standards of the locals in the long run.

He said that in support of the implementation of this programme and to ensure that the valuable and high quality seeds are always sufficient, the state government through the Forest Department also redeveloped three existing nurseries namely the Sabal Forest Landscape Restoration (FLR) Centre, Simunjan, Sarawak Tree Improvement Centre, Sibu and Forest Research Station, Niah.

“This morning, we planted a belian tree that has been declared as a heritage tree of the Sarawak. We hope the next generation can see for themselves and appreciate the uniqueness of this heritage tree.

“The state government will create at least one hectare in the area of ​​Bukit Siol as a modern and well-planned ‘Taman Dirian Pokok Belian’ in Petra Jaya, as well as at other locations to be identified,” he said.